On my quest to tour and photograph most of the museums in Houston, I came across the Houston Maritime Museum.

It’s not in the museum district, but worth going to.  It’s in an old house that I think is about 75 years old.

The admission is $5.00, which is quite reasonable to see all of the cool things they have inside.

The first model I came across was this one and I knew I was going to see some pretty cool stuff this day. 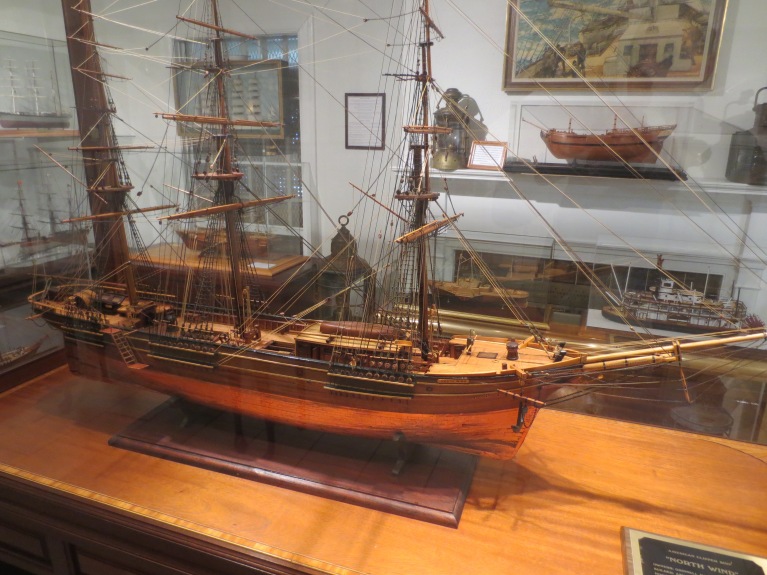 There were several military ships on display. 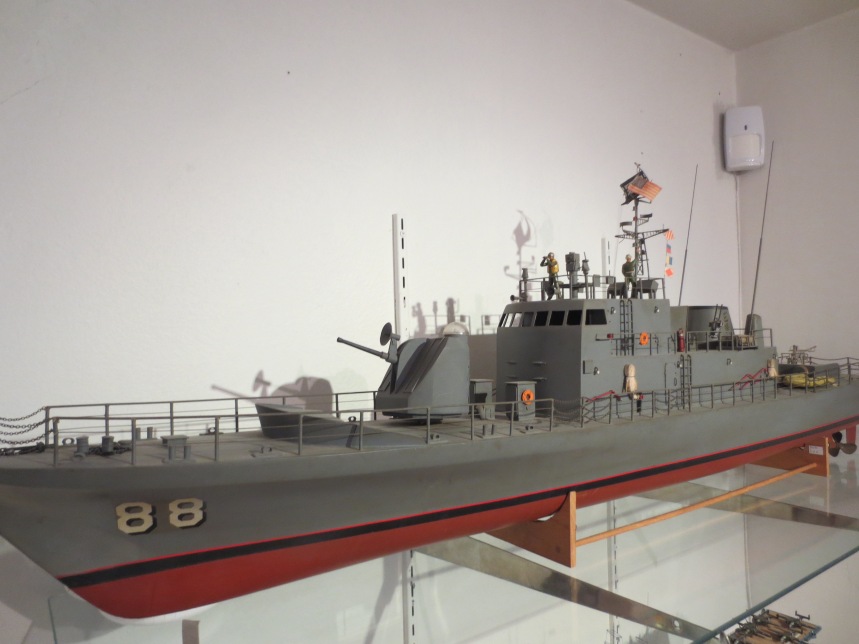 This one had the water in waves on the side of this ship.  It made it look that much better. 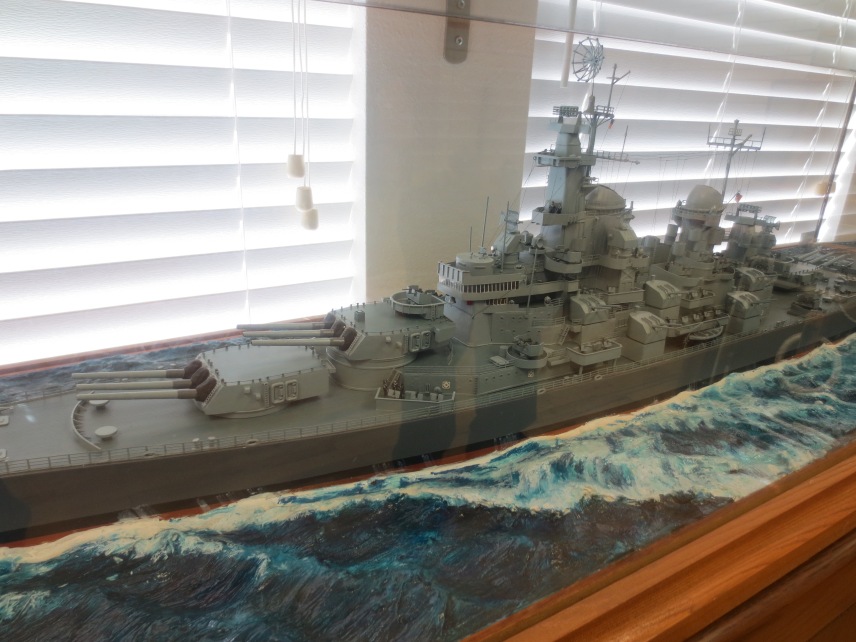 Here’s another with the water.

They even had a U – Boat.  Most say submarine. 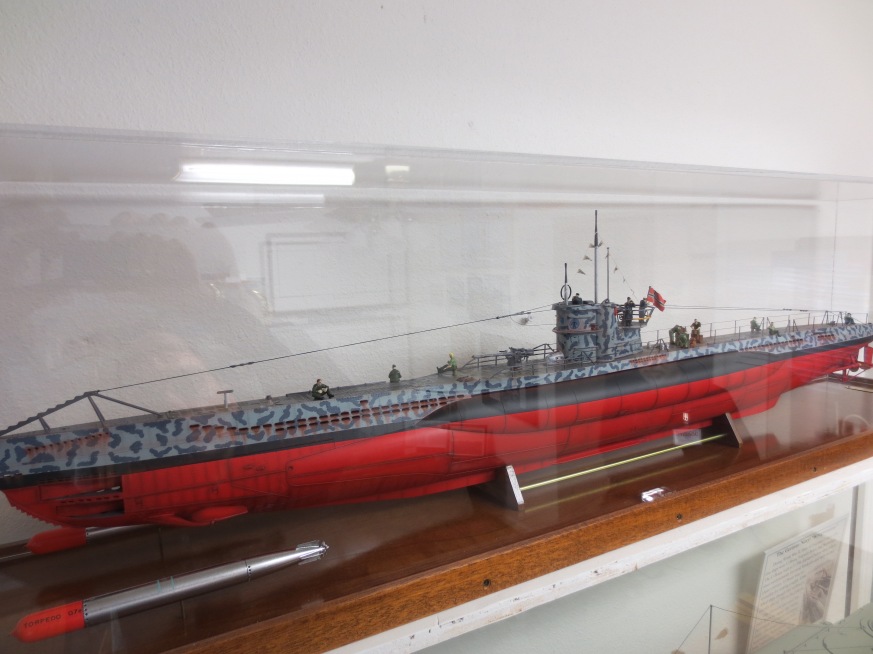 This photo came out good.  Some of my others didn’t because of reflections on the glass cases the ships and boats were in.

Their attention to detail was superb.

I wonder how many hours to create something like this boat.  I like the colors with the white. 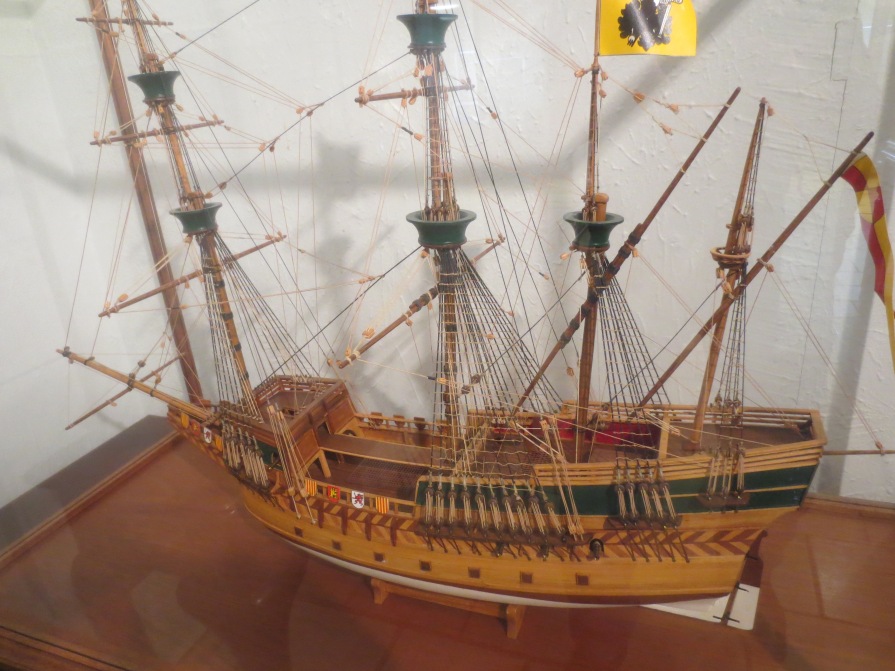 Seeing this Riverboat that was operated by steam was very cool indeed.  Lots of fun was had on these boats back in the day.

This model had some very large sails on it.  It’s small with large sails so I bet it was very fast in the water.

Here’s a model of a working vessel.  Notice the Heli – Pad in the rear.

Here’s another boat with lots of color.  Very nice. 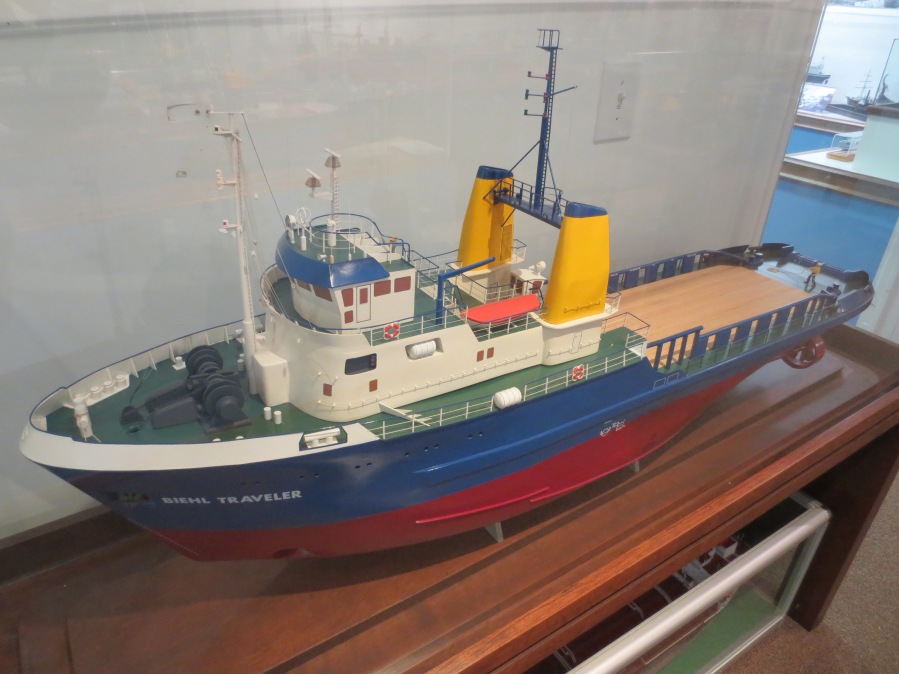 These next four photos are of models of offshore oil rigs.  I was really impressed with them. 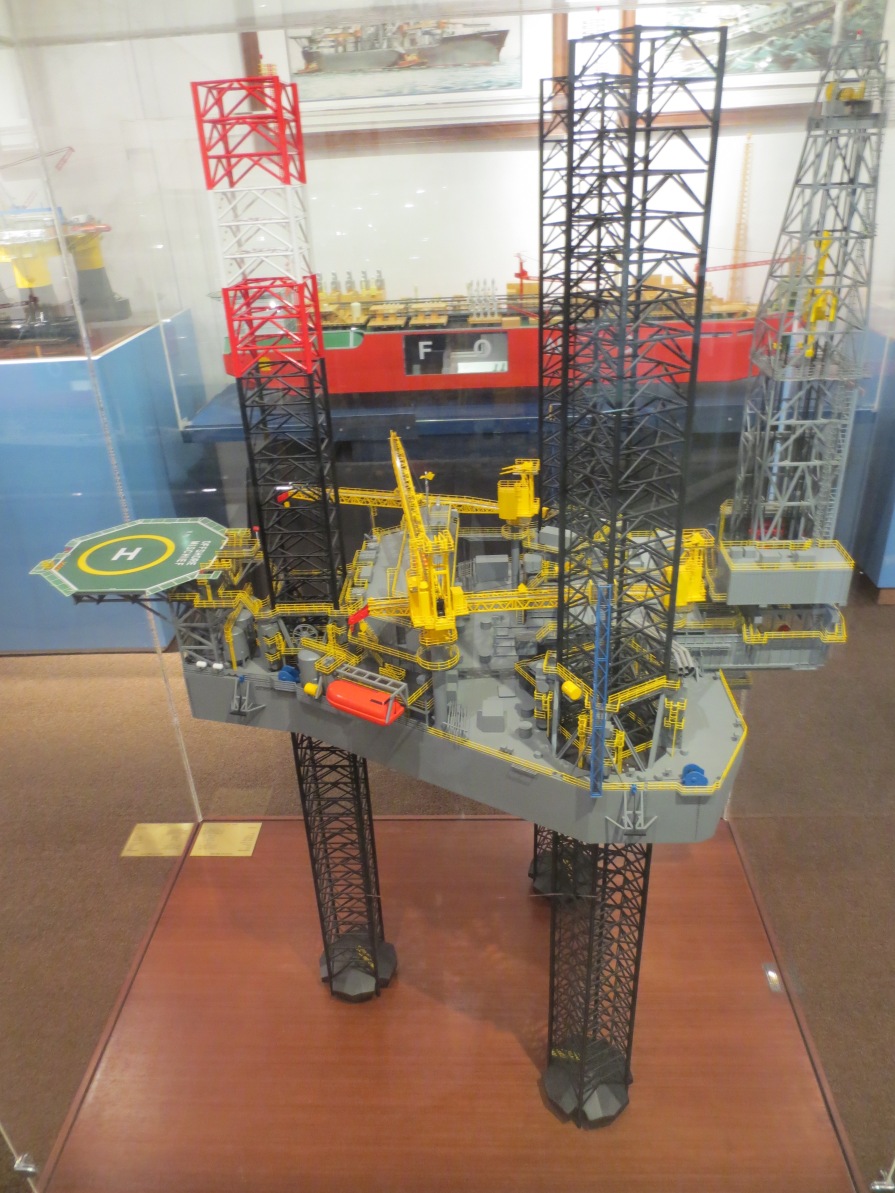 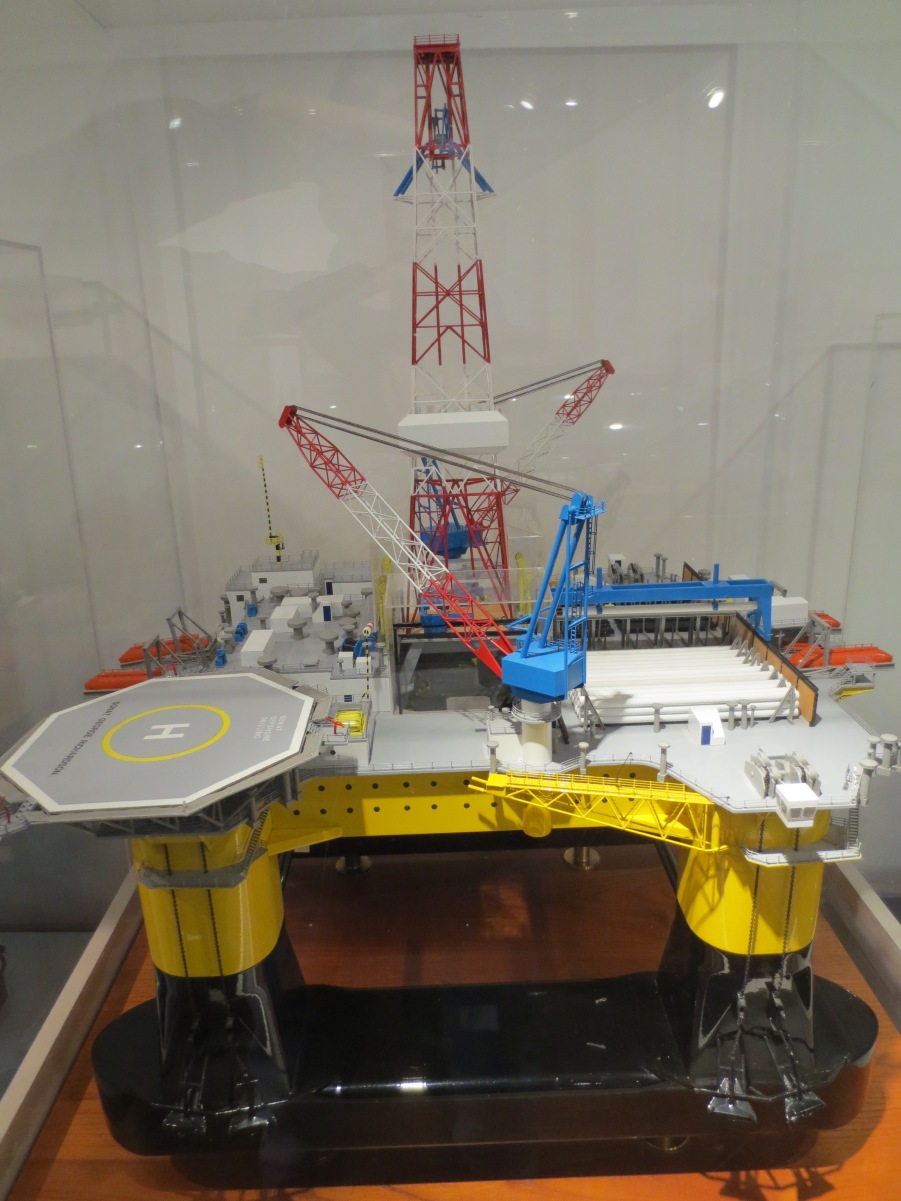 This ship was huge.  It dominated the room, with it being in the center and so large.

This was beautiful to see up close and in person.  The photos are good but not nearly as good as being there.

Pirates believed that having women on board their ship was bad luck. They also believed that whistling on a ship would cause the weather to turn stormy; as in ‘to whistle up a storm’. 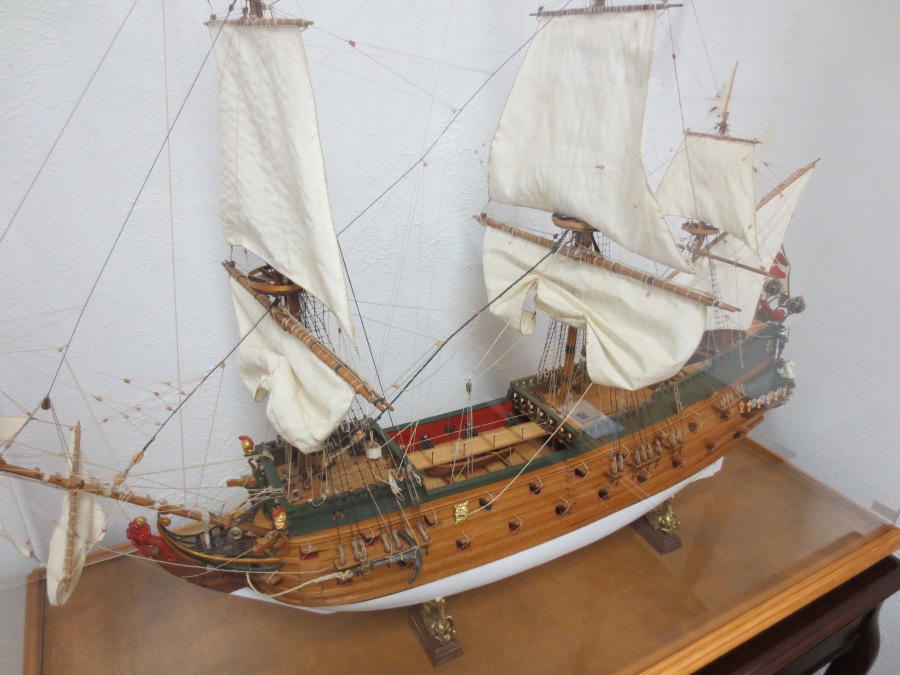 Almost all pirates stole their ships because they couldn’t buy ships in case they got caught and sent to jail.

Once they had taken over a ship they had to convert it for pirate life, this usually meant making more room for sailors to live on board and strengthening the decks to hold the weight of the heavy cannons.

Although pirates have been around since the 15th century, most pirating happened between 1690 and 1720. 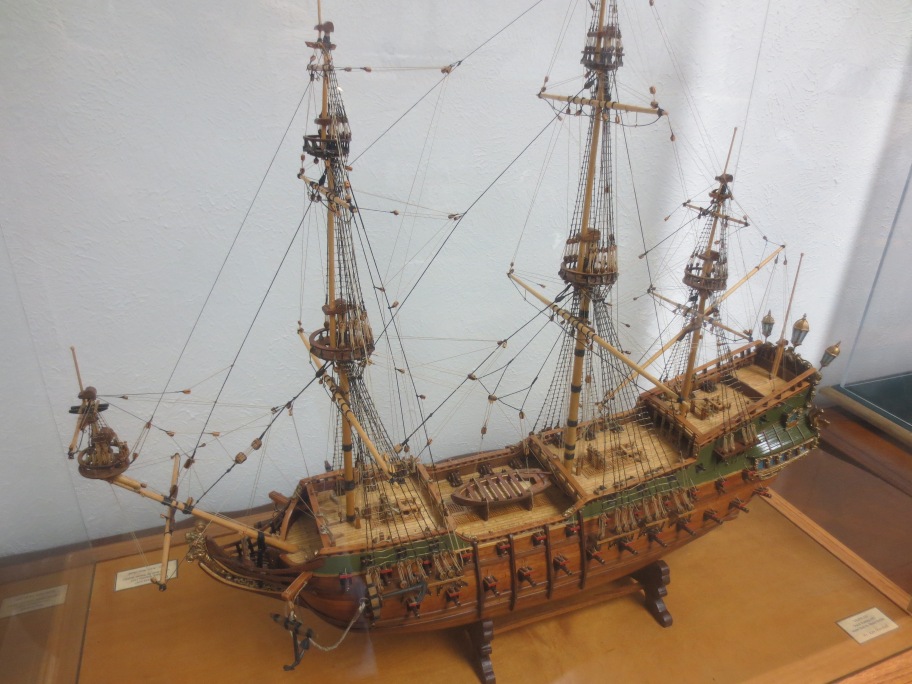 This model has the actual helicopter on the back.  It’s yellow.

Here is a Steam Liner that was used to make ocean voyages.  The Titanic was similar.

I hope you have enjoyed this look at the Houston Maritime Museum.  There are many more models of ships and boats to see other than the ones in this blog article.

I’d like to thank the Docent, Eric Young for walking around with me for a while and taking the photo below for me.  He’s very nice and very knowledgeable.

I enjoyed my trip to this museum and writing this article for you to see some of the very cool models on display.

I attended the Houston Boat Show on the last day of the show this year.  I almost forgot about it.

I like going when there are not as many people because I get better photos of the boats without having a lot of other people in the picture.

The Boat Show has everything to do with boats that you could think of.

The first thing I saw when I walked in the doors were these very large and very expensive motors. 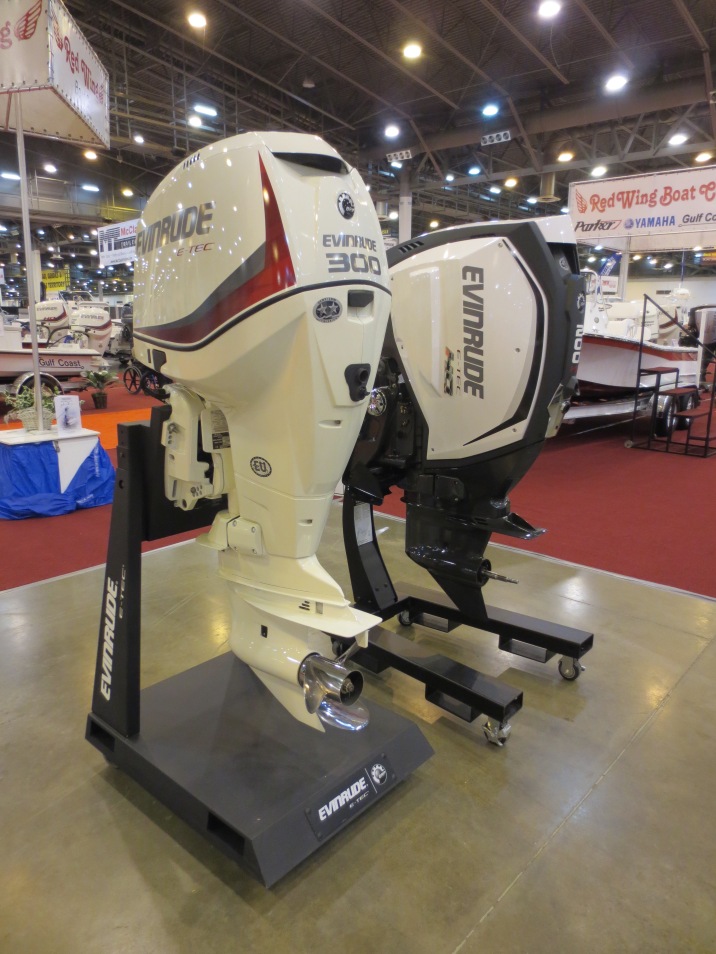 These days, boats are looking more and more cool. 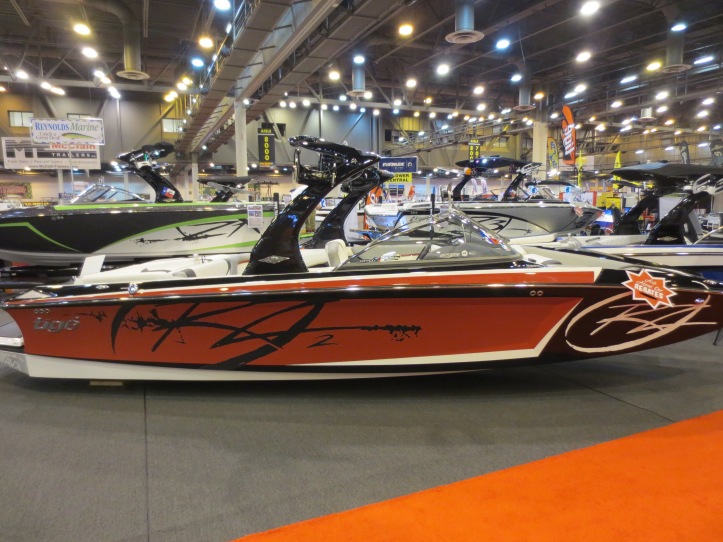 There were so many boats to see this year. 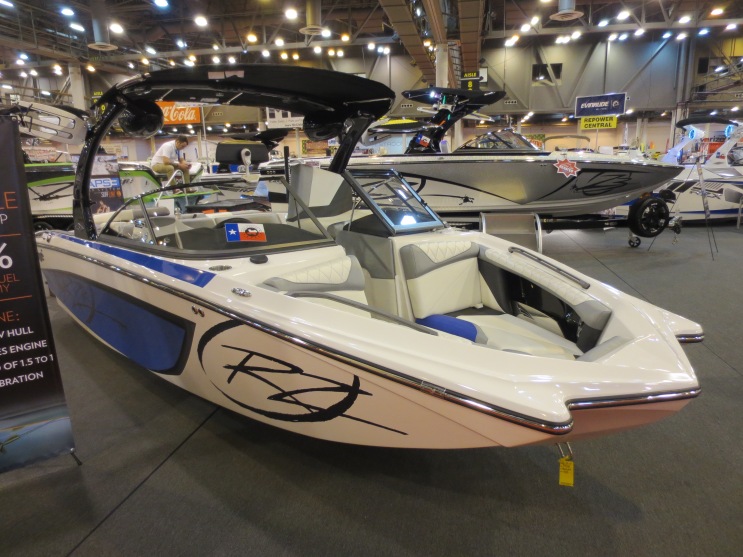 Here’s the control panel for the boat above.  Very cool. 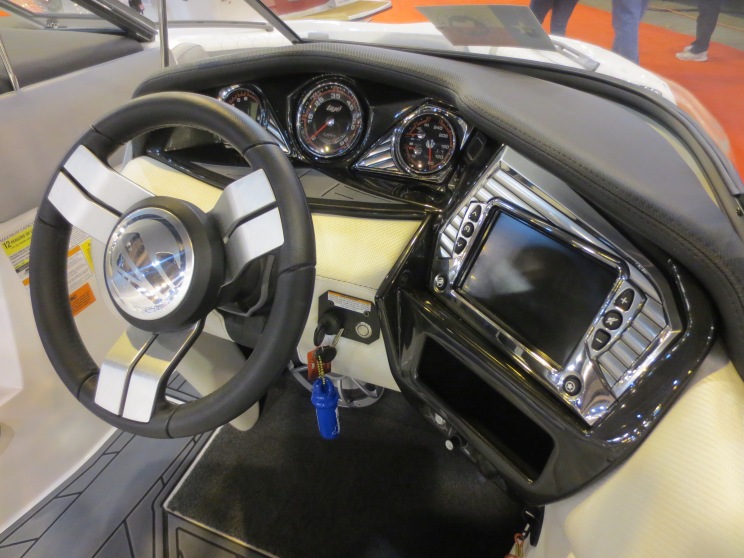 They had a racing boat on display.  It looks huge when viewed at this perspective. 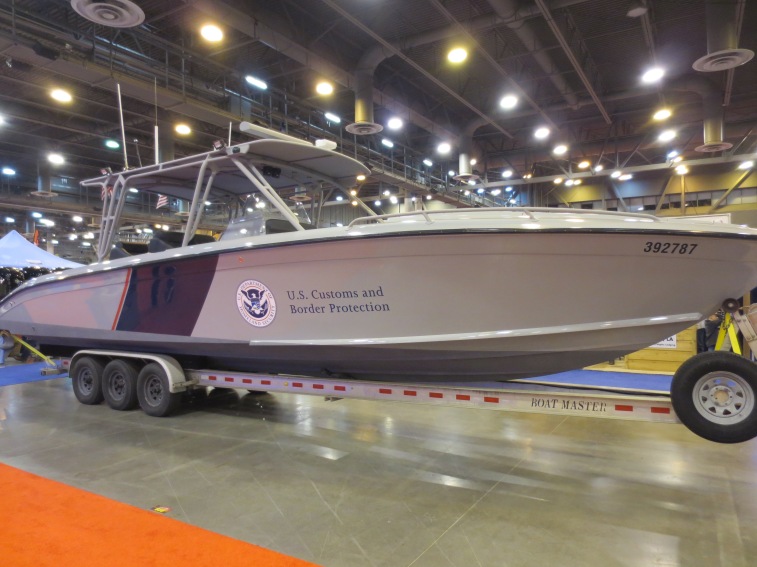 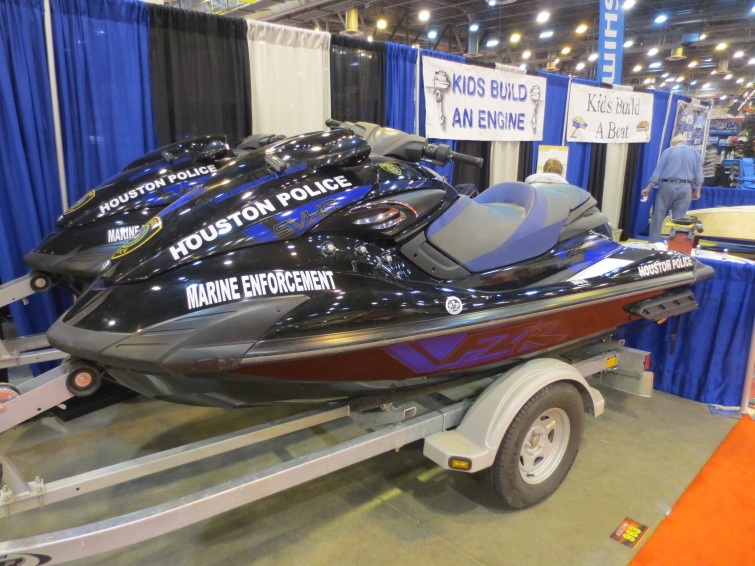 There was apparel on sale at the show.

You could also buy a new fishing rod. 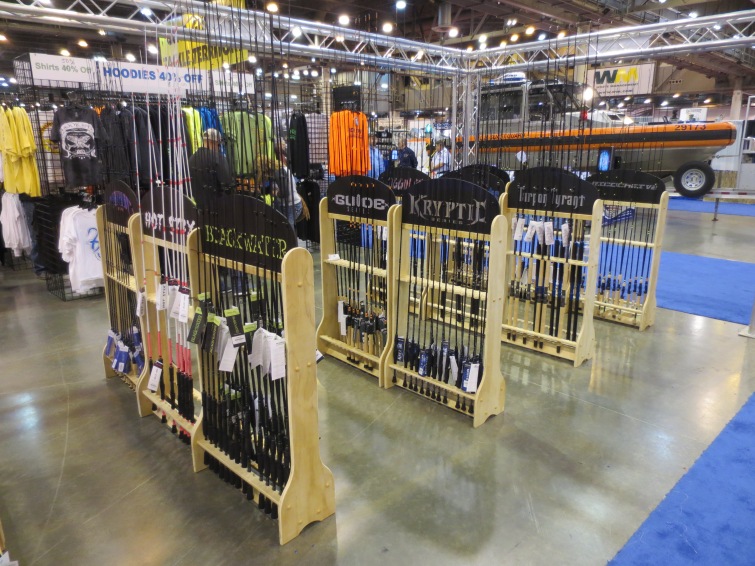 I seem to like the darker color boats more than the white ones.

I like when they put the boats in this position. 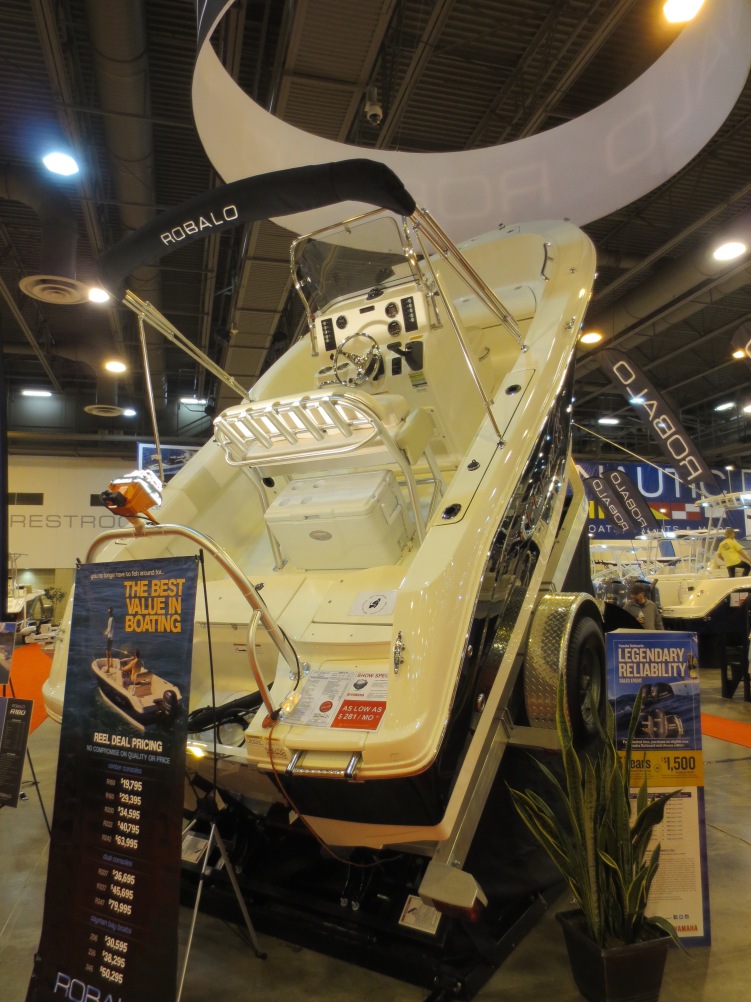 This was a nice looking boat.

This boat had a video screen behind it playing someone skiing behind the boat as a simulation.

I like this boat design, but I’m not a fan of the color green on it.

This might have been one of the more expensive boats at the show.

Whereas this was probably one of the cheaper.  This boat is for fishing and you have plenty of room to stand and cast your line off of the deck.  Those open doors are where you can store the fish you catch.

There were boats everywhere.  I always wonder how long it takes them to set all of the boats up and how long to get them out of the arena. 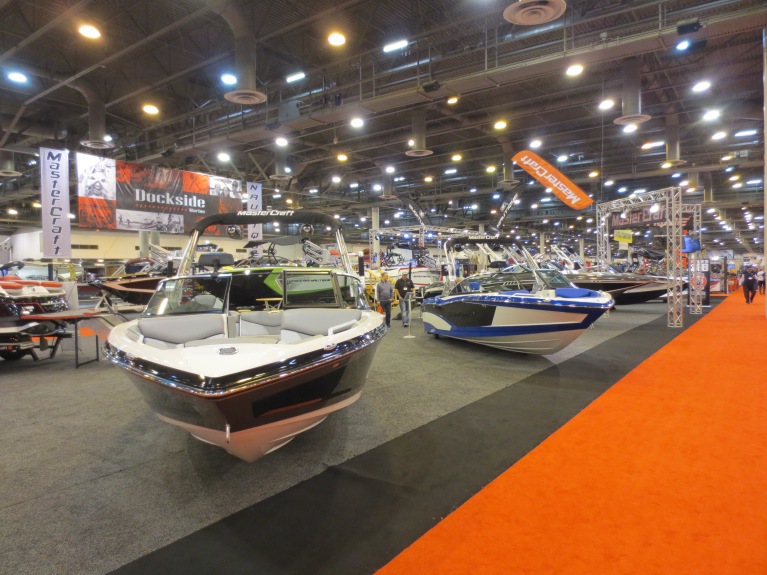 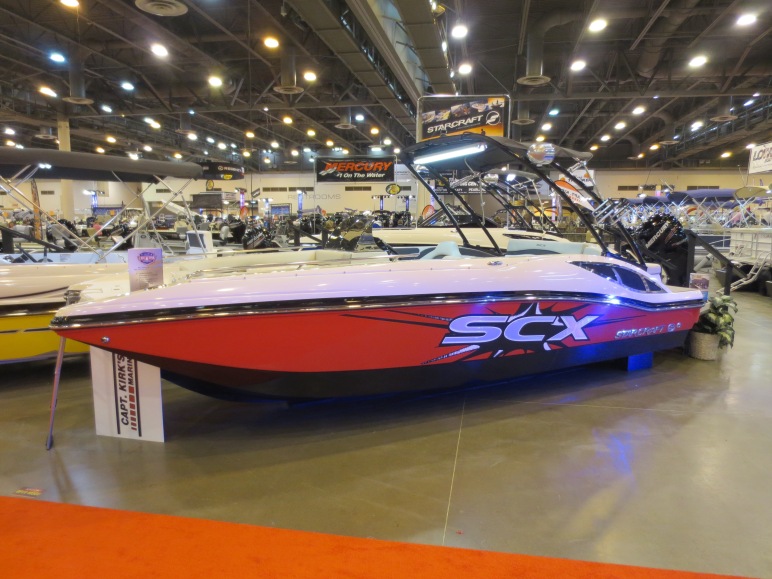 I like this one more because of the black color.

Here’s another boat with that color green.  It must be a popular color among boat owners or designers. 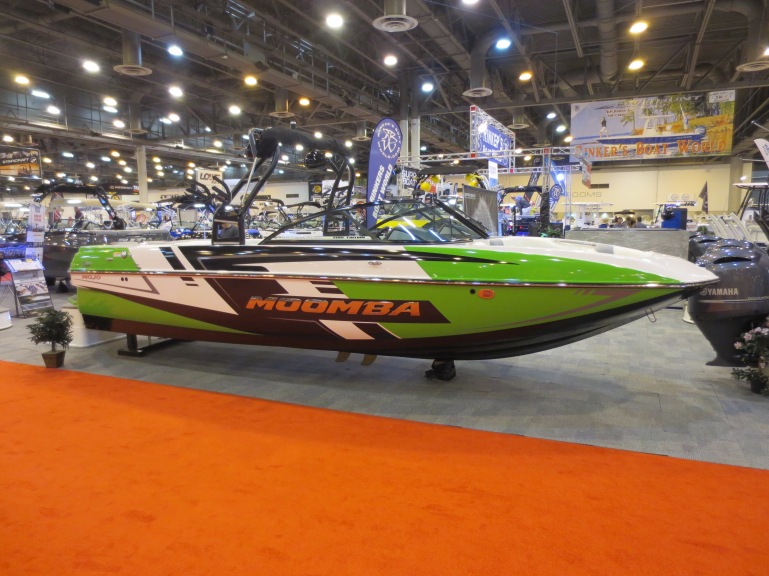 When the boats are in this position, you can see all of the seating room very easily.

There was a very large number of pontoon boats. 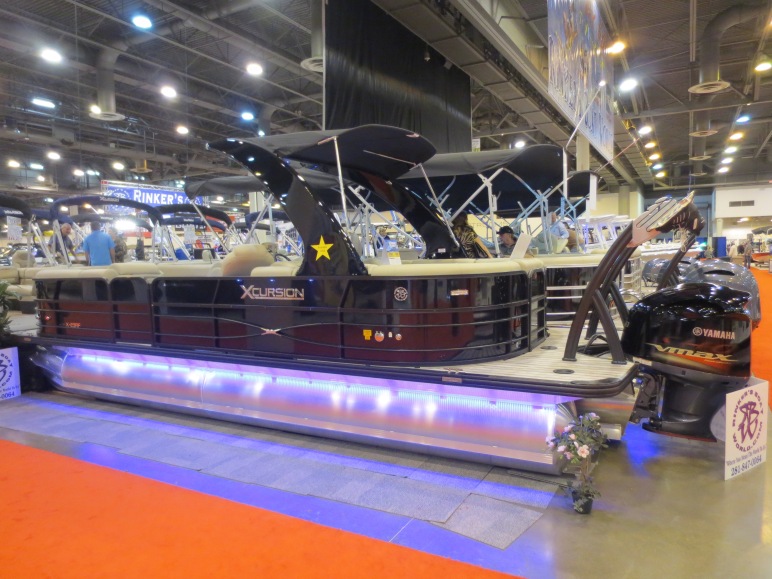 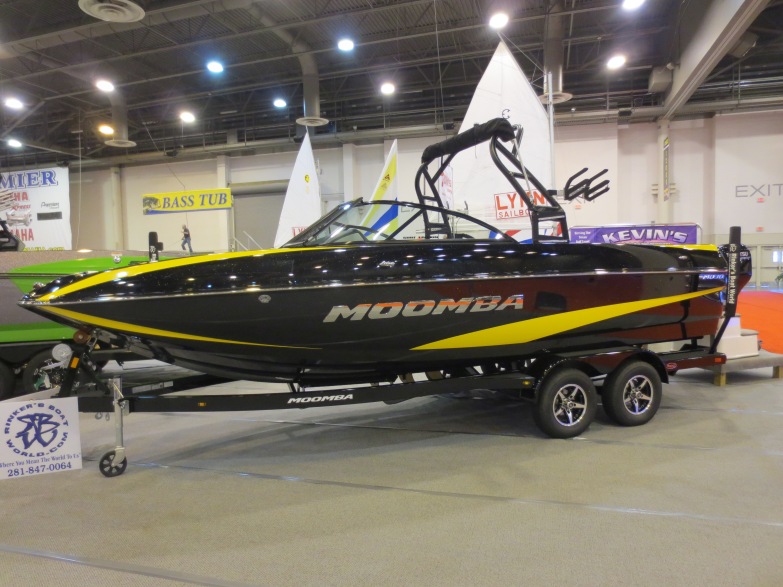 They were showing 4 wheelers and motorhomes also.

Here’s a view of some of the boats on display. 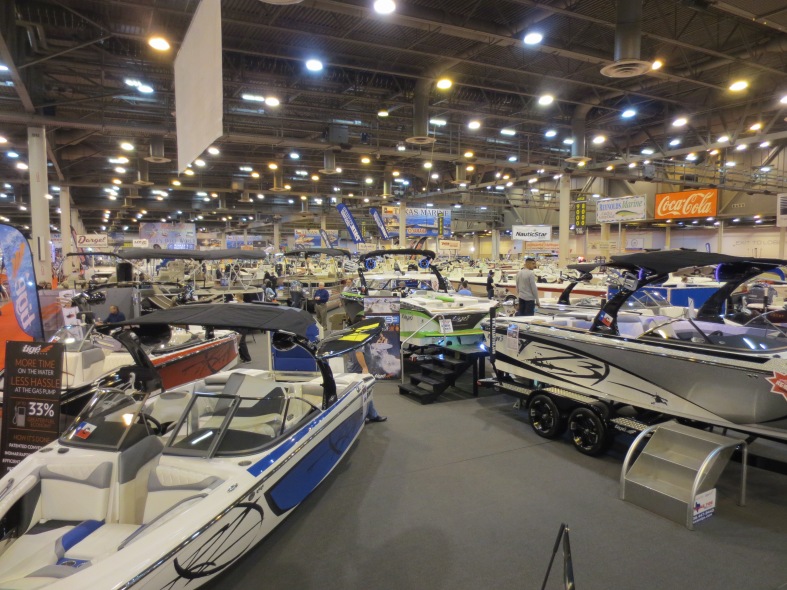 I hope you’ve enjoyed this look at the Houston Boat Show.  The Auto Show is the next show that I’m attending. 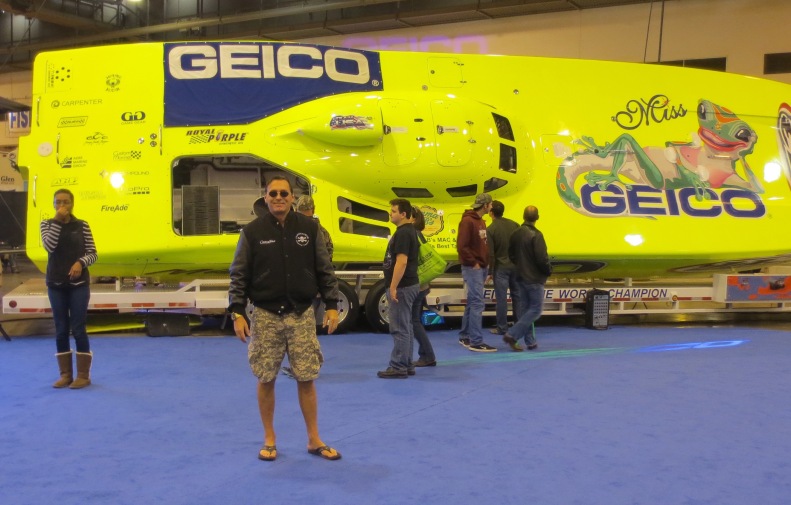