I’ve been to Indianapolis many times for the Indy 500 and NASCAR’s Brickyard 400 races.

I decided to go check out their zoo when I was in town one time.

This article is about that visit to their zoo.

I didn’t get as many reptile photos as I usually do, but I saw something at the Indy Zoo that I had not seen at any other zoo.

The water for the seal was beautiful.  I went on a hot day and that water looked so inviting.

Many people lump seals into the same category as whales and dolphins.

While they do have quite a few similarities, there is one fact that sets them apart.  All species of seals give birth to their offspring on land rather than in the water.

As most people know, about 70 percent of the Earth’s surface is covered in water.

All said and done, there’s about 332.5 million cubic miles of water on the planet, and the seas and rivers and oceans that hold all that water are still some of the most poorly understood regions on Earth

I’ve seen polar bears at other zoos too, and they’re always sleeping.

Polar bears are the largest land carnivores in the world, rivaled only by the Kodiak brown bears of southwestern Alaska.

Polar bears sit at the top of the food chain in the biologically rich Arctic.

The most carnivorous of the bear species, polar bears feed primarily on the fat of ice-dependent seals.

All 17 species of penguins are naturally found exclusively in the Southern Hemisphere. 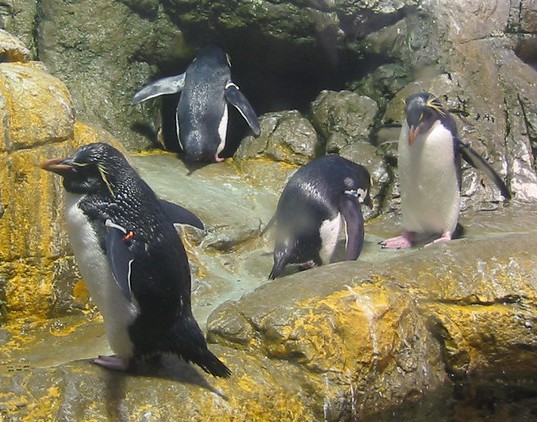 Emperor Penguins are the tallest species, standing nearly 4 feet tall.  The smallest is the Little Blue Penguin, which is only about 16 inches. 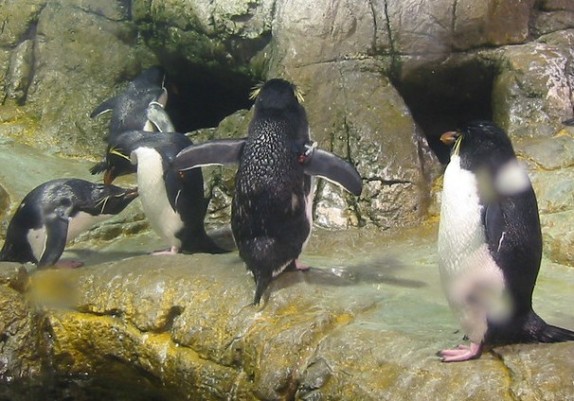 The fastest species is the Gentoo Penguin, which can reach swimming speeds up to 22 mph.

Penguins’ striking coloring is a matter of camouflage; from above, their black backs blend into the murky depths of the ocean.  From below, their white bellies are hidden against the bright surface. 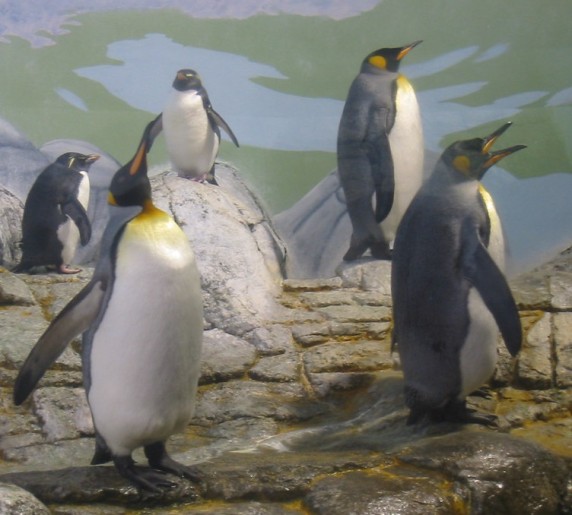 Fossils place the earliest penguin relative at some 60 million years ago, meaning an ancestor of the birds we see today survived the mass extinction of the dinosaurs.

Penguins ingest a lot of seawater while hunting for fish, but a special gland behind their eyes, the supraorbital gland, filters out the saltwater from their blood stream.  Penguins excrete it through their beaks, or by sneezing. 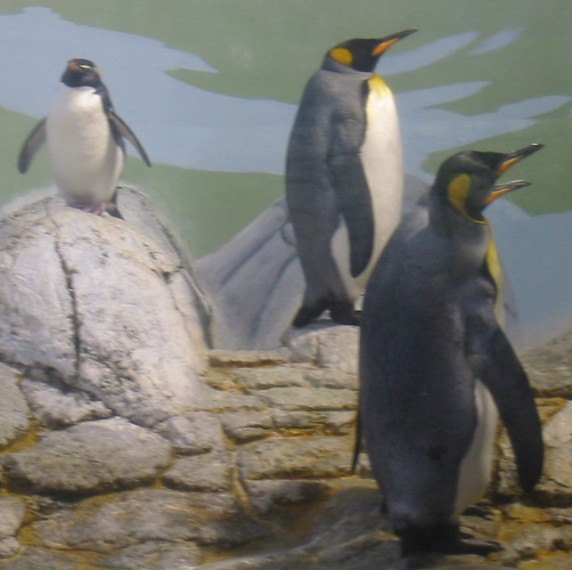 Unlike most birds, which lose and replace a few feathers at a time, penguins molt all at once, spending two or three weeks land-bound as they undergo what is called the catastrophic molt.

All but two species of penguins breed in large colonies of up to a thousand birds. 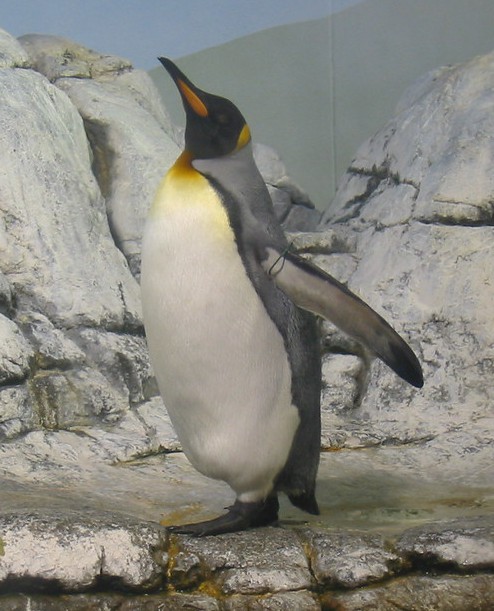 There are around 372 different parrot species.

Parrots are believed to be one of the most intelligent bird species. 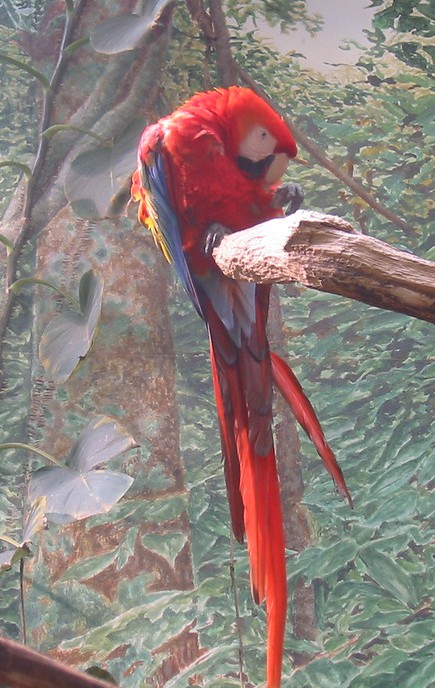 Some species are known for imitating human voices.

Most parrot species rely on seeds as food.  Others may eat fruit, nectar, flowers or small insects. 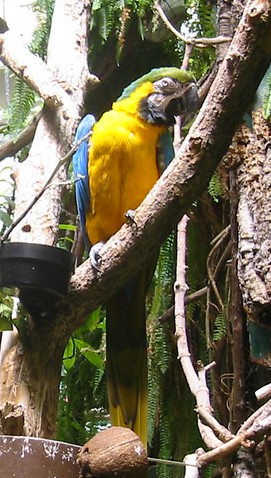 Old and injured tigers have been known to attack humans and domestic cattle. 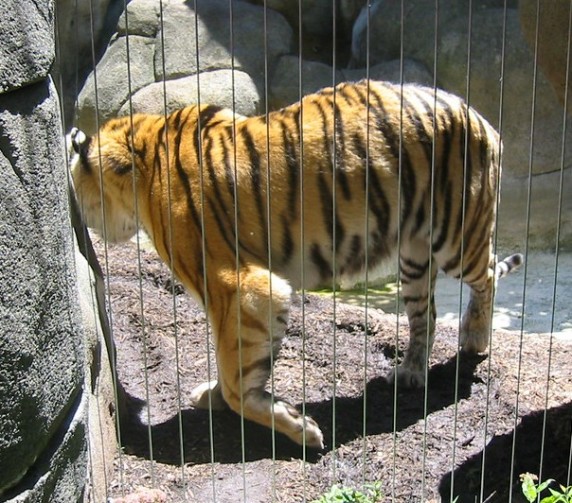 They are mostly nocturnal (more active at night) and are ambush predators that rely on the camouflage their stripes provide.

Tigers use their body weight to knock prey to the ground and kills with a bite to the neck.

Zebras are members of the horse family.

They have excellent hearing and eyesight and can run at speeds of up to 35 miles per hour. 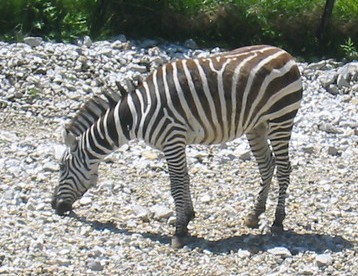 Usually the lead male of the herd, called a stallion, stays at the back of the group to defend against predators, if necessary.

When zebras are grouped together, their stripes make it hard for a lion or leopard to pick out one zebra to chase.

The elephant’s trunk is able to sense the size, shape and temperature of an object.

An elephant uses its’ trunk to lift food and suck up water then pour it into its mouth.

These elephants had a very nice habitat at the Indy Zoo. 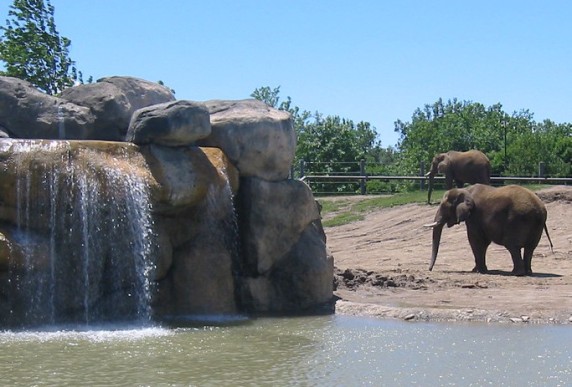 Some scientists believe that an elephant’s trunk is made up of 100,000 muscles, but no bones.

Kangaroos are the largest living marsupials from the family Macropodidae.

I was excited to see that this zoo had rhinoceros. 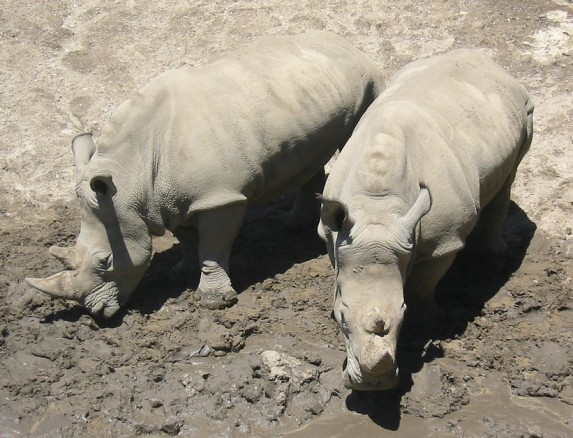 Because the animals’ horns are used in folk medicine for their supposed healing properties, rhinos have been hunted nearly to extinction. 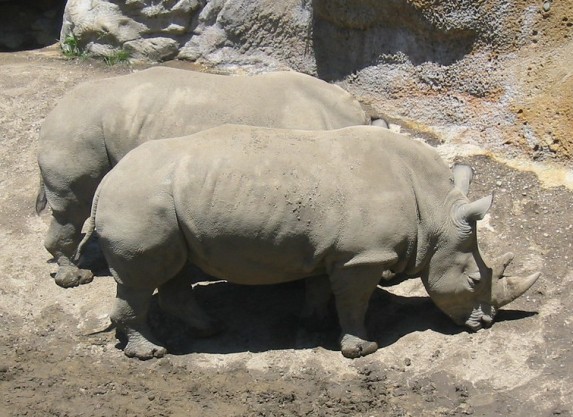 Their horns are sometimes sold as trophies or decorations, but more often they are ground up and used in traditional Chinese medicine.

The powder is often added to food or brewed in a tea in the belief that the horns are a powerful aphrodisiac, a hangover cure and treatment for fever, rheumatism, gout and other disorders, according to the International Rhino Foundation.

They can eat thorny plants without hurting themselves because the inner surface of their mouth is hard.

Giraffe don’t drink too much water and can survive without water longer than a camel.

When they drink water, they need to spread their feet to reach the surface of the water because their neck is shorter than their front limbs.

This posture is dangerous because giraffe lose their  stability, can’t see sneaking predators and can’t achieve speed necessary to run away from the danger. 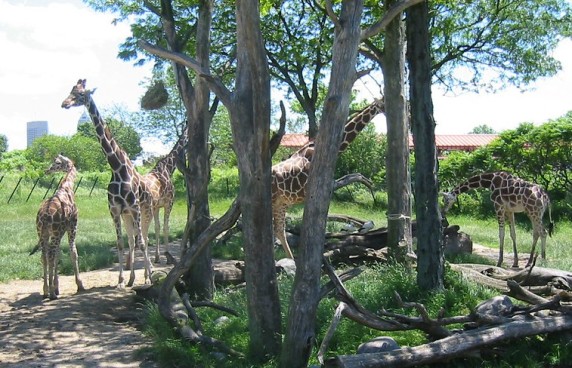 The flightless ostrich is the world’s largest bird. 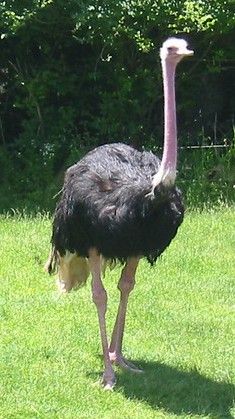 Ostriches are the fastest runners of any birds or other two-legged animal and can sprint at over 45 mph, covering up to 5 yards in a single stride. 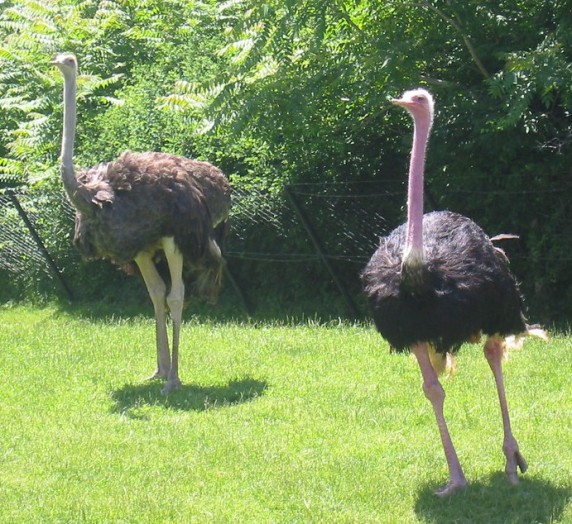 Ostriches’ running is aided by having just two toes on each foot (most birds have four), with the large nail on the larger, inner toe resembling a hoof.

I saw a horse at the Indy Zoo.  You don’t usually see regular animals at a zoo. 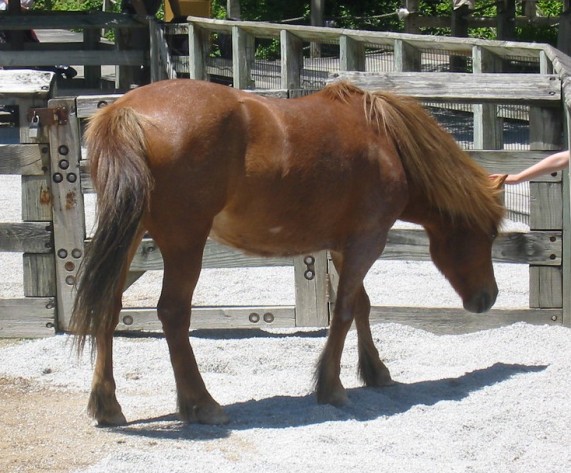 There was also a bull.

There was a place for the kids to take horseback rides.  This was great fun for the children. 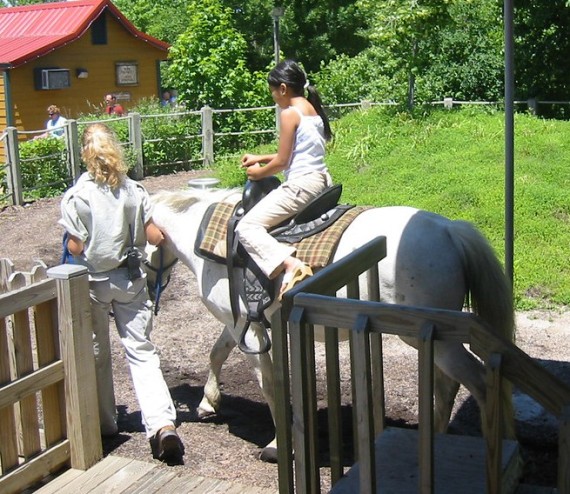 Now for the few reptiles that I did get.

There are some species of Lizards that have the ability to squirt blood out of their eyes. They have horns and they are able to squirt blood for a distance of up to 4 feet.

This is a way for them to be able to defend themselves against predators or when they feel there is any type of threat to them.

Turtles have been on the earth for more than 200 million years.

They evolved before mammals, birds, crocodiles, snakes, and even lizards.

The earliest turtles had teeth and could not retract their heads, but other than this, modern turtles are very similar to their original ancestors.

Indy had what I call the prerequisite ‘Big Snake.’

They had this display of snakes’ skeletons.  I had never seen anything like this before and I thought it was cool.

Venomous snakes have special glands and teeth designed to inject venom into their prey. 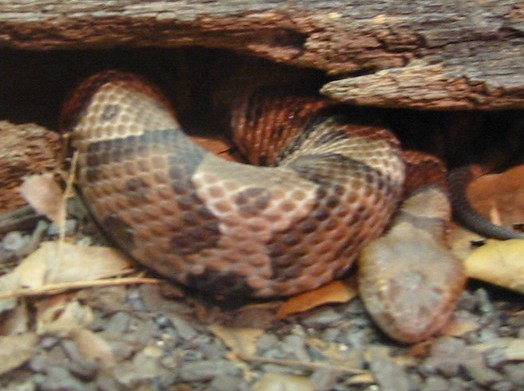 There are around 700 different species of venomous snakes.

Indy had some very good displays for their snakes. 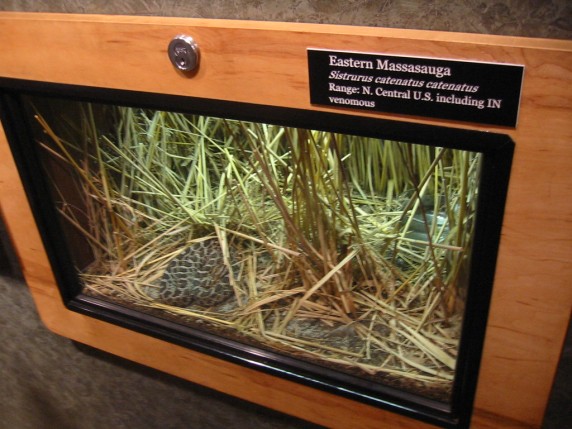 Each snake had a nice habitat, and the label for the snake was easy to find and read the facts about each one.

What the Indy Zoo had that I had never experienced at a zoo before was the Butterfly Area. 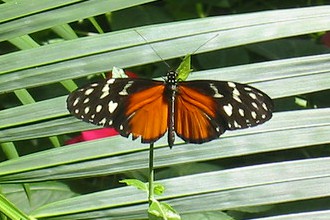 They had a large enclosed area with lots of sunlight and many butterflies. 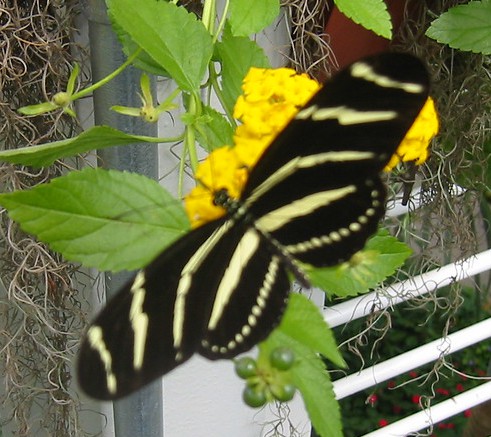 I think butterflies are beautiful.

They had little plates set up with pieces of oranges and bananas for the butterflies to eat.

A butterfly’s lifecycle is made up of four parts, egg, larva (caterpillars), pupa (chrysalis) and adult. 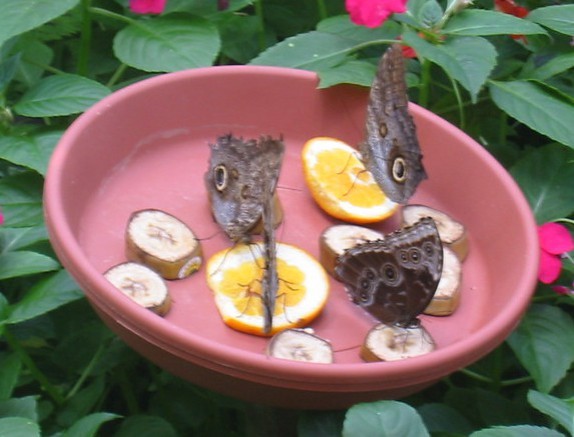 Most caterpillars are plant eaters (herbivores).

Butterflies attach their eggs to leaves with a special glue.

This was a nice feeder.  It probably has ‘sugar water’ in it. 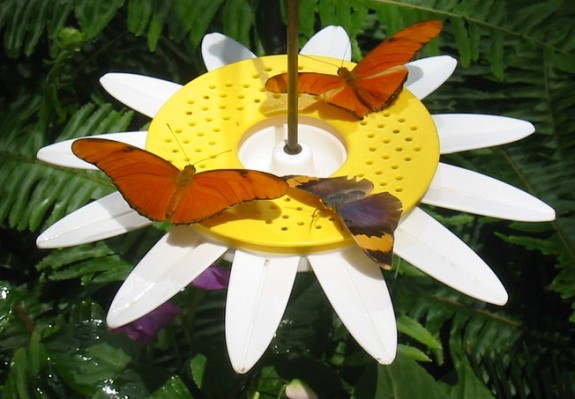 Butterflies can live in the adult stage from anywhere between a week and a year, depending on the species.

I hope you have enjoyed seeing my photos from the Indy Zoo and reading about the animals and butterflies.

I have over 25,000 travel photos on my website, as well as my videos, for your viewing pleasure.