Of all the museums I’ve been to, the Louvre in Paris is my favorite.  One of the most famous paintings in the world, if not the most famous, is housed in the Louvre.  It’s the Mona Lisa.  The Mona Lisa is a painting by the Italian artist Leonardo da Vinci and was painted between 1503 and 1506. 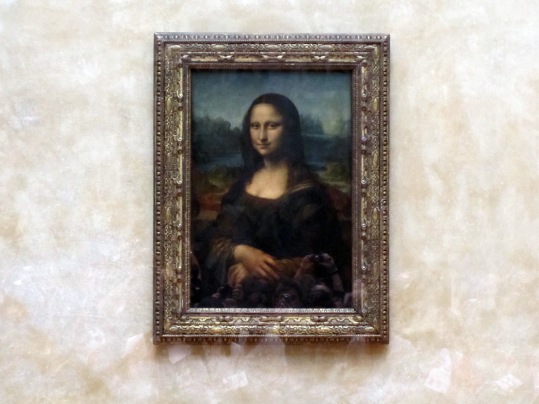 The Mona Lisa has been acclaimed as the best known, most visited, most written about, most sung about and most parodied work of art in the world.  When my sister was getting married along the Italian Riviera, I decided to go to Paris first and one of the things I so deeply wanted to do was see the Mona Lisa.

Many have said that the Louvre doesn’t allow you to take pictures of the Mona Lisa because the flashes from cameras will ruin the painting but this is not true.  The Mona Lisa is behind a protective glass and everyone who goes to visit the painting gets several pictures of her.  I took my share as well.

I also videotaped the room where she is kept and the large crowd in front of her.  It takes you a while to make your way to the front of the crowd to get your turn to take your pictures and you have to use a little force to get through the huge group of tourists.  In the picture below, you’ll see a large crowd and the Mona Lisa on the far back wall.

This picture shows you just how crowded the room housing her gets during museum visiting hours. 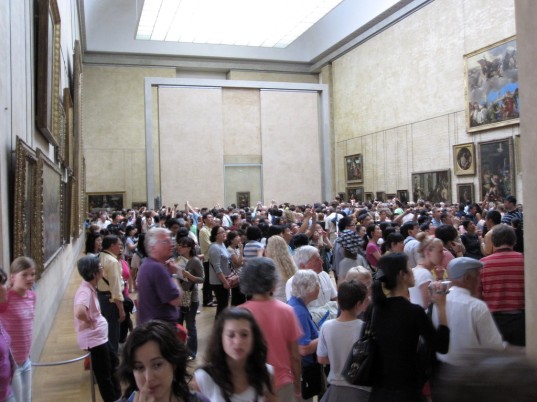 Many don’t know that the Mona Lisa hung in Napoleon’s bedroom for a brief period of time.  The painting really began to grow in fame after it was stolen in 1911 by a museum employee who hid in a broom closet until after the museum closed and then walked out with it under his coat.

The thief was an Italian patriot who believed the painting should be displayed in an Italian museum instead of Paris.  He was caught and the painting was recovered two years later when he tried to sell it to a gallery in Florence.  It was returned to the Louvre in 1913.

In 1956, a vandal threw acid at the painting and damaged it and on December 30 of that same year the painting was again damaged when a rock was thrown at it.  The result was the loss of a speck of pigment near the left elbow, which was later repaired.

The Mona Lisa now rests behind bulletproof glass.  In 1974, a handicapped woman sprayed red paint on the painting while it was on display at the Tokyo National Museum because she was upset with the museum’s policy for disabled people.  No damage was done to the painting.

And in August of 2009, a Russian woman was upset at being denied French citizenship so she bought a terra cotta mug from the museum gift shop and threw it at the painting.  Again, no damage was done to the painting.

As I said earlier, I’ve been to many museums in my travels but seeing the Mona Lisa is definitely the highest point.  I think anyone who travels, dreams of going to Paris and seeing its’ monuments like the Eiffel Tower and Notre Dame but no trip to Paris would be complete without gong to the Louvre and seeing the most famous painting in the world, the Mona Lisa.

I enjoyed writing this post and I hope you’ve enjoyed reading it and learning about the Mona Lisa.  If I had a genie grant me some wishes, I’d use one to wish that everyone reading this could go to Paris and see the Mona Lisa for themselves.  It’s an amazing experience being that near to a work of art that has so much History and one that has been viewed so many times. 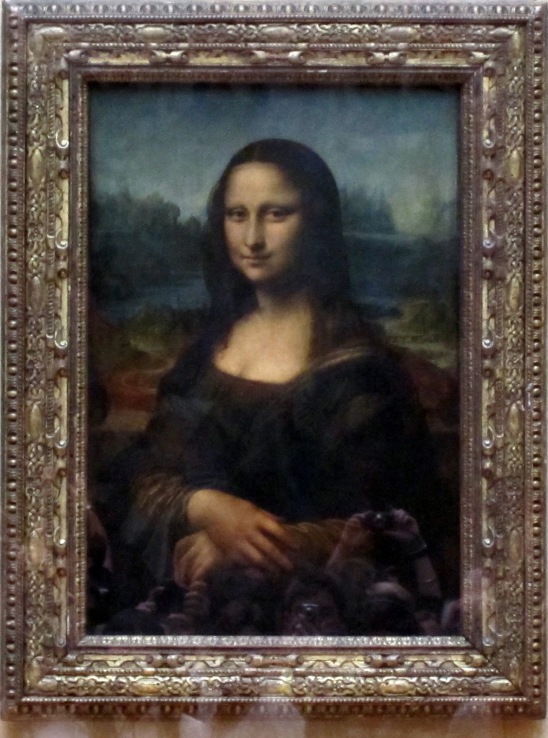 I have over 25,000 travel photos on my website, so check it out when you have time.  I’m sure you’ll see something you like.

Also, you can ‘Like’ my Facebook page for updates about what events and places I will be traveling to next.