In my previous Blog post, I showed the lights of River Oaks.  In this post, I’ll show you the lights of Tanglewood, another affluent area of Houston.

Tanglewood has some really nice big homes, but the decorating is not nearly as good as River Oaks.

There were some nice decorating jobs, but quite a few half assed jobs as well.

This first house had potential, but they decided to let the lights around the windows just dangle instead of bordering the bottom of the windows.  Also, they had a bulb out on the middle window.

Here’s the first example of a half assed job.  This looks like a job where the light hangers got lazy.

This house had the trees done well and the front hedges look nice, yet they opted to leave house lights off and it would have completed the job.

This is another job with nice trees and a good sidewalk border, but again, they left off the house lights.

I liked the house lights on this home, but they had a few bulbs out that ruin the effect.

This house did a good job with the house and sidewalk, but they should have wrapped the big tree to the right of the picture. 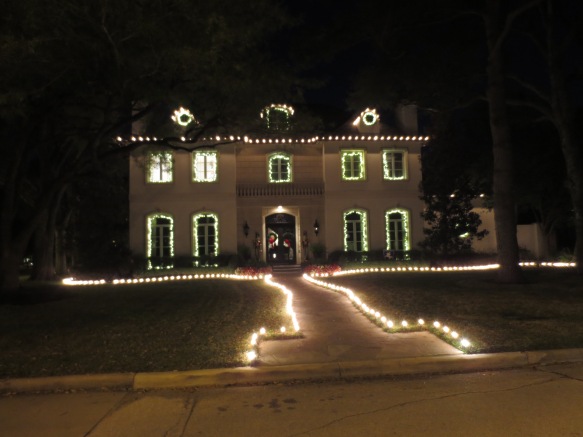 They get a good score for the sidewalk and the front greenery, but again, they should have used house lights to complete the job. 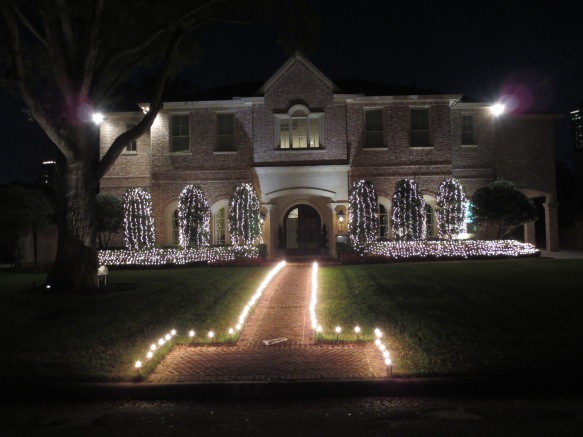 This house used the falling lights technique, but only did it with a few lights.  In River Oaks, they did it with many lights and it looked a lot better.

Here’s another house that would have looked better with roof trim lights and window border lighting.

The houses in Tanglewood all had great potential with their nice fronts, but so many decided not to use house lighting.  They also should have wrapped the two front trees.

I liked the sidewalk of this house, but no tree lights and no house lighting.

The small trees at this house looked nice and they used roof lights, but the windows needed it also. 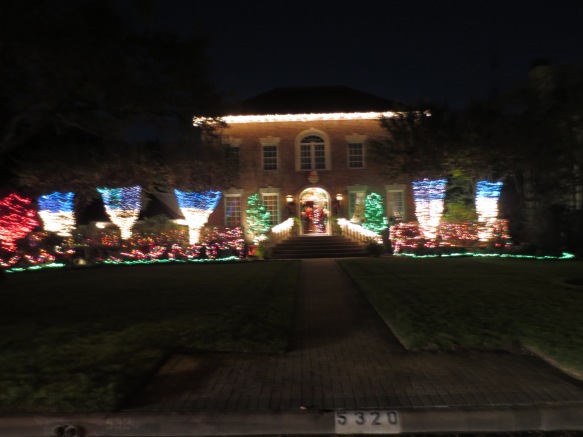 I liked how they decorated the front yard and used roof trim lights and lit wreaths in the windows.  They even wrapped the columns on the second level to the left.  I still think the front entry way is too dark and also underneath the lit columns. 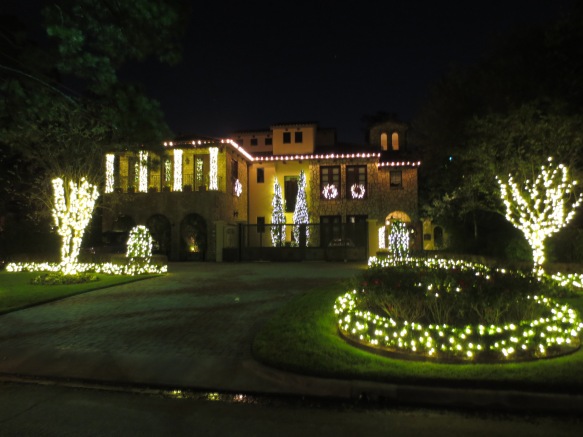 These people always put tractors on their lawn with characters on them, but I had to use my flash because they didn’t have their decorations lit up enough.

Santa drives one tractor and Rudolph drives the other. 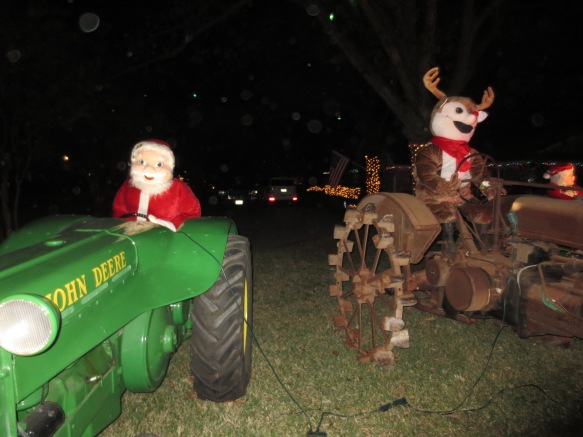 And the Grinch rides up front.

Here’s a house with everything.  The yard has lighting, the sidewalks are outlined and the house has lights. 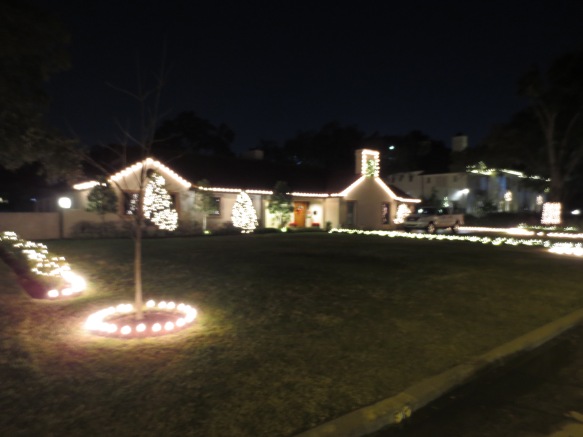 This house had Santa being pulled by a horse. 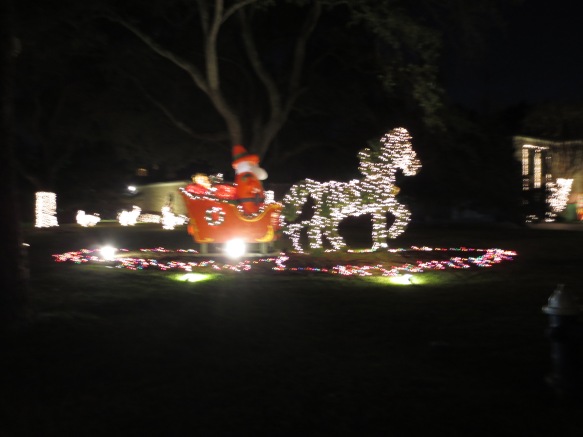 It’s hard to tell in this picture, but this is Santa being pulled by a bull with horns.

Here’s another half assed job. 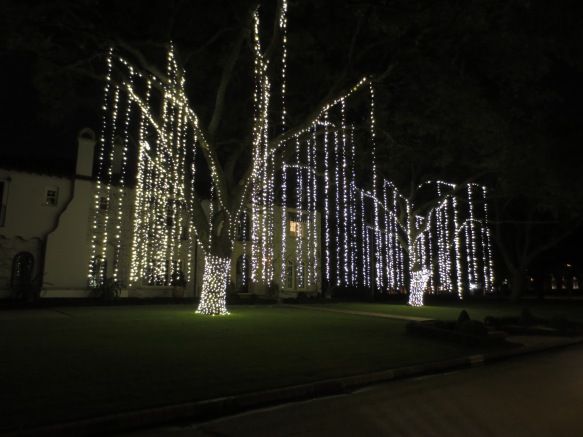 This house had the hedges done and roof top trim lights.  Had they turned off their area lights and trimmed out their windows, it would have looked even better.

I liked how this house had green lights on their lawn.  If they had wrapped the trees, it would have completed the job.

Here’s the view from the front of the house.  Just imagine how nice had they wrapped the two trees well.

This house looked good with the roof trim and the driveway trim. They should have wrapped the trees though. 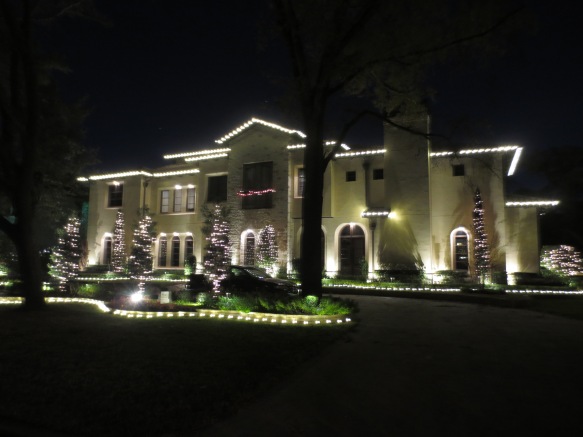 This is one of the nicest that I saw, but they still should have wrapped the tree to the right.

I think this one would have been the best one had they wrapped the two trees in front.  I liked the yard lighting and the lit wreaths in each window.  They even had roof trim lighting. 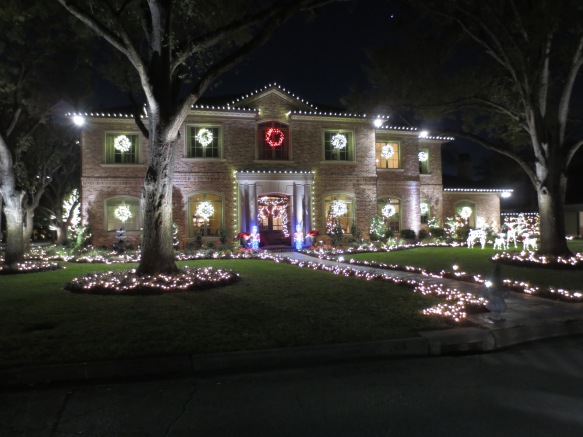 Yet another half assed job.  I saw so many of these that I stopped photographing them. 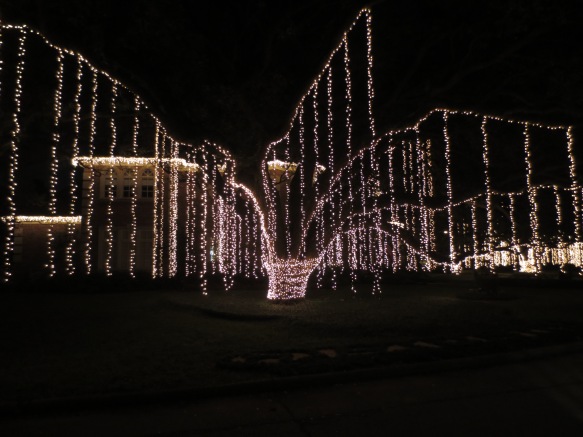 I liked the palms, but they could have accented the yard and used house lights.

Here is a house with nice driveway lighting, but no house lights.

This tree had potential, but the house is so dark you can barely make it out. 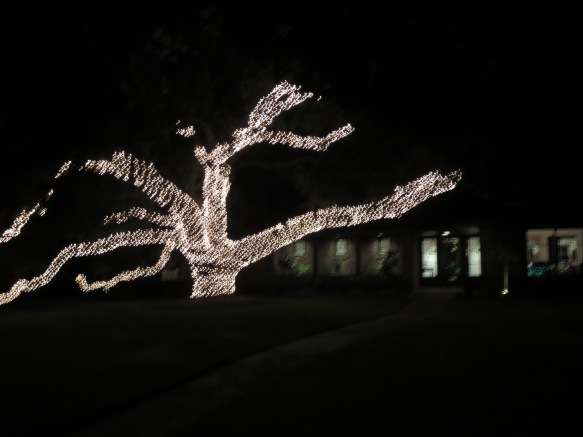 This house had the Three Wise Men on the front lawn.

If this house had wrapped the tree a little higher, it would have looked awesome.  Also, they had a bulb out on the roof lights.

I really liked the yard lighting, but would have liked to see the house outlined with lights.  Also, it looks like they had a power problem because the other side of the sidewalk was out.  If both sides had been lit it would have looked a lot better. 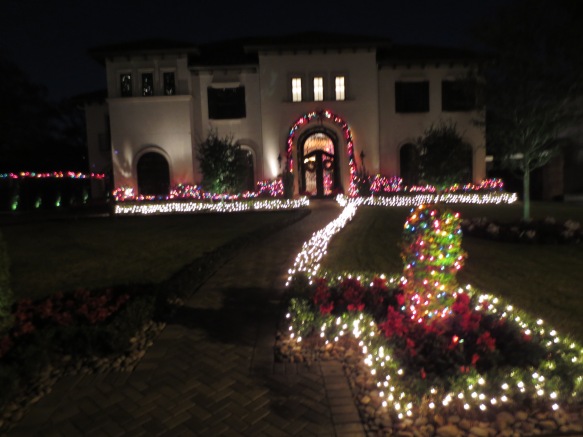 I hoped you have enjoyed my review of the lights of Tanglewood in Houston, TX.

I hope Santa brings you everything you’re asking for.