Dale Jr. is the famous son of a great NASCAR driver, Dale Sr.  In fact, Dale Sr. is tied for the most all time championships at 7.  Richard Petty and Jimmie Johnson also have 7.

Jr. went through the lower series’ in racing and made it into NASCAR, just like his dad still raced.

Dale had one of the best sponsors in racing and his fans loved that he was sponsored by Budweiser, their beer of choice.

Dale learned a great deal from his father. 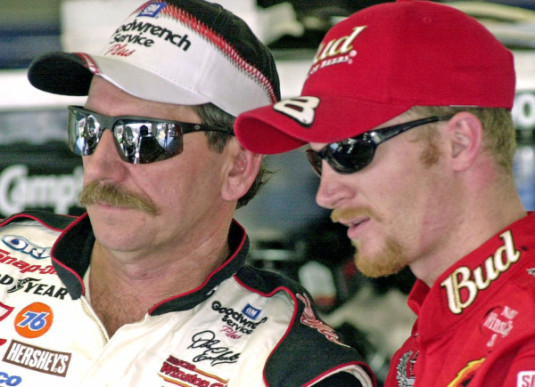 There’s not too many that have felt the rush of racing alongside your father at 200 mph.

Jr. was good friends with all of the drivers because he grew up admiring them.  Here he is with Jeff Gordon, a 4 time champion.

At the time, there was nothing more patriotic.  This was before Budweiser sold out to foreign interests. 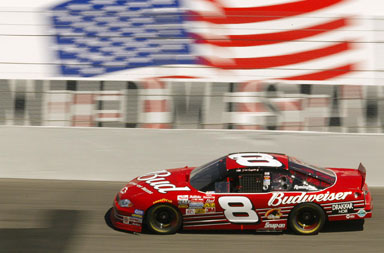 It was hard on Dale after his father died at the great Daytona 500, but Jr. got back into that race car and took care of business. 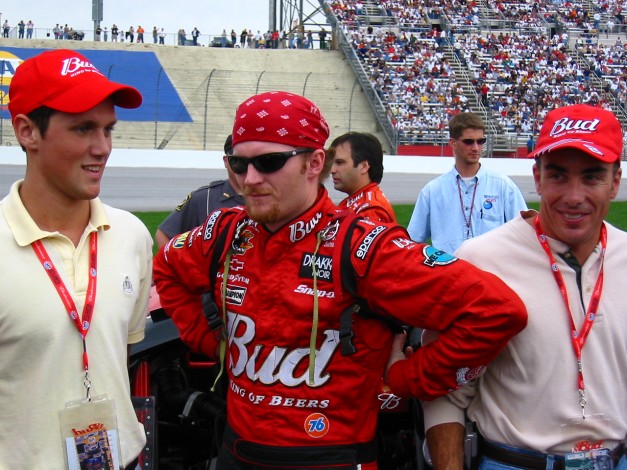 Dale Jr. was voted Most Popular Driver in NASCAR all of the time.  The fans loved him and he inherited his father’s fans after he passed.

Some of the companies I worked with were sponsors on Dale’s car, so I got to work with him occasionally.  He always had a smile and was easy to work with. 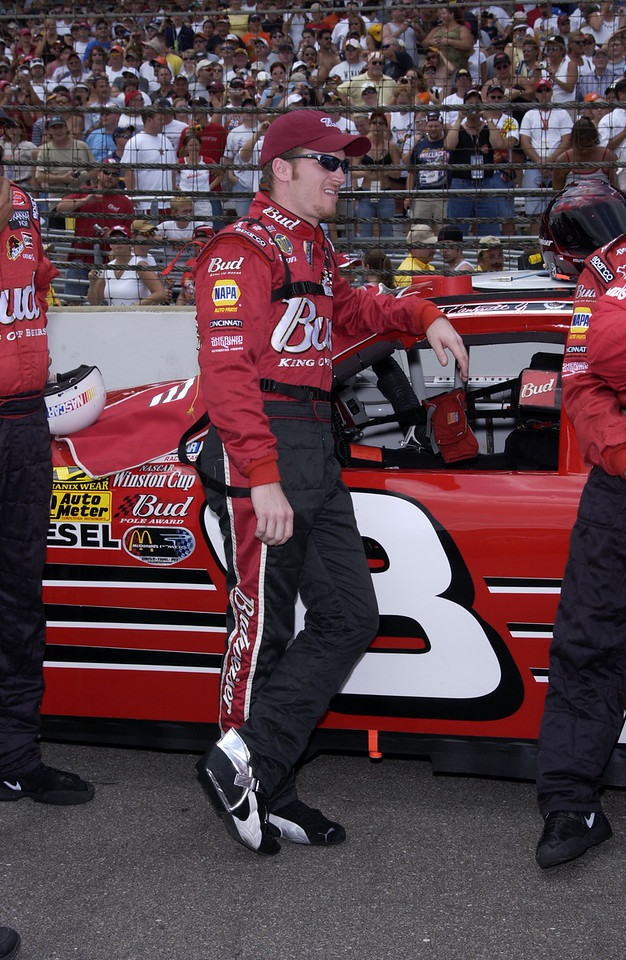 In this photo, Dale is about to ride around the Indianapolis Motor Speedway to greet the fans before the Brickyard 400. 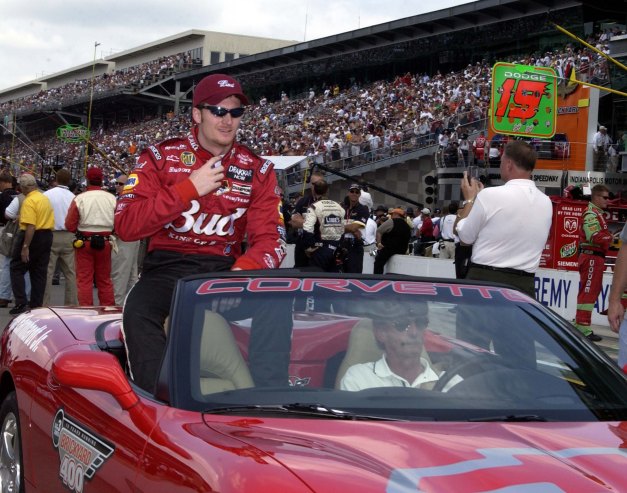 Many fans across this country got to go to a ‘Meet & Greet’ with Jr.  He would sign items for them.

And pose for photos with them.

His fanbase was enormous.  Several fans across the country painted their buses to look like his Budweiser race car.  This was one of the better ones.

In this photo, you can clearly see The Outlaw logo on the rear quarter panel.  That’s the product of the company I was working for.

Here you can see it in front of the tire well. 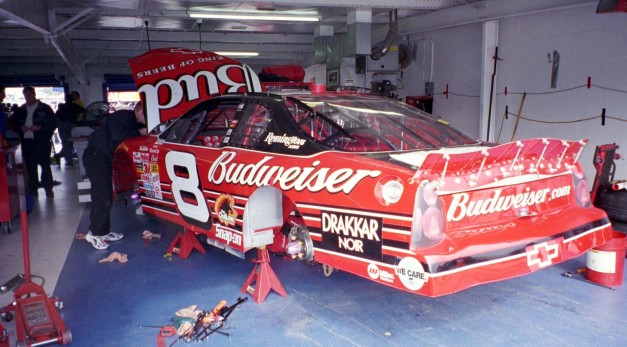 Dale signed a ton of diecast race cars in his day.

Jr. drove for his dad’s company, DEI.  Dale Earnhardt, Inc.  The companies I represented had contracts with DEI, so I was around their teams quite a lot. 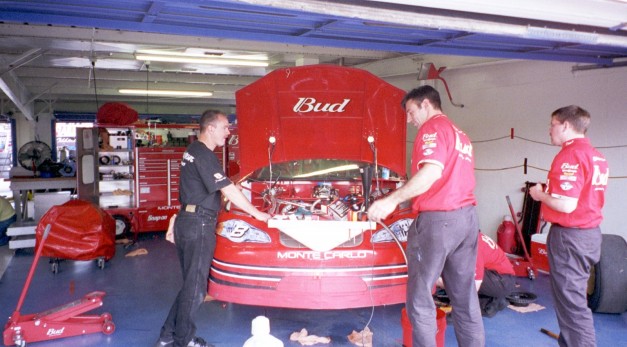 I’ve been to the DEI shop.  It’s so large and clean, they call it the Garage Mahal.

It’s been said that Dale Jr. is worth around $400 million, making him one of the richest athlete’s of all time… not only in NASCAR but all sports.  See, signing all of those diecast cars paid off. 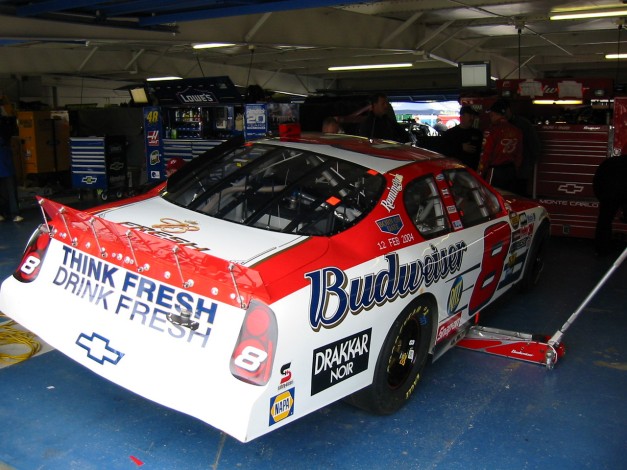 Dale drove for other sponsors after he left DEI, but I’ve chosen to focus on the time when he drove for Budweiser.  It was a sort of Camelot, if you will.

Things were great for Jr. at this time.  He was driving for his dad’s company and racing against him on weekends.

Jr. never won any championships like his father. His best finish was third in 2003. 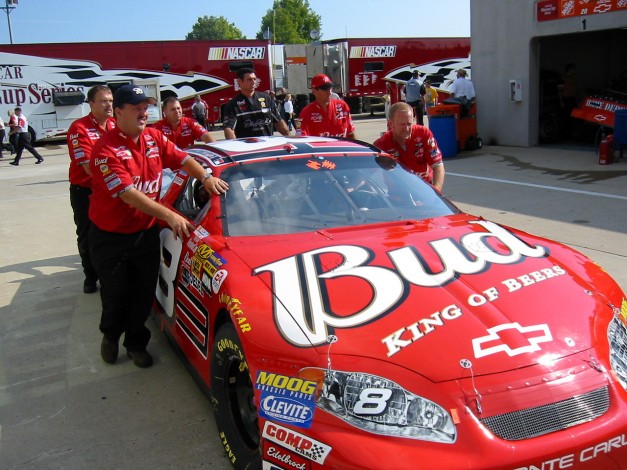 He did win 2 championships in the Xfinity series, which is like the college ranks for NASCAR.

Dale did sign with Rick Hendrick after he left DEI and Budweiser.  The problem? 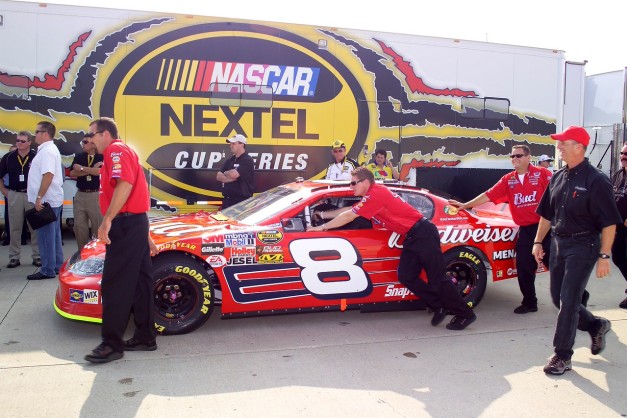 He wouldn’t have the #8 car any longer.  What could this mean?

Dale chose the number 88 at Hendrick Motorsports.  Why do you ask? 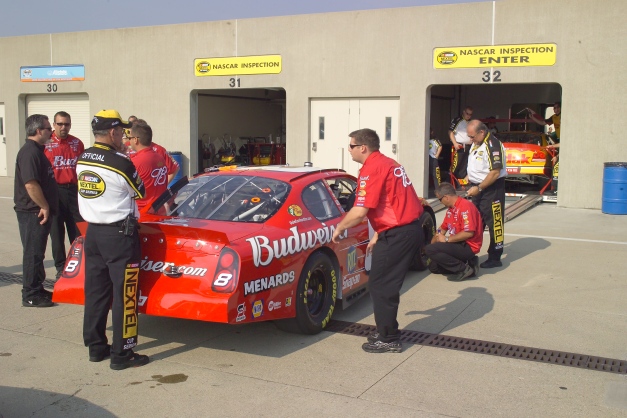 He chose 88 so his fans could easily get their tattoos fixed to represent his new number, just add an 8, lol. 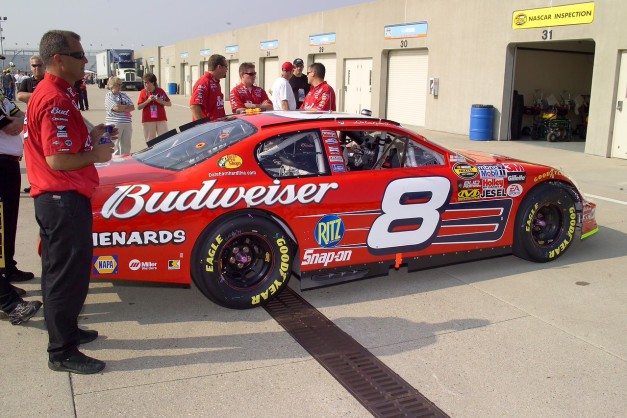 Here the teams are at Indy for the Brickyard 400, waiting to get inspected prior to racing.

Dale’s cars have been photographed tens of thousands of times over the years.  Here are some photos the fans would have loved to be close enough to get.

The generator behind the car keeps the fluids warm and ready to race until the start. 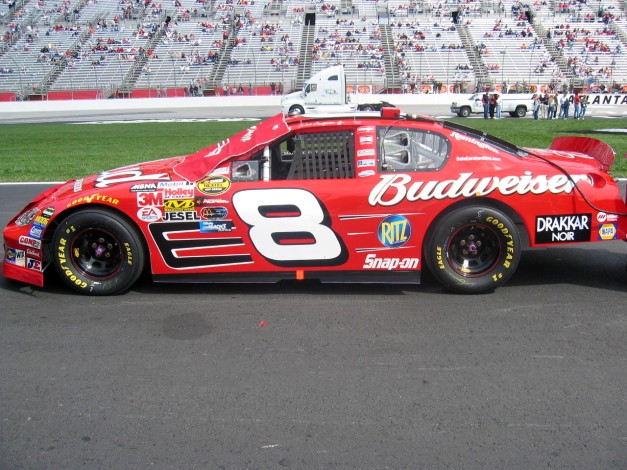 This is at the Brickyard 400 at Indy.

Here they’re about to cover the car for rain.

And here’s a full rain cover in action.  I think it looks pretty cool with that cover on.

Now for a few racing pix.

Dale drove cars with different paint schemes whenever his sponsors came up with a new promotion.

Dale only read a half a book about himself.  It was written by someone else, and he didn’t even read the whole thing.

He says that since he already lived all the experiences, the interest level was just not there for him to continue the book. He still thinks the author did a good job, though.

Dale drove the number 8 car because it was his grandfather’s number, when he raced.

I was at the track the day Dale’s father died.  It was terribly hard for Jr.  He was at the hospital where his father was brought.

They told Dale Jr. the news and then he had to walk out of that hospital in front of all of the media.  He kept a straight face, but inside he was torn up.

Imagine losing your father in that way and then, plus the fact that Dale Sr. was a living legend.

Every driver now wears a HANS device to prevent head and heck injuries.  HANS stands for Head And Neck Support.

Adam Petty was in a race and came into the pits.  While the car was jacked up, the crew chief dove under the car to check something.

The crew lowered the car on him and when it hit the ground, Adam floored it… driving over his crew chief and killing him.

I don’t know that Adam Petty ever recovered from that, but it goes to show that racing is a dangerous sport.

When I started in racing, the Pit Crews didn’t wear head gear.  Now it’s a rule and every guy or gal over the wall has to have head protection.

And I say gal because there are a few women tough enough to go over the wall and work on a car.

I always enjoyed great views at the track.

After winning one race, Jr. rode around with a skull and crossbones pirate flag.  I wish I could find that photo.

This is a shot that explains a lot.. It’s what fans loved about Dale Jr.  He was a legacy, drove a car with their favorite beer and was very patriotic.  This was America for millions of fans around the country. 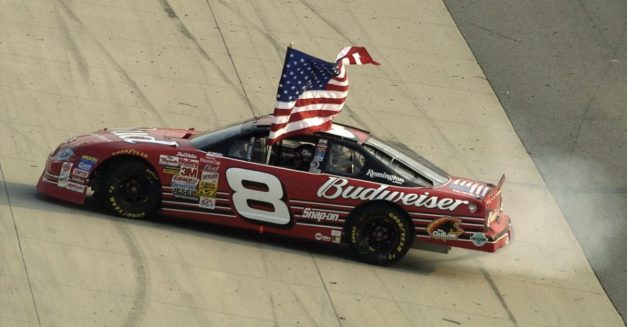 Here’s Dale wearing an Outlaw hat and posing with the trophy from the Talladega Super Speedway.

There’s no replacing the fun times he had as a racer.