I attended the Chevrolet / Corvette Expo one year and it was a really fun day.

There were a lot of fantastic cars on display and also some other activities going on that made it a great day.

I’ll show you some of the better Corvettes in this article and also a special event that went on during the expo.

First up is this beauty of a car.  It’s called Tweety.

Notice the paint job under the hood. 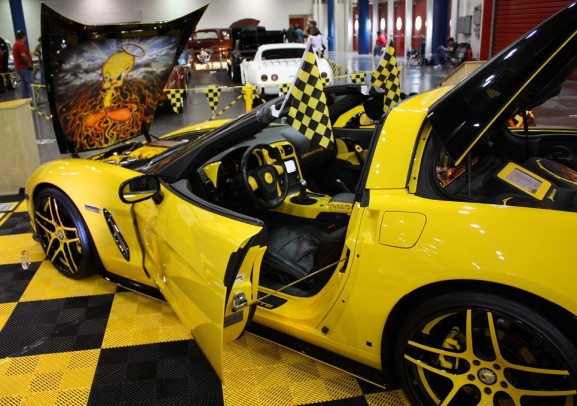 Here’s a better view of it.

Today it seems like a Corvette comes with an endless array of options, but in 1953, the original Corvette was far less complicated.  It had a base price of $3,498, and had just two options for car buyers to add on if they’d like: a heater, which cost $91, and an AM radio, which was $145. 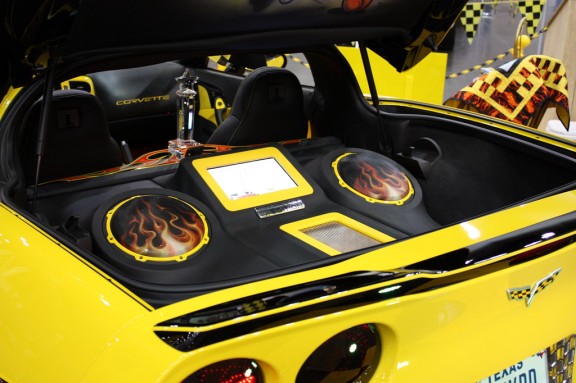 In 1955, Chevrolet made the V8 engine available for the very first time.  In that year, nearly every car buyer went for the V8, with 90% of customers for the year selecting the V8 option.

The people spoke loud and clear to Chevrolet, and the manufacturer decided to offer Corvettes with V8 engines from that point forward.

This engine is beautiful!

The matching helmet is very cool.

The really nice cars go all out for their display area.

At the Chevy / Corvette Expo you could buy lots of things.

Here are some shirts that were offered.

And another booth had shirts as well. 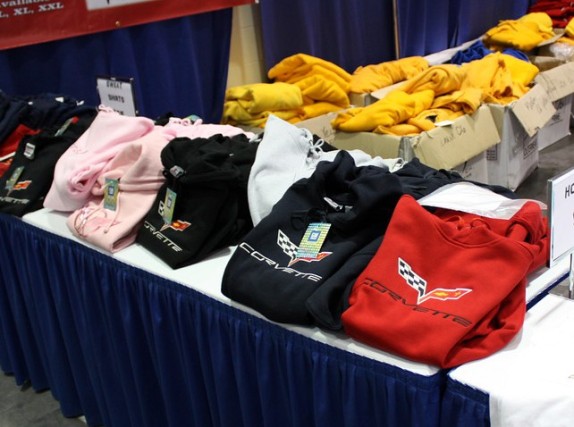 One booth had lots of hats to choose from. 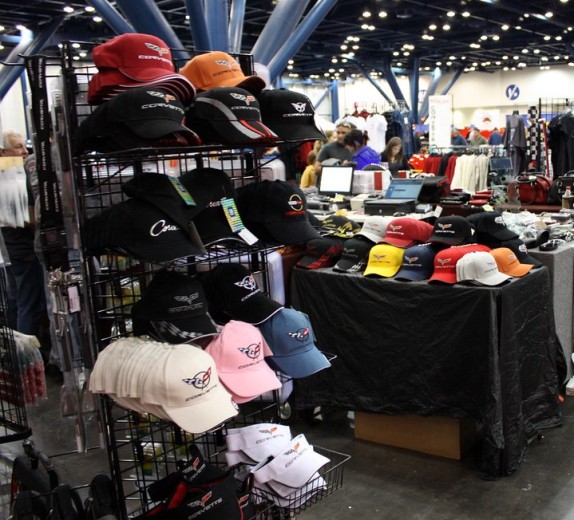 These jackets with Corvette logos were very nice.

You could even buy parts for your car. 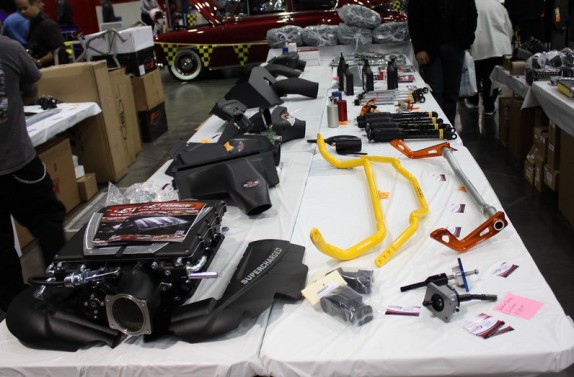 They had jewelry and keychains too.

These are knobs that go on a stick shift for standard operated cars.

Since it was the Chevrolet / Corvette Expo they had other Chevy’s there besides just Vettes.

I had to show you this truck.  The doors opened in a really cool way.

I liked the paint job on it too. 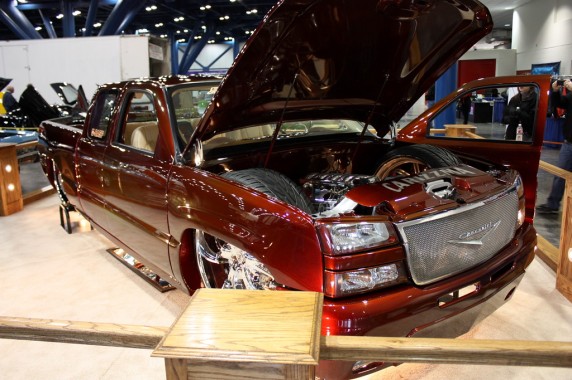 I don’t know the cost of this truck, but I bet it’s expensive.

Here’s a better view of the great interior.

Check out the rims and tires.  Very nice.

The rear axle is exposed in the bed of the truck along with the rear tires. 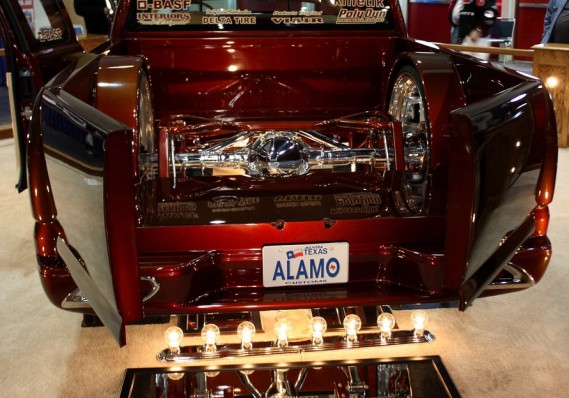 I like how the front tires are exposed when you open the hood.  This was one of the nicer vehicles at the expo.

This red Vette was another beautiful car that was on display.

Since the Corvette went on sale in 1953, the model has sold nearly 2 million vehicles.  In 2012, the Corvette was so popular that it accounted for about one third of all sports car sales in the United States. 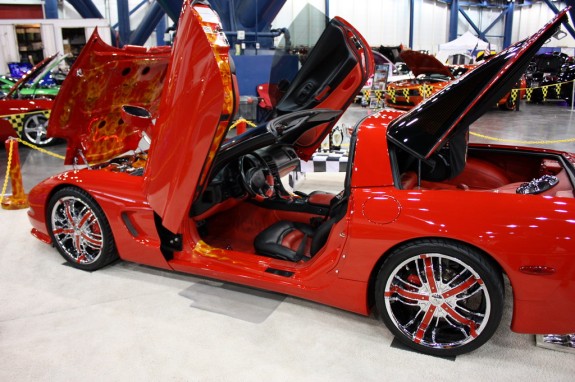 The Chevrolet Corvette was originally code named Opel, but Chevrolet’s chief photographer Myron Scott is credited with coming up with the Corvette name.

He was inspired by the small, fast class of corvette warships.

Chevrolet had planned to use an American flag in its iconic crossed flag emblem for the Corvette, but before the 1953 release, discovered that it was illegal to use it.

According to National Flag Code, it is illegal to use the flag for advertising purposes, and that includes vehicle emblems.

Chevrolet quickly changed gears and decided to use the fleur de lis, a French symbol for peace and purity. 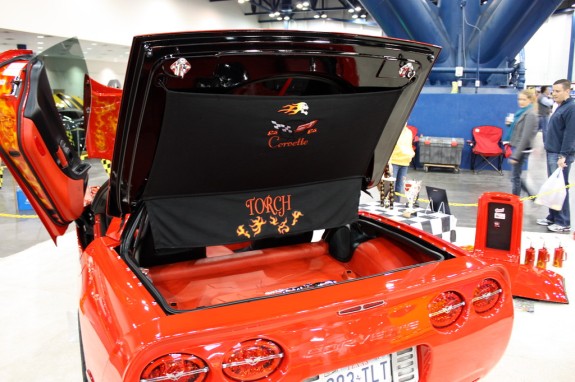 Here’s another car with an unbelievably beautiful engine.

Prince wrote Little Red Corvette after dozing off in a backup singer’s car following an all night recording session.

He says the lyrics came to him in bits and pieces during cat naps, but eventually, he finished the song without sleeping.

It was Prince’s first big hit.  Chevrolet capitalized on the popularity of the song in 2001, when they put up billboards with a red 1963 Chevrolet Corvette Stingray that simply said, “They don’t write songs about Volvos.” 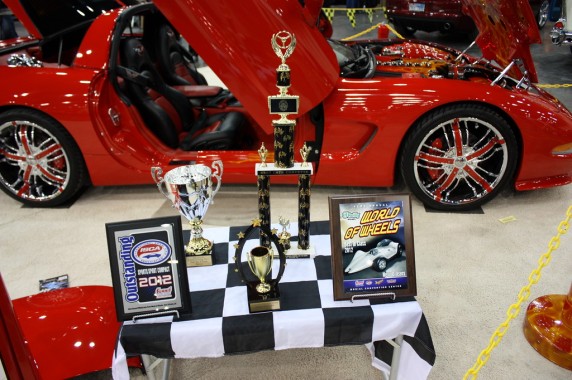 I liked this older model Vette.  The yellow looks good on it.

Here’s a black Vette.  If I owned one it’d probably be black. 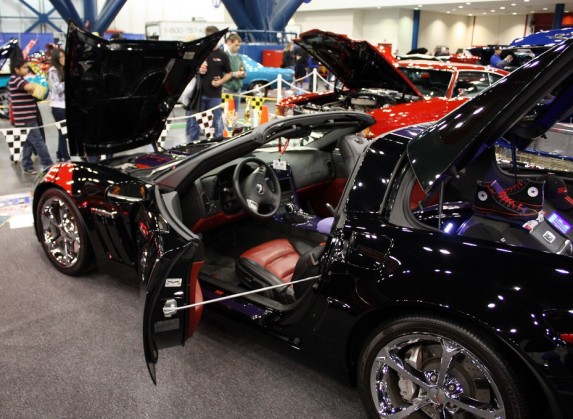 There were several red Vettes on display.

Since 1999, Corvette Racing has won 92 races worldwide, with 85 in North America and 7 internationally.

The Corvette Z06, offered for a number of model years starting in 1963, was created to give private racers an option for competition when GM couldn’t establish a factory race team. 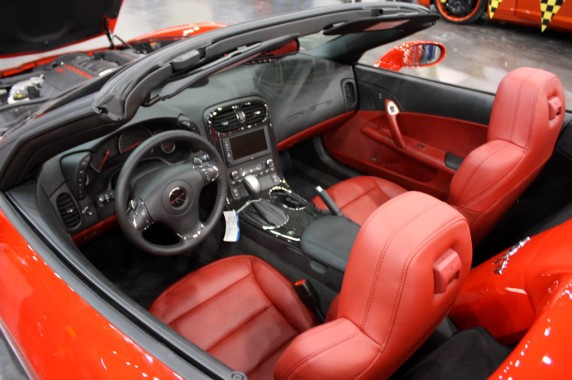 The top speed in reverse for the 2014 Chevy Corvette Stingray is an incredible 53 miles per hour. 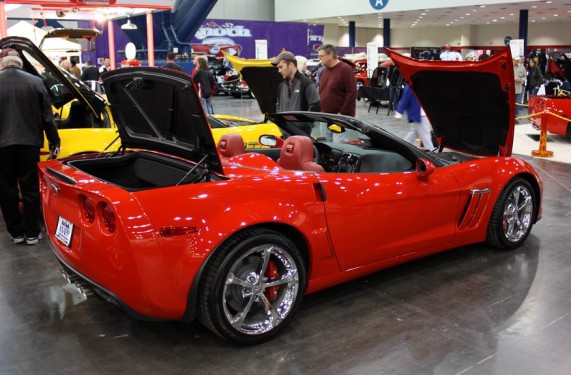 This light blue is a pretty sweet color on this vette.

Crossed flag emblems returned to the nose and sides of the Corvette in 1979 after many years of being absent.

1974 was the last year the Corvette would be produced to run on “leaded” gasoline. 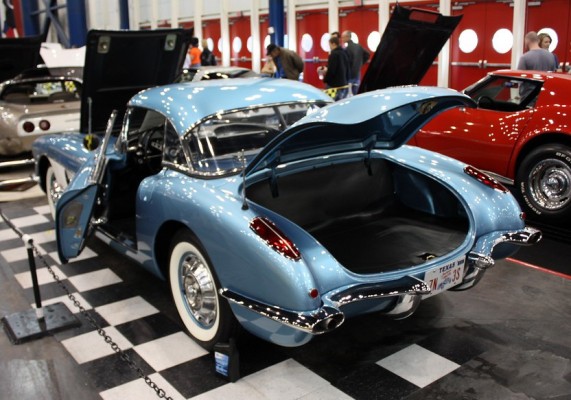 The Jaguar XK120 is believed to have been the inspiration for the first Corvette.

Only 43 1983 model Corvettes were built.  There were so many quality problems with them it was decided to halt production until they could be corrected.

By the time the problems were corrected, it was too late and already 1984.

The only 1983 Corvette still known to exist is on display in the National Corvette Museum.

The 1963 Stingray model had a split windshield that, while gaining significant cult popularity, has not been repeated in any subsequent Corvette model. 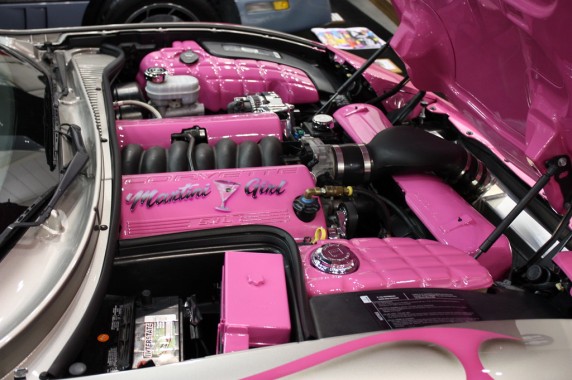 The first of several Corvettes to feature at the Great American Race, the 1978 C3 model was outfitted with a special black and silver paint job for its role as the pace car for the Indy 500.

I snapped a photo of this interior of an older Vette.

The 1979 model sold 58,307 units, which to this day remains the record for Corvette model year sales.

Though the Corvette has historically been designed to be the perfect convertible car, a tradition that continued with this model, the C5 was not sold with a removable roof until 1998.

The Chevrolet Corvette is the longest-running, continually produced sports car in the world.

Since the first model in 1953, every Corvette model has used innovative materials, from fiberglass in 1953 to advanced carbon-nano technology and carbon fiber on the 2014 Corvette Stingray. 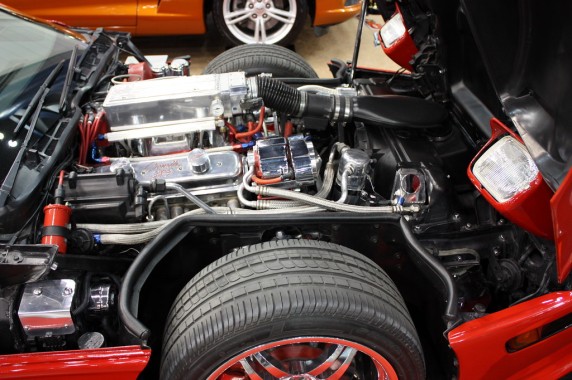 This Vette was put up on pedestals and I thought it made it look better.  I also love this model and the paint job on it. 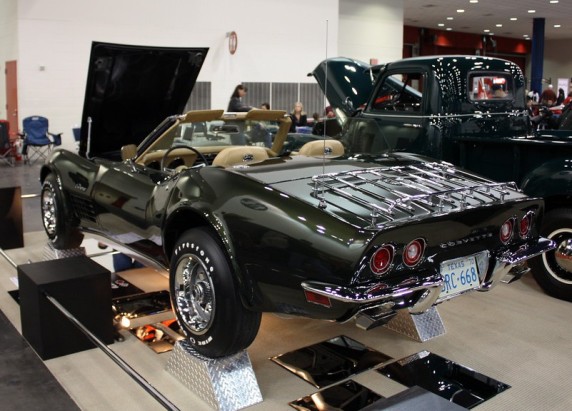 Here’s two good looking Vettes that were parked next to each other. 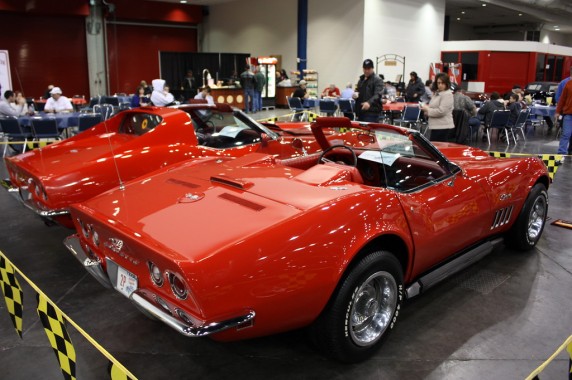 Now for the special event that went on.

There were bikini models at the expo for a bikini contest, so someone got them to pose by the cars.

She looked nice lying on this Vette.

Can you guess which one I liked best?

I’ll let you figure it out as the photos go on. 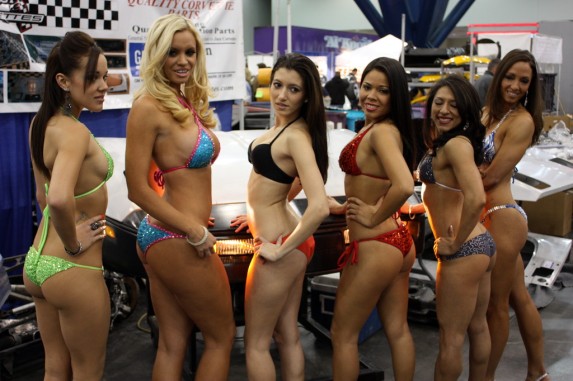 I bet you have an idea by now. 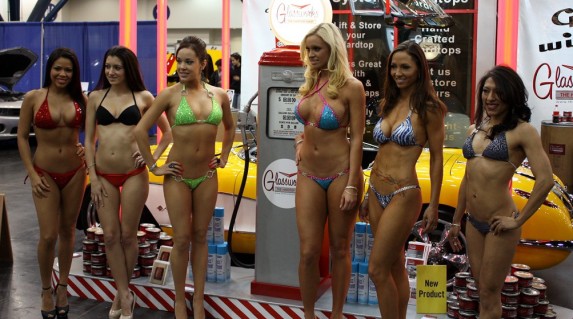 And now I know you know, lol.

There were ten girls in the competition.

I thought this girl should have won.  She is really attractive. 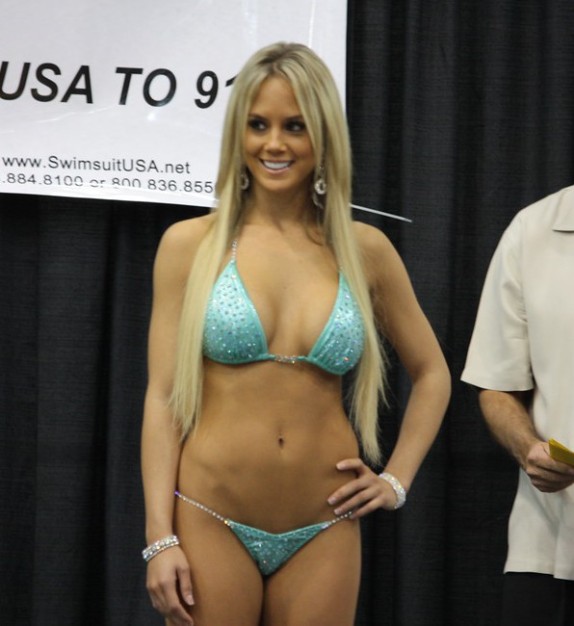 Or maybe she should have won also.

I liked her bikini a lot.  Very sexy. 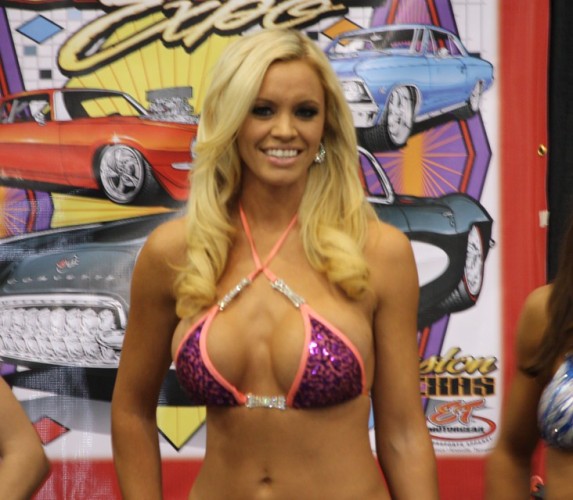 I think any of the other three should have beat her.  No offense meant to her, but they were just better looking than her. 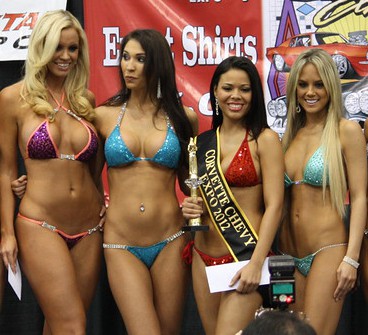 I hope you enjoyed my article covering the Chevrolet / Corvette Expo and Bikini Contest.

I have more than 25,000 travel photos on my website, as well as my videos, for your viewing pleasure.