The Natl. Hot Rod Assoc. (NHRA) is not nearly as big as NASCAR but they’re a close second.  In this post, we’ll look at some marketing that goes on in the NHRA.

The tents are usually erected between the haulers. 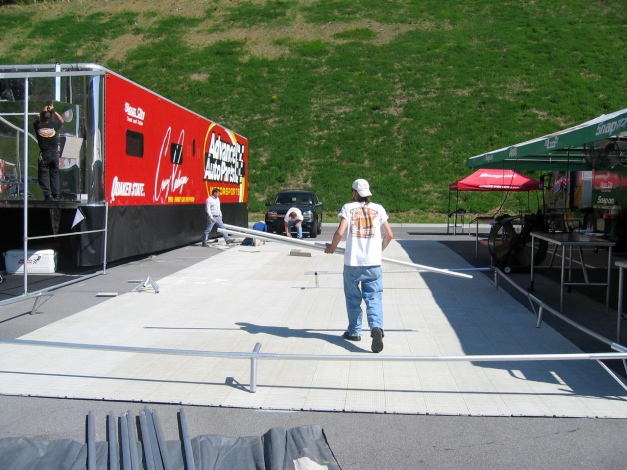 This allows the fans an up close and personal view of the teams working on the cars.

They always seem to measure it out perfectly.

Now to begin the final touches. 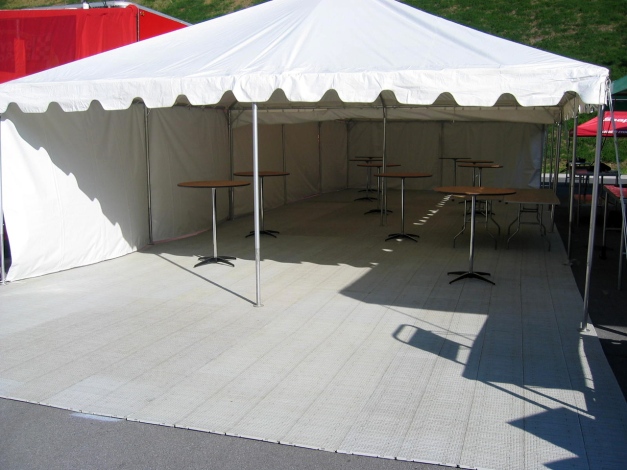 And now, with the inflatable, it’s finished. 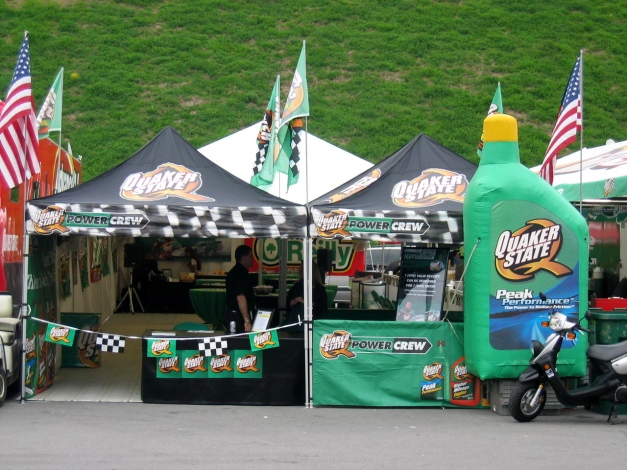 It makes for a great environment to entertain your guests. 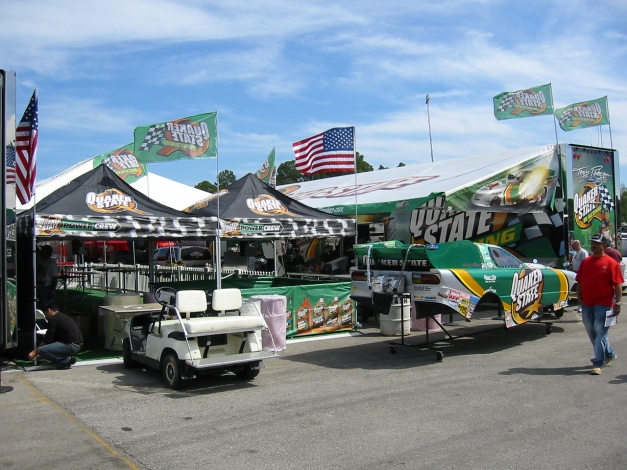 Here’s a few shots of the inside.

It’s amazing what some green and black material can do. 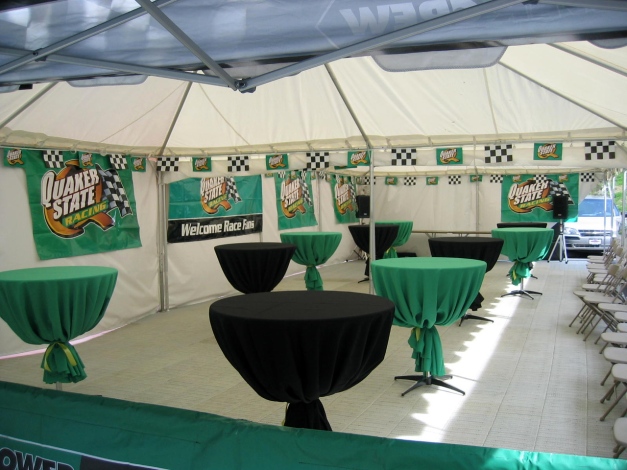 Plenty of tables and chairs to watch the action.

There’s a banner wrapped around the square trash box. 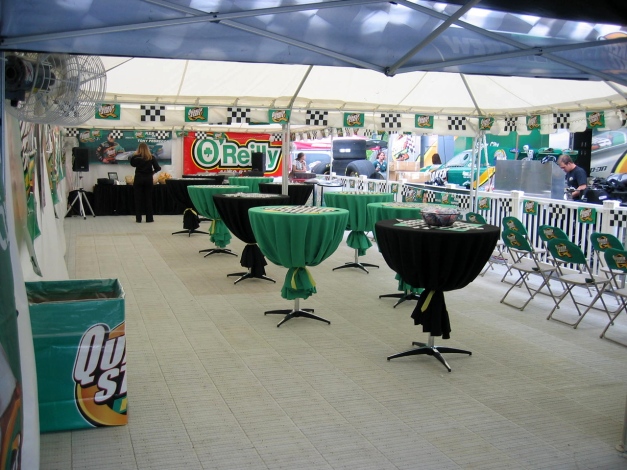 Come race weekend, the guests are all very happy to be in the shade enjoying their day.

Sometimes, they served themselves.

And sometimes, the staff served them.

The fans loved the closeness to the driver.

Fans lined up for a chance to meet a driver and get an autograph from him. 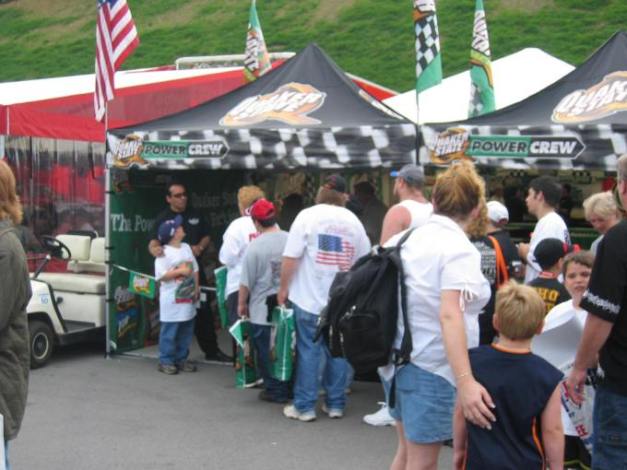 We also handed out bags for the fans to carry their Swag in.

Our bags were better than other companies, so we never had a problem flooding the race scene with Quaker State bags.

Everybody loved our bags.

And they could be seen all over the track all day long.

In the Sport Compact series, we had a display stand made to hold the bags. 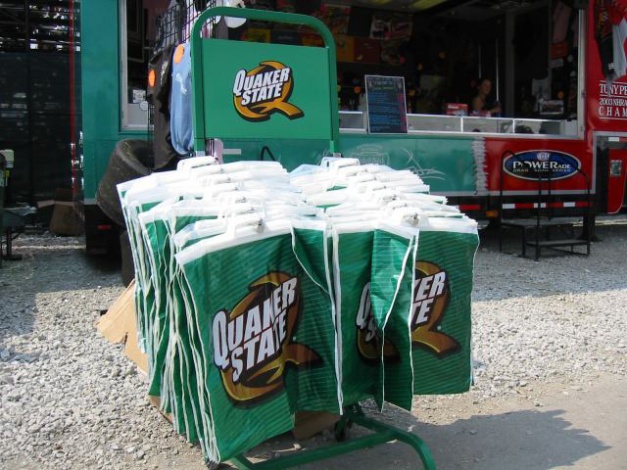 Now let’s switch gears, as one in racing might say.  Another part of hospitality marketing is putting up banners around the track and surrounding area.

This is a pre-school and they always let me put banners on their fences because they said the kids loved it.

I was the only Banner Boy to ever put banners on the train bridge.

I always asked the companies on the way to the track if I could put banners up.  If you don’t ask, they’ll just come cut them down and you will have wasted your time and supplies.

Here’s my crew, utilizing a wooden fence by the track.

This is right in front of the track entrance.

Everybody coming and going will see these banners.

Here are some pix around the tracks.

This is actually a good placement to deter banner thieves.  But a pro could steal this banner from the other side with ease.

The food court is always a good place to banner, considering everybody goes there.

Now let’s take a look at the entrance to the suites. 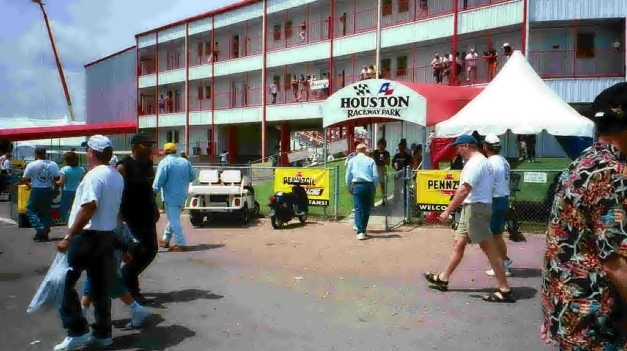 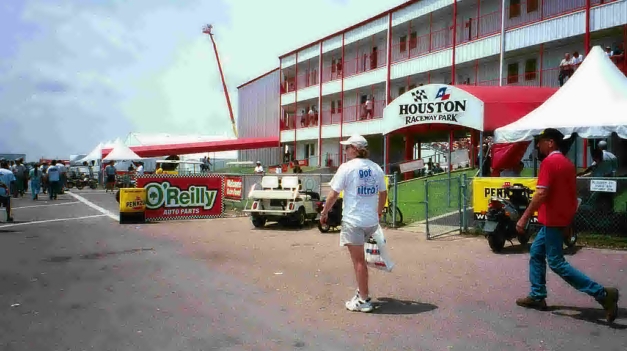 Now, a few years later, with a different sponsor, they neglected to logo the awning and don’t use barrel covers.

Race fans love to take banners that say that.

Here we see banners and inflatables.

Bannering is an important job and shouldn’t be taken lightly.

Companies depend on you to get the word out about their products.

And you can see how many different companies have Banner Boys.

I enjoyed being a Banner Boy.  It was lots of fun and practical jokes.

Now for a couple of inflatable pix.

This one is near the suites entrance. 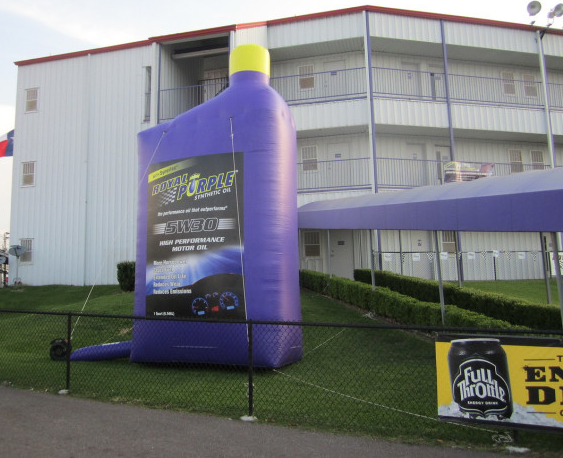 Here’s a good pic of some inflatables lined up and ready for TV time.

Hospitality marketing doesn’t have anything to do with the signage on the suites, but it’s still a very important part of the overall marketing program.

I’ve hung banners all across America. 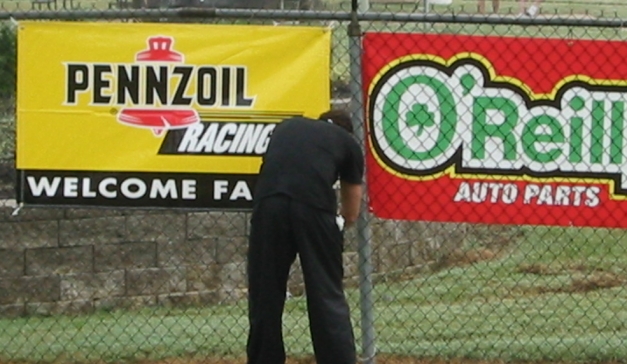 I was able to travel quite a lot while being a Banner Boy.

Here, Johnny and I are decorating a restaurant for a party.

At a drag race, there’s always a Primary Sponsor.  They get dibs on the best spot for a tent. 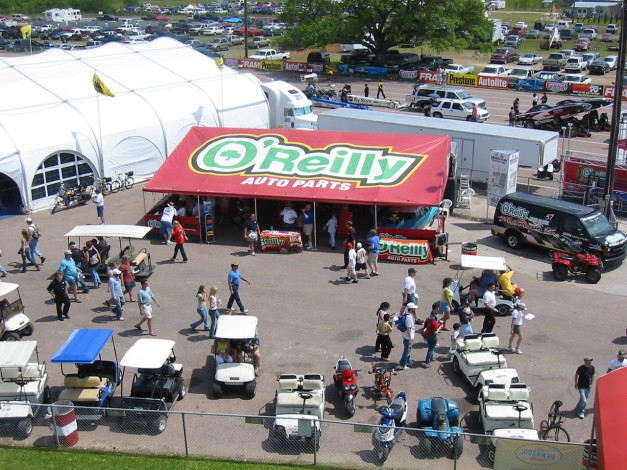 And most often they have interactive things to engage the fans.

I’ve had to organize many a line for driver autographs. 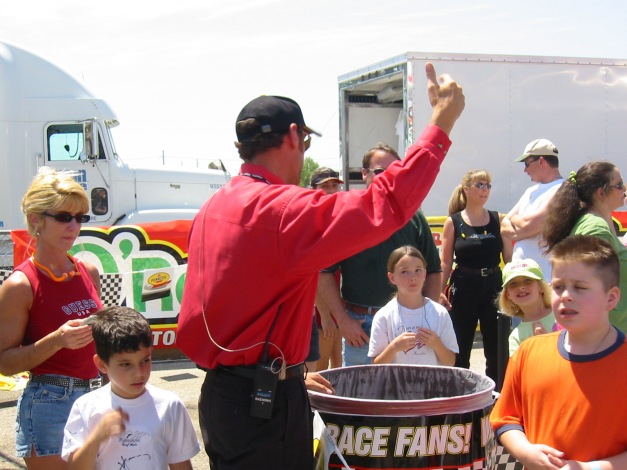 Here my sister stands by Tony Pedregon as he signs for the fans. 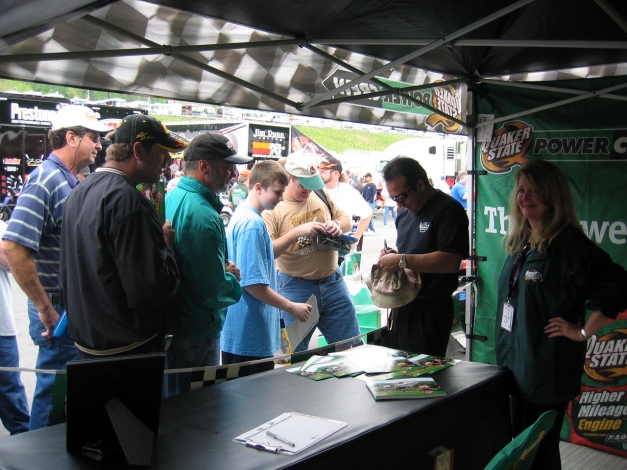 This little kid had saved coke cans to buy a go kart, then it was stolen from him. 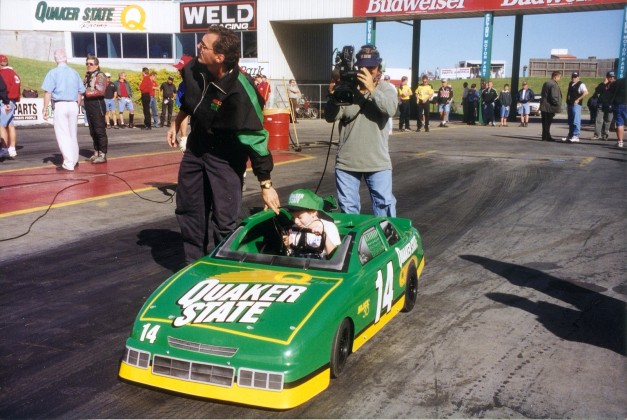 Quaker State heard about it and invited him and his family out to the drag strip and gave him a new go kart.  I remember driving around Topeka, KS in our big truck to pick it up.

That kid had the best day ever.  We let him drive down the road in front of all of the fans cheering for him.

Now for some big boys marketing.

These teams travel with this hospitality tent set up week to week through the whole season.

They have some of the nicest supplies money can buy. 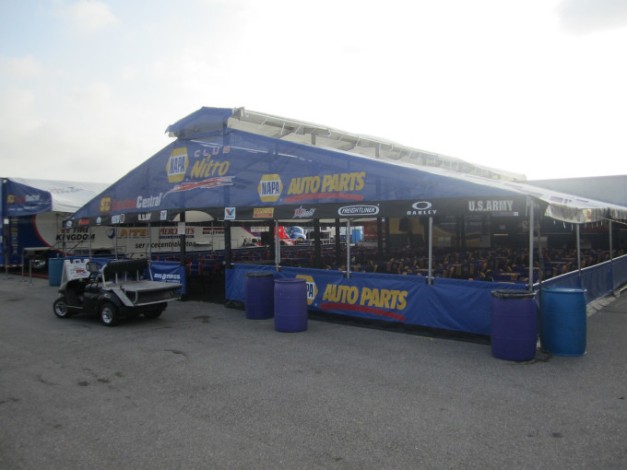 It makes going to the races a whole lot of fun. 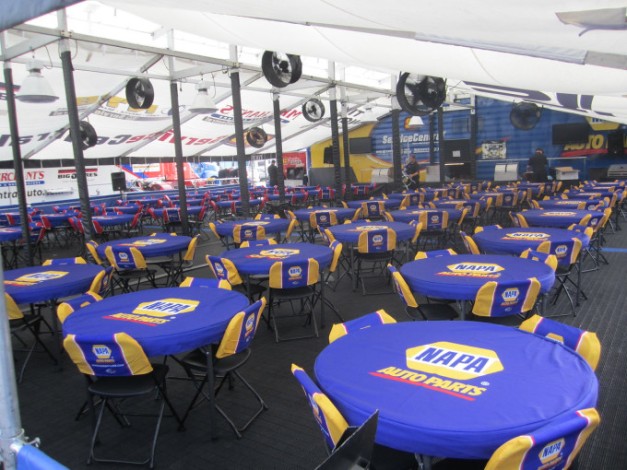 Now for some lower budget set ups.  Here’s the entrance to the hospitality area.

Not much by way of decorations.

And here’s a look at the inside.  Pretty no frills atmosphere.

Now here’s something I can appreciate.  Lots of companies use models in the NHRA.

And I don’t know anybody that doesn’t like that.

I worked with a model or two in my time. 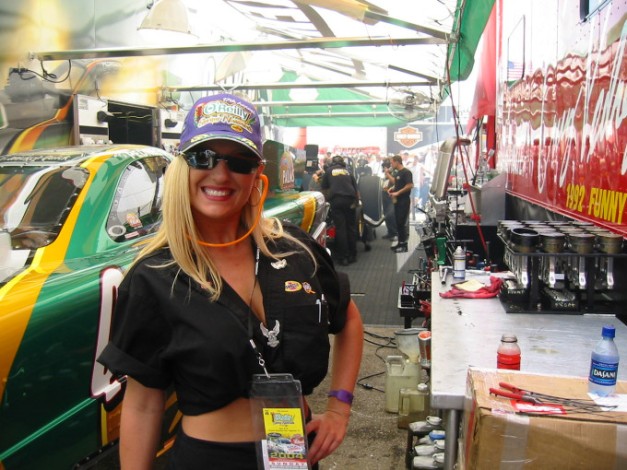 Fe and I worked a lot of races together.

I represented Pennzoil and Quaker State., as well as other companies. 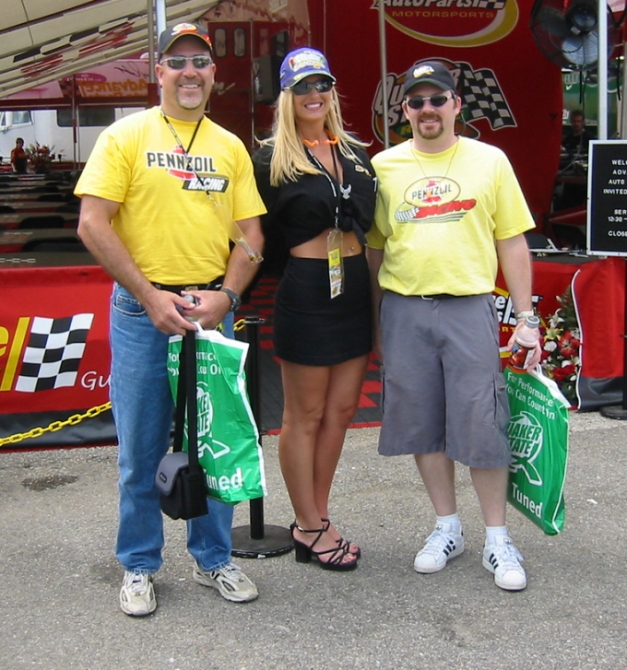 I hope you’ve enjoyed this look at NHRA Hospitality Marketing.

That completes this NHRA 101 Course.  Give yourself 3 Credits towards Graduation.  Congratulations on your Quest for a Degree from The Universite de Arachnida.