Recently, Voodoo Doughnuts opened a shop in Houston.  I knew right away that I wanted to go.  I went to their website and looked at what choices they had.  After making my decision. I headed out.

I think they started out in the Northwest of the U.S., like Portland or Seattle, not sure.  Anyway, I knew it was a cool business when I arrived and saw this mural on their fence.

Here is a pic of their shop.  The pink sure stands out and is noticeable when passing by.  My friend, who lives near Voodoo, said that there’s always a long line to get doughnuts. 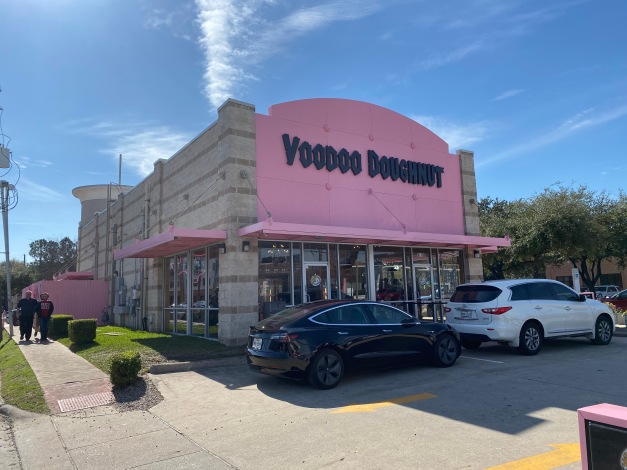 There were people in front of me when I arrived.  The inside is decorated nicely.  They have menus with colorful pictures for you to look at before you get to the counter.  This is supposed to speed up the line, but everybody wants to look in the case when they get up front.

The doughnuts are more expensive than Shipley’s or your local doughnut shop, but you’re paying for creative, hard to get, doughnuts.

Now you see why everybody wants to stare at the doughnuts.

A diabetic would die if they ate a lot of these sugar filled, kill cakes.  Notice the big, chocolate covered doughnut with the white icing writing on it.  It’s called the “Cock & Balls” because of it’s shape and cream filling, lol.

The doughnut to look at in this pic is the “Oh Captain, My Captain”.  It’s covered in icing, then Captain Crunch cereal.

The first time I went to Voodoo Doughnuts, they were out of the one I wanted, so I had to go back later for “The Cock & Balls”, lol.  I wish I had put something in the box next to it for scale so you could see how big that thing was. 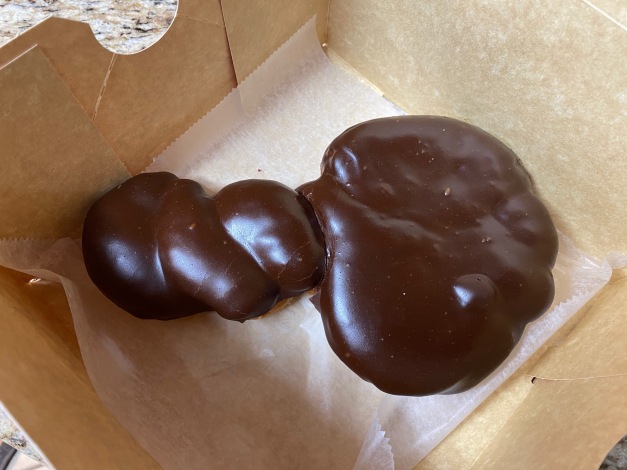 I ate about half of it and had to go lay down, lol.  Talk about a Sugar High.  I ended up throwing some away.  That’s just too much sugar for one person to eat.

If you like doughnuts, I hope you can one day visit Voodoo Doughnuts somewhere.  I think you’ll like the experience.  And like some of your mothers told you, “Stay away from the cock and balls.” lmao.

Be safe and have a chill day.