At the Sturgis Motorcycle Rally you see many sights worthy of taking a photo.  In this Blog Gallery, I’ll show you the sights that I thought were cool enough to get a snap.

For a small fee, you can climb a platform at either end of the main street in Sturgis for photos and/or video of all the action going on in town. 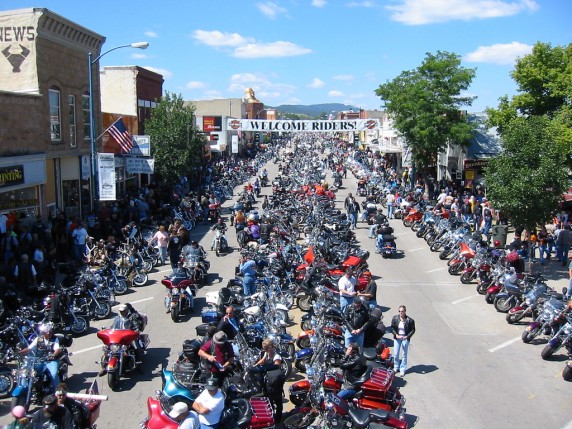 This photo is from the second platform on the other side of town, opposite the first picture.

All along the side of the street, there are shops for food or merchandise or a bar.

I had a beer every now and then but mostly I worked the entire time I was there.  I did enjoy the food.

There were many stores selling riding leathers like chaps, jackets and vests. 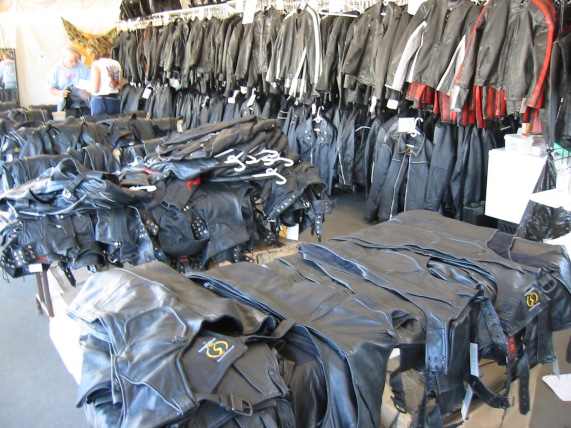 I already had my gear or I would have definitely picked something up while I was there. 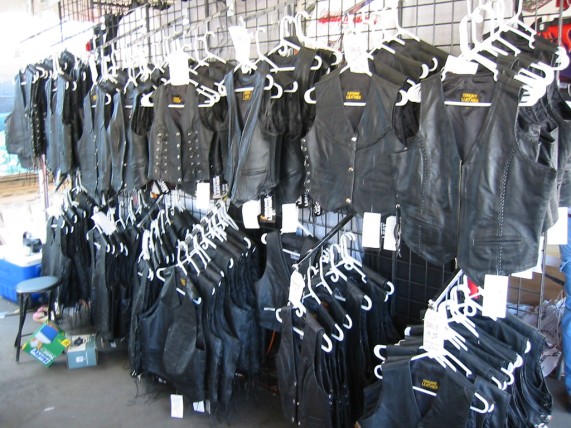 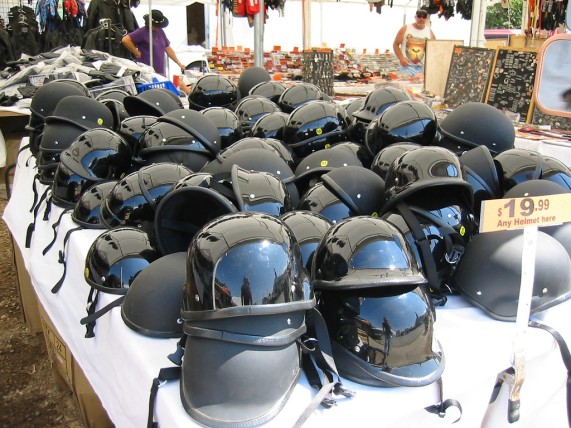 I like these types of helmets but most of them are not DOT approved.  DOT stands for Department of Transportation.

The reason that most of these helmets are not DOT approved is that they are just not sturdy enough to provide good protection in the event of a crash.

I always enjoyed looking through all of the shops and stands to see what was for sale.

I bought a Sturgis ring.  It looked like a college graduation ring.  The only difference is that is was made of hard plastic.  It was gold in color and hard to tell it wasn’t real gold.  Years later I lost it… too bad.  I would have liked to have held on to it for memories.

A lot of these companies that sell merchandise will make the circuit around the country, going to all of the biker rallies throughout the year.  That’s why you see so much merchandise; especially all of the leather.

You’ll see many little stands with pins, patches or stickers for your bike, helmet or jacket. 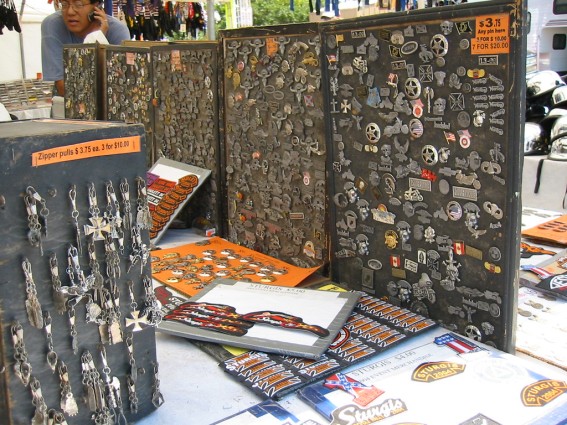 Below is a picture of a lot of stickers that you can choose from.  I think I bought some. 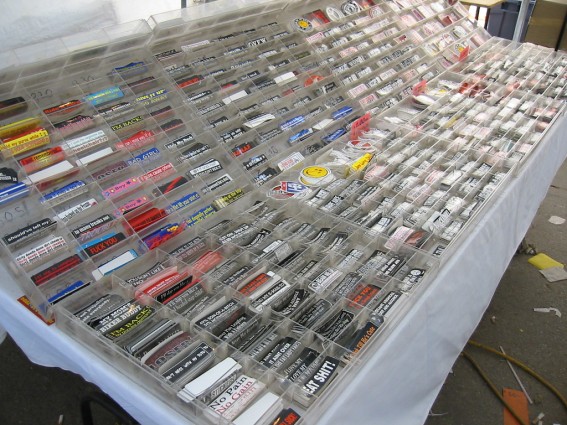 Here’s a bunch of patches for your leather vest or jacket.

As soon as you decide what you want, there’s people that will sew it on for you while you wait.  Talk about fast service!

I wish I had taken more photos of the food.  I enjoy event food although I’ll probably get a heart attack from it.

These next photos are neat.

Around town, you’ll see maps.  Everyone takes a pin and puts it in where they are from.

Later in the week, the maps are covered in pins from points all over because people travel from everywhere to get to Sturgis for the rally.

This is a smaller map of the U.S.  As you can see, people come from all of the U.S. as well as the rest of the world.

Here’s that same map but I included Europe this time.  You can see how many pins there are from all over Europe.

Here’s a better view of Europe and the pins of people from there.

I noticed a lot of stuffed animals on the backs of motorcycles.

It’s cool and all, until it rains on it and it gets soaked through and through.

I also saw a lot of pets at the rally.

I liked that this dog has his own riding googles and sidecar.

These two little dogs were patiently waiting for their owner.

I thought this was a cool picture of the little dog wearing his own leather jacket with the Harley Davidson logo on it. 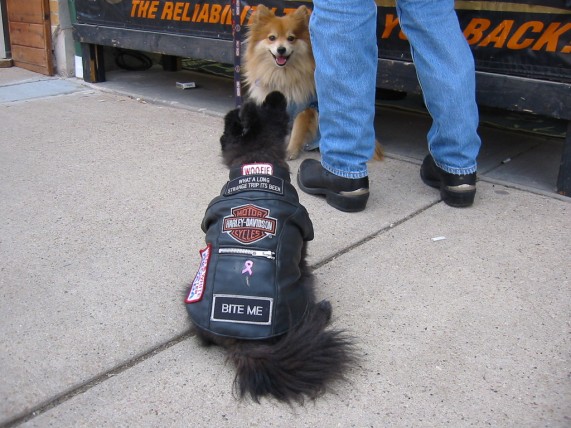 This huge truck was called the Raminator.

They had another one like it at the Buffalo Chip Campground.  They were giving rides around the campground in it, so I took one. 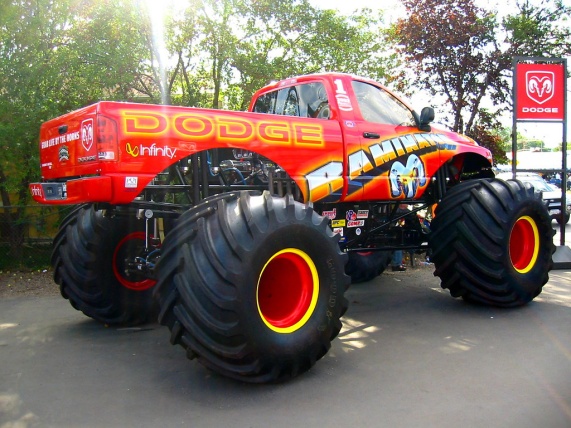 I didn’t notice too many cars, but when I did they were cool.

I think this car would have looked better bright red, rather than baby blue.

You’ll see people riding all kinds of things during the rally.

I don’t know how people can ride such a small bike.

Check out how small his tires are. 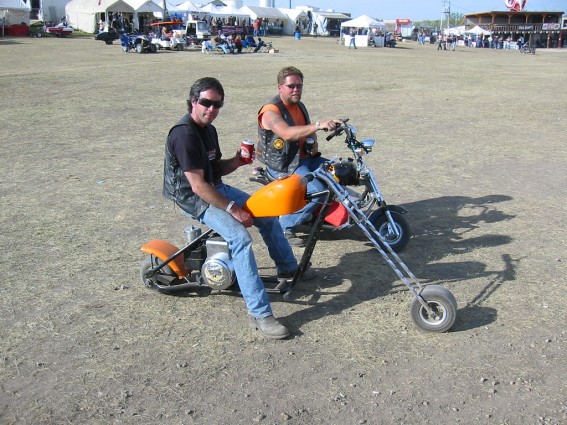 This guy was pulling his wife behind him in a wagon.  Not the coolest way to get around Sturgis.

I thought the art in the photo below was very cool indeed. 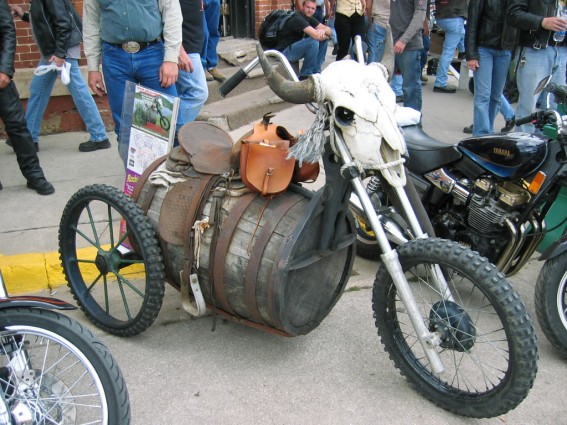 I have seen many guys carrying crosses at special event over the years.  They do it to bring awareness to Jesus.

I think there’s a time and a place for everything, but to each his own, I guess.

This guy was advertising for a tattoo shop. Notice the penis painted on his left leg. 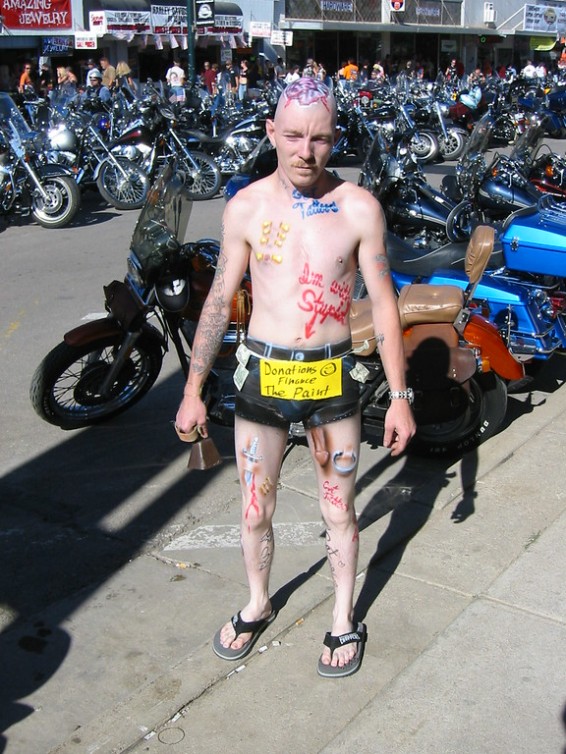 He was quite the strange little fellow.

I met Willie Nelson while I was in Sturgis.

No I didn’t.  The guy in the photo above is a Willie Nelson impersonator.  He calls himself “Almost Willie”.

The guy in the photo below is a stunt rider.  There’s a spinning drum underneath the rear tire of that motorcycle and he is really riding it while standing on only one leg and backwards. 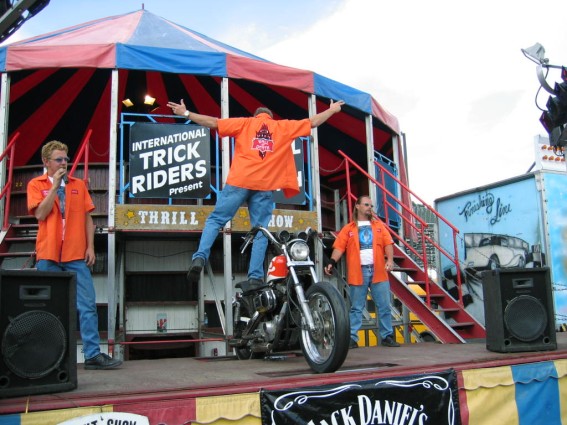 They would ride a go cart and small motorcycles around the inside of this large barrel.  People would hold out money and they would ride by and grab it from your hands.  It was a pretty cool show.  I’ve got a video of it on my website if you wanna see it. 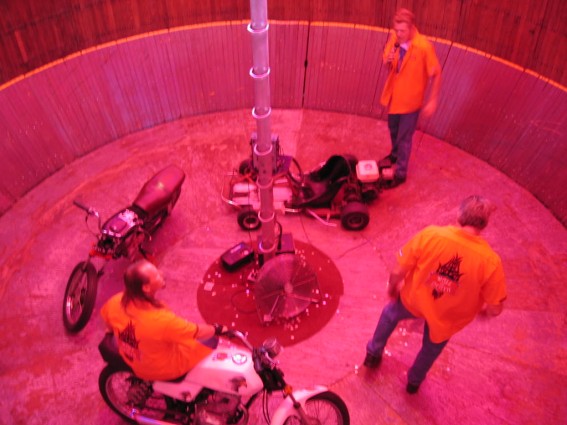 Every day at noon and five, everyone would gather in the middle of the street for a massive photograph.  About two hours later, you could go buy the photograph you were in.

I bought one that I was in but it’s hard to find myself because there were so many people in the photo.

At the Buffalo Chip Campground, you could buy inflatable dolls, big inflatable penises or other novelty items for a good time.

The Buffalo Chip Campground is a huge campground that also has a concert area.  I saw ZZ Top one night while I was in town for the rally.

Here you see people starting to accumulate for the night’s concert.

I got some good photo’s of Kid Rock one day when he came out to rehearse before his show that night.

Here’s a photo I took of ZZ Top while they were playing the night I saw them.

At the Buffalo Chip Campground, a guy works all week on a sculpture. 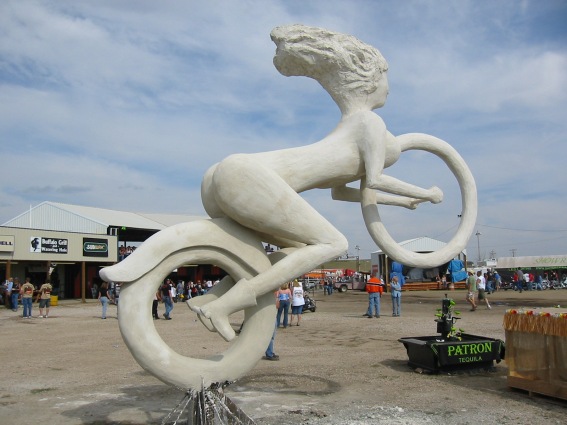 He finishes up towards the end of the week.

Now here is one unique way to get around the Buffalo Chip Campground.

I’d hate to flip over in that thing.

Check out this dude.

You think he’s over-compensating for something? lol.

I had to get a photo with the painted little guy. 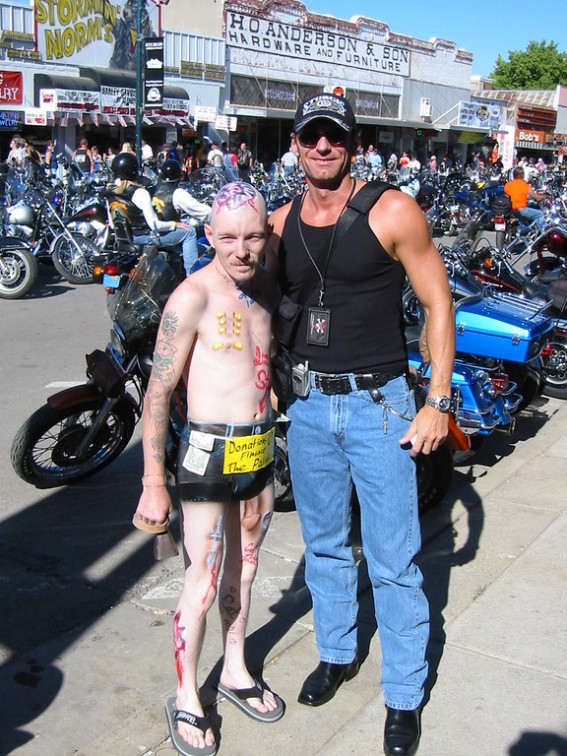 I hope you have enjoyed seeing some photos of the sights you see at the Sturgis Rally each year.

You can see the rest of my travel photos and videos by going to my website.

You can find more information about South Dakota by going to this website.