On one of my visits to San Francisco, I decided to go see Alcatraz Island.

Myself, and a few friends I was working with at the time, took the tour boat over from the Fisherman’s Wharf area.

It’s a short ride and before you know it, you’re there.

The federal prison on Alcatraz Island in the chilly waters of California’s San Francisco Bay housed some of America’s most difficult and dangerous felons during its’ years of operation from 1934 to 1963. 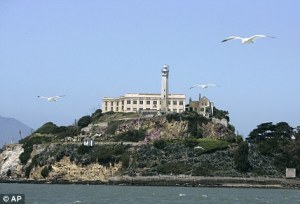 No inmate ever successfully escaped The Rock, as the prison was nicknamed, although more than a dozen known attempts were made over the years.

Today, historic Alcatraz Island, which was also the site of a U.S. military prison from the late 1850s to 1933, is a popular tourist destination. 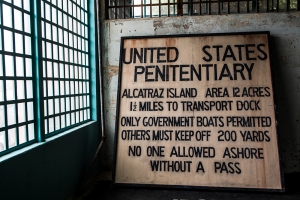 The Federal Bureau of Prisons viewed Alcatraz as “the prison system’s prison,” a place where the most disruptive inmates could be sent to live under sparse conditions with few privileges in order to learn how to follow rules, at which point, they could be transferred to other federal prisons to complete their sentences.

According to the Federal Bureau of Prisons, Alcatraz typically held some 260 to 275 prisoners, which represented less than 1 percent of the entire federal inmate population. 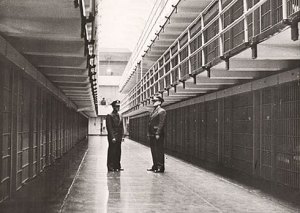 There was one area that we visited that was the Solitary Confinement area.  That’s the next photo.

It was here that it got especially cold with the doors facing the wind and large gaps under the doors.

One of the worst things about Alcatraz is the noise.  By that I mean, the prisoners could hear people across the water partying, drinking and carrying on at night.

What a totally depressing thing.  You’re locked up for a long time, or even for life in some cases, and you have to hear people nearby, across the water, having the time of their lives while you rot in prison.

Many don’t know this but the guards and their families also lived on the island.  Can you imagine growing up on Alcatraz Island as a kid.  What a very unique experience. 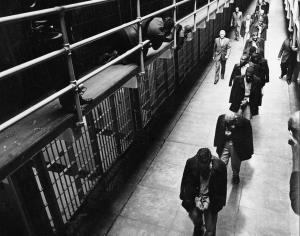 Here’s a photo of the prisoners in the dining area.  I bet the food was horrible. 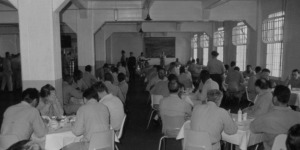 The prisoners also had jobs while incarcerated.  Here they are sewing something, 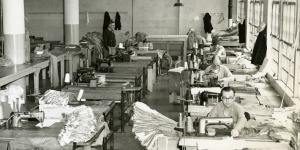 This next photo is of the hospital.  I can’t imagine you received real good medical care while at Alcatraz.

This is a picture of the yard.  You’ll notice the prisoners wearing coats because it’s chilly even in Summer in San Francisco.

Here’s some photos of the cells.  If you do the crime, you better be ready to do the time. 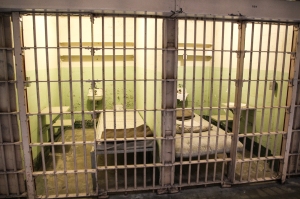 Can you just imagine what life in a small cell like this was like. Prison is not supposed to be easy, in order to punish someone for their crimes.  Alcatraz was not easy. 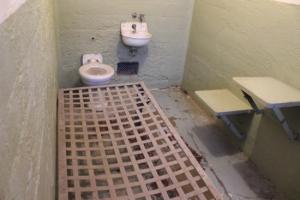 I bet these toilets were horrible and personal hygiene was hard to stay on top of.

You basically exist in a small bathroom, smells and all.  No Glade back then, lol.

If there was ever an inmate who was destined to escape from Alcatraz, it was Frank Lee Morris.

In the movie entitled “Escape from Alcatraz” starring actor Clint Eastwood, Morris was accurately portrayed as the keen and brilliant mastermind of one of the most famous prison escapes in history.

The escape plan took several months to design, and it would necessitate the fabrication of clever decoys and water survival gear.

Here’s a photo of the holes they made.  Notice the fake wall to the left of the hole.  That was used to conceal the hole from the guards while they worked on it.

Frank Lee Morris had spent a lifetime navigating the prison system before his arrival on Alcatraz.

Morris was credited by prison officials as possessing superior intelligence, and he earned his ticket to Alcatraz by building an impressive resume of escapes.

Here’s the other cell with a hole.

In case you’re wondering how these holes could have been concealed so well… here’s a photo of one of their cells.  Lots of clutter to help hide their work. 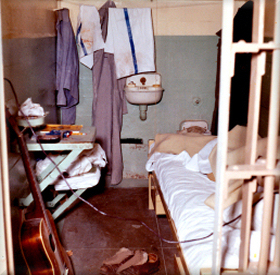 The plan was extremely complex and involved the design and fabrication of ingenious lifelike dummies, water rafts, and life preservers, fashioned from over fifty rain coats that had been acquired from other inmates – some donated and some stolen.

The heads were crude but lifelike, and were constructed from a homemade cement-powder mixture that included such innocuous materials as soap and toilet paper.

They were decorated with flesh-tone paint from prison art kits, and human hair from the barbershop.

Here’s one of the heads they made to fool the guards.  It’s been said that necessity is the mother of invention.  They needed to escape and they came up with these heads to aid them in their quest. 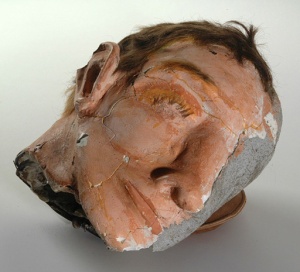 This is a photo of one of the dummies in bed as the guards would have seen them.  It looks realistic and would fool a lot of people. 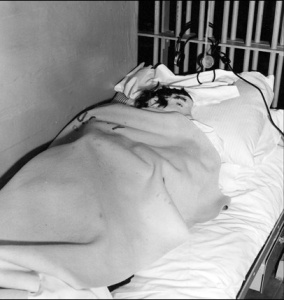 The FBI doesn’t believe that they made a successful escape. Here’s some of their reasoning why the escape didn’t work.

The formal plan was to steal a car and then perpetrate a burglary at a clothing store. No reports of any such crimes were filed in Marin County within a twelve-day period following the escape.

Sources reported that these three men had neither friends nor relatives with the financial resources to come to San Francisco and assist in the escape.

There would have been no way to communicate with outside contacts in order to confirm the date of the break and the progress of their preparations.

I guess you could assume that they drowned, but their bodies would have been found floating in the area.

And last, they could have been eaten by sharks.

I’ve saved one of the best facts about Alcatraz for last.

Among those who did time at The Rock was the notorious Prohibition-era gangster Al “Scarface” Capone, who spent four-and-a-half years there during the 1930s.

According to the biography “Capone” by John Kobler, Capone once told the warden, “It looks like Alcatraz has got me licked.”

I hope you’ve enjoyed this look at Alcatraz Island.  I enjoyed my visit there and would go back again.  If you’re ever in the Golden Gate area, you should visit Alcatraz.  I know you’ll enjoy the tour.

Until next time, be safe and have a chill day.