A big part of NASCAR is merchandising.  The following photos are of some vintage merchandise haulers.

Dale Earnhardt Jr. always won the Most Popular Driver and his sales were enormous.

Jeff Gordon is another driver that was very popular during his driving career.  Now, he and Dale Jr. are NASCAR commentators for television.  And still very popular with the fans.

Merchandising haulers travel tens of thousands of miles every year attending every race of the season.

Budweiser never had it so good as when Dale Jr. was driving for them.

Here’s a shot of the haulers before they opened and before the crowds.

The average salary for a NASCAR truck driver is $38,717 per year. 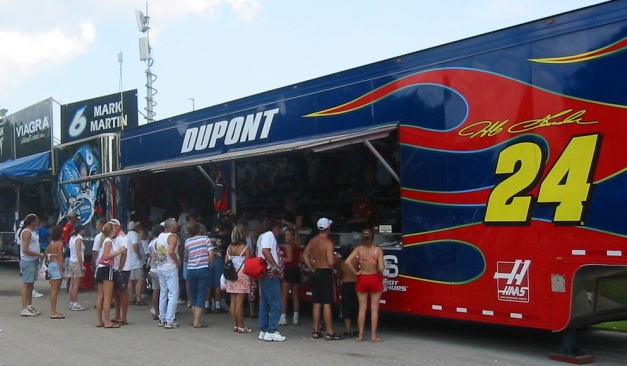 That’s not a huge salary considering how important they are to the team, the driver and the sponsors.

Dale Earnhardt Sr. had an estimated net worth of $70 million at the time of his death at the Daytona 500 in 2001.  Merchandising helped that a lot.

Dale Jr. has an estimated net worth of $300 million.  Not bad for signing thousands of his race cars for fans, among other things.

Jeff Gordon’s net worth is estimated to be $200 million.

Dale Jr. ended his career driving for Hendrick Motorsports.  Not as flashy as the Budweiser haulers.

In this photo on his hauler, Dale Jr. is signing some of those race cars I just spoke of.

Dale Jr.’s first name is Ralph and his nickname is Lil’ E. (For Earnhardt).

The only track Gordon didn’t win at during his career is Kentucky Speedway.

Dale Jr. only read a half of the book written about him.  He says that since he already lived all the experiences, the interest level was just not there for him to continue the book.  He still thinks the author did a good job, though.

Here’s a shot of Gordon’s hauler before the fans get there.  Good pix.

One of the best things about a NASCAR race is getting there early and going shopping for cool NASCAR stuff.

Here’s a photo of the Event Pins I have from some of the races I attended and worked.

I collected some of the cars I worked with during my time in NASCAR. 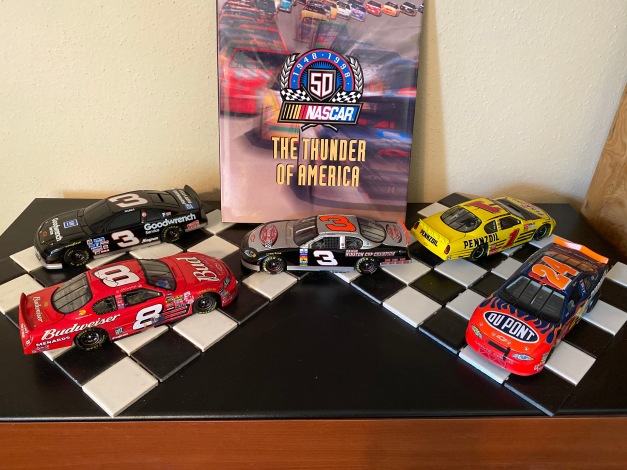