Halloween is my favorite event during the year.  It always has been, since a child.

On Christmas, you get presents and that’s cool, but on Halloween, you get a bag full of all kinds of candy.  A kids’ utopia.

Anyway, as I grew older, I started doing different things on Halloween and not going out for candy.

If there was mischief to be had on Halloween, I was a part of it.

Then, when I grew up and could start drinking… well that added a whole new element into the equation.

Many people go to Halloween parties and those are fun also.

Here in Houston, they have a Pub Crawl in the Montrose area of the city.  It’s a lot of fun.

All of the bars turn their parking lots into outside drinking areas with bars to serve that are set up all around.

I try to go when I can and photograph everybody for my website, to show others what it’s like if they couldn’t be there.

When I was traveling all of the time, occasionally Halloween would occur when we were out of town.

This was an added bonus of my job, being able to party in different cities for Halloween.

One year, I got the idea that I wanted to be Braveheart.  This was before Mel Gibson got into all of that trouble and ruined his career.

I went to a fabric store and bought what I needed and had some big black boots that would work.

Next, I went out and got a wig.  It didn’t look like Mel’s hair but it was a wig none the less.

Finally, I went to a Halloween store and picked up the blue face paint.  If you don’t have the blue face, then you’re not Braveheart.

Over the years, I was out of town for Halloween several times.  I liked my Braveheart outfit, so I figured I’d show Braveheart to each new city.

I think the first place was Los Angeles.  We went to a bar on the SunSet Strip called The Key Club.  We had such a fun time.

At one point, I got kicked out for making the bouncer look stupid.

Once I was out on the sidewalk, as Braveheart, I realized my friend, Epstein (from Welcome Back Kotter) had all of my money and ID.

Now I was screwed.

This club kicked everybody out at 10pm, then reopened a short time later and you had to pay another cover charge to get back in. What money hungry weasels they were.

When I realized I was screwed, I turned and went straight to the window where you pay the second cover charge.  I heard lots of people yelling at me for cutting this huge line.  I didn’t care… I was Braveheart damn it.

I told the lady my problem and she let me back in, where we proceeded to have more fun in a club than I can remember.

That was L.A., next was Phoenix, Arizona.

Myself and the people I was with were doing their Pub Crawl when I walked out onto the back patio of this bar.

When everybody turned and looked at me as Braveheart, you could have heard a mouse fart.

Then all of a sudden, there were huge cheers, hugs and free beers all around.

Here are the guys I ran into in that bar.  We look like Braveheart and the extras on the set of the movie, lol. 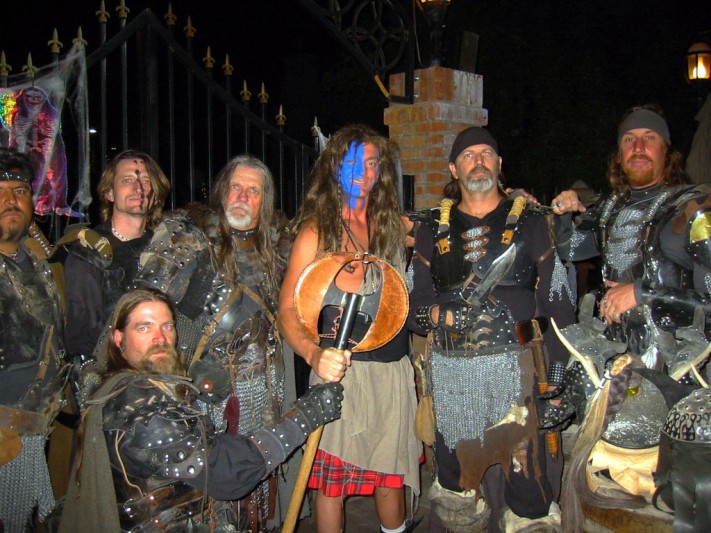 I only wish is that the person taking the picture would have taken a wider shot, because there were a lot more guys than the ones in the picture.  Probably twice as many than you can see.

I don’t think an experience like that will ever happen to me again the rest of my life.  As the saying goes, “A once in a lifetime moment”.

Here’s some more photos from Phoenix. 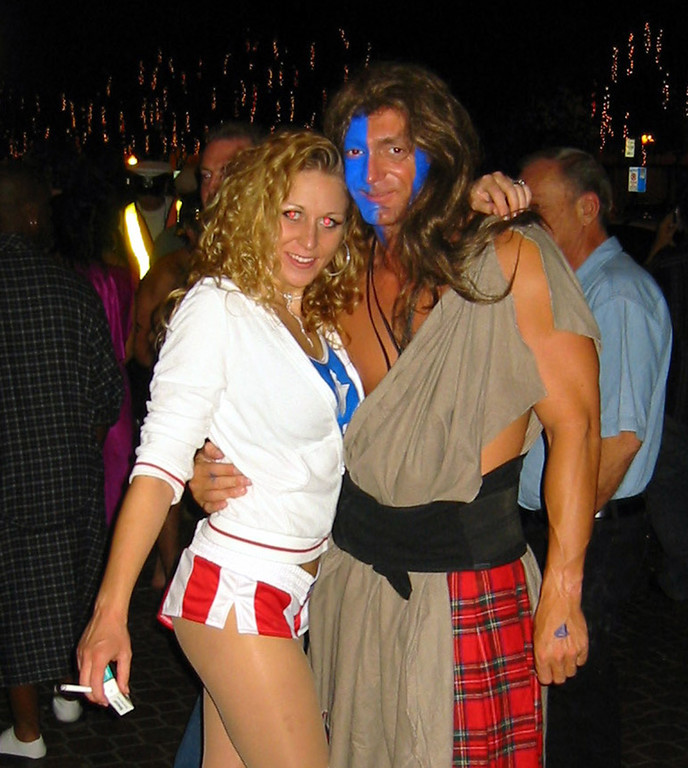 Check out the helmet in the bottom right of this picture.  These guys handmade all of their gear and had a club associated with it.

Braveheart and the Queen.

I forgot to mention, I used a weight lifting belt around my waist to hold it all together and braided the small part of the wig like Braveheart’s was. 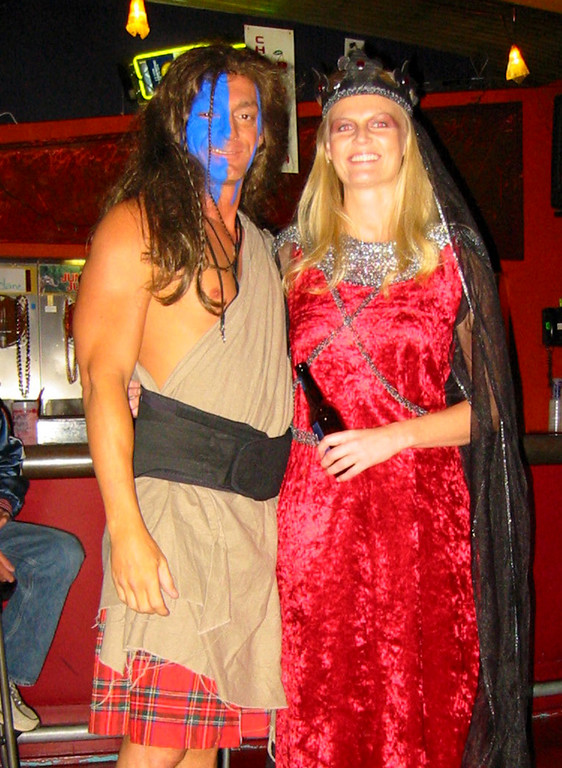 This photo was snapped right before I went to jail.

Just kidding.  I didn’t go to jail, but it was close.  No cop likes a drunk,  smart ass, Braveheart.  I found that out.

Phoenix was such a good time as Braveheart that I decided to bring him to Vegas the next year when I was in Sin City for Halloween.

I went down to the bar when I got ready and I was earlier than my companions, so I thought I’d have a drink.  To wet the whistle, if you will.

I sat down at the bar and immediately the conversation turned to me as Braveheart.

The bartender takes my order as I chat with these strangers.

The next thing I know, the bartender is handing me a tall glass of my drink and says it’s on the house.  Now Vegas is known for expensive drinks, so this drink was easily $15 or $20 if I had to pay for it.  And this one was so strong it was like turpentine, lol.

I took the straw and drank almost half on my first swig.  Boy was I gonna have the time of my life in Vegas shortly.

Another few minutes go by and I’m about to leave because I finished that very large glass of Jim Beam and coke.

Before I can leave, the bartender puts another large glass in front of me… so I sit back down and start on this one.

I’m trying to get out of there so I’m using two straws and drinking like a madman.

Believe it or not this happens again and I’m too polite to refuse or too drunk to care at this point, so I drink a third huge, very strong Jim Beam with a little coke added.

After these three really strong drinks in me, I was doing okay.

I went to the valet area to meet my friends.

As I was out by the large area with all of the people coming and going in and out of the casino, all of that Jim Beam hit me like a ton of bricks.

A few seconds later, my friends walk up.

I knew I was in trouble when I tried to speak and slurred my words.

The first thing they said was “Uh, you’re not driving, right?”.

So now I’m in the back of this van and having downed probably more than half a bottle of Jim Beam in such a short time, I was getting really drunk.

Our next stop was to go to dinner.

They had reservations at a nice restaurant and I walked in as a slurring, stumbling Braveheart.

We sat down and I was getting worse by the second.

Finally, my little personal alarm went off and I knew I had to get out of there.

I got up and just staggered out.

Once outside by the valet area, I got in a cab.

I immediately laid down on the back seat.

The cab driver asks me where I’m going.  First I say one casino. Then, in a brief moment of clarity, I remember we’re staying at the MGM.

Now the next thing I remember is waking up in my hotel room the next morning with my pillow covered in blue face paint.  I vaguely remember stumbling on the elevator and making it to my room.

That was the last appearance of Braveheart.  Then Mel Gibson went off of the deep end and now hardly anybody wants to be his character for Halloween, whereas before, I always saw lots of fellow Bravehearts.

If there is a lesson to be learned from my experiences as Braveheart… quit when you’re ahead.

Los Angeles and Phoenix were going to be hard to beat and I think I was so fired up about Vegas that I let that bartender over serve me drastically.

I haven’t had as much fun as I did in L.A. and Phoenix since.  I need to come up with another costume that was as fun as being Braveheart.

Maybe one day I’ll try Vegas again, but the next time I’m not going to the lobby bar in costume, lol.

4 comments on “A very Braveheart Halloween”