In this NASCAR 101 Course, we’ll take a trip through a NASCAR Infield to see what we can see.  And you will see how hard it is to get drunk NASCAR fans to wave on the count of three.  It’s not as easy as you think.

First, as I said, they’re drunk.  Or at least been drinking a lot.

And Second, you’re in the Infield and the noise is loud.  Ever try yelling over race cars?

The following photos show you how much fun a race fan can have while at a NASCAR race.  These pix were taken at Texas Motor Speedway, so thanx to the Texans, who always show up big.

Companies in Racing, spend tens of millions of dollars to promote their particular product or services.

One of the multitude of things they spend money on is Bannering.  They hand out thousands of Banners each year.

When a Race Fan is lucky enough to get a cool one, they hang on to it and use it at every race for decorations of their camps.

If it’s one thing NASCAR fans are, it’s Patriotic.  Their blood runs Red, White and Blue. 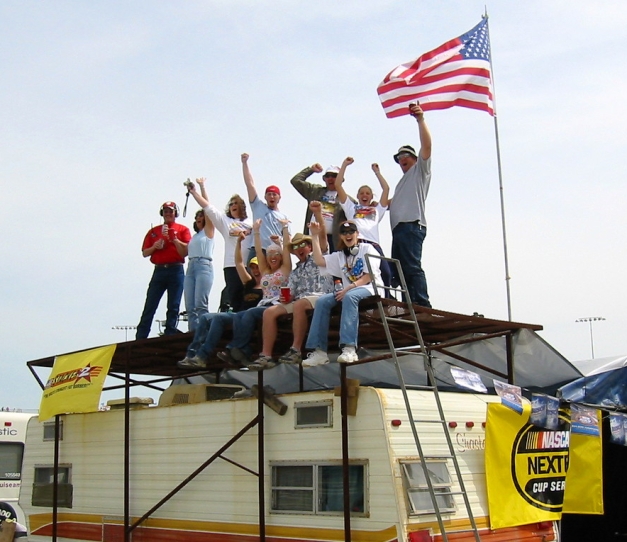 Notice they’re using some of the Pennant Rope I gave out.

Do you think they were Dale Jr. fans?  Still are, even though he’s no longer racing.  Across the country, there were quite a few fans who painted their buses in Tribute to Dale Earnhardt, Jr.  This was one of the finest I ever came across. 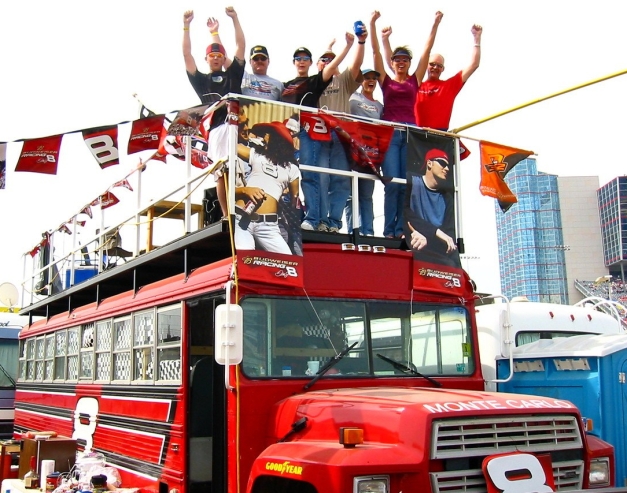 The most important thing about this design?  A secure railing.  I think it needs more rails before I’d drink up there and try to sit down.

I’ve thought for a long time, that NASCAR has surpassed Baseball as America’s Pastime.  Get on that.

This is one of the funniest I’ve seen.  Oh and, don’t ask this type to wave.  You’re wasting your time.

The best ones always get 2 shots of it.

Here’s another one that I wouldn’t personally get on top off.  Maybe it’s just me, but I don’t like hospital trips while I’m gettin’ my NASCAR on. 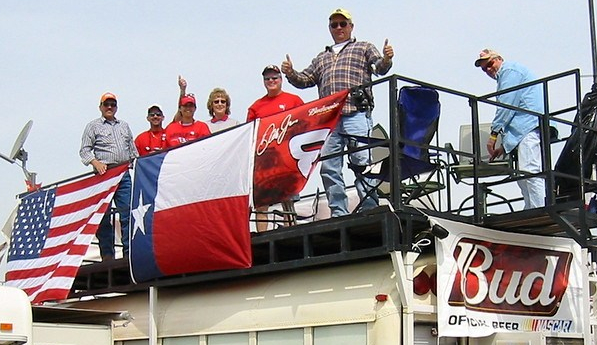 Maybe it’s because I’m getting older, but there’s quite a few campers or platforms that I wouldn’t get on top off.

This is a high dollar Banner.  It’s a good color, it’s Budweiser so it’s cool because of that, it’s got a great logo of a gold crown, it says Racing and it’s a Welcome Race Fans Banner.  Budweiser gets a Passing Grade for this Banner. 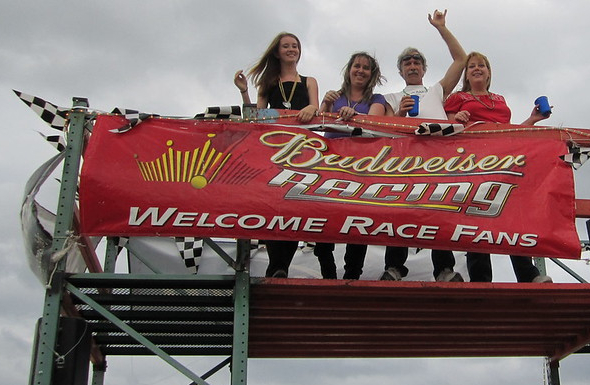 Now here’s what I’ve been doing.  I yell up my intentions of getting a photo when they cheer.

Some hear me, some don’t.  If you are a shy person and can’t talk to strangers, much less yell up to 20 or 30 of them, then Motorsports isn’t for you.

It’s a good feeling when it pays off. 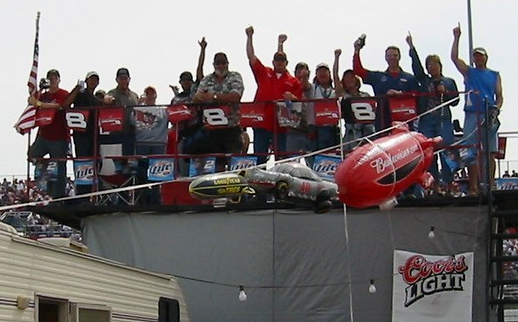 These next 2 photos are of Banners I passed out in previous years. 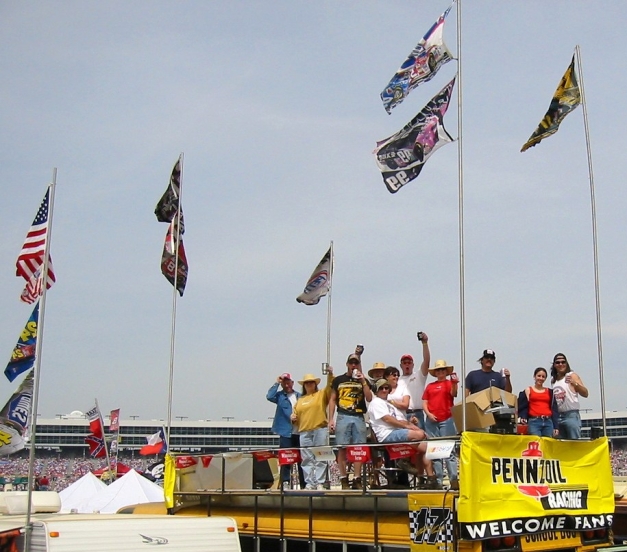 Good Banners have a long life.  And if they’re great Banners, they’ll last a long time or until they’re stolen. 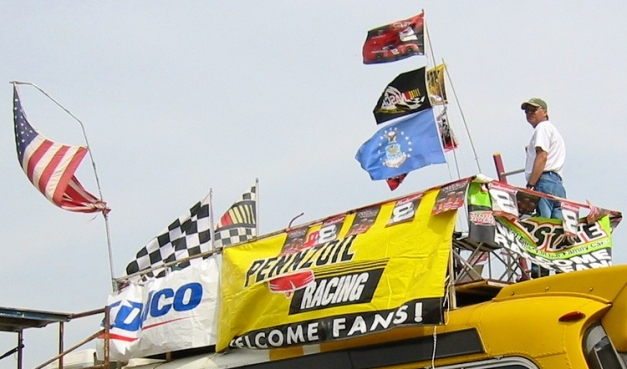 These 2 groups had a nice set-up. 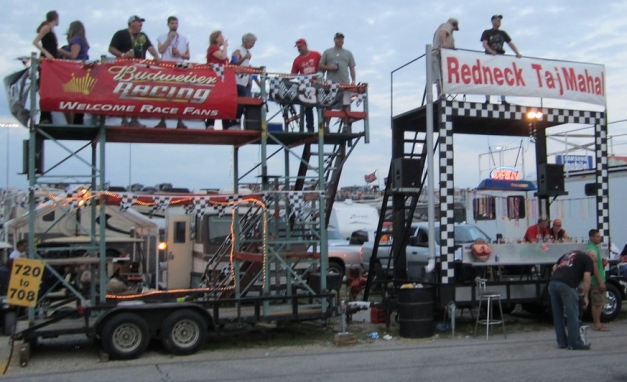 They had a good system working.  Since there is no way they could ever get a Liquor License, they just gave the beers and drinks away.  The catch, people were tipping them $3.00 for a beer and $5.00 for a mixed drink.

I love when campers use a lot of Flags.  It really makes it feel like an Event. 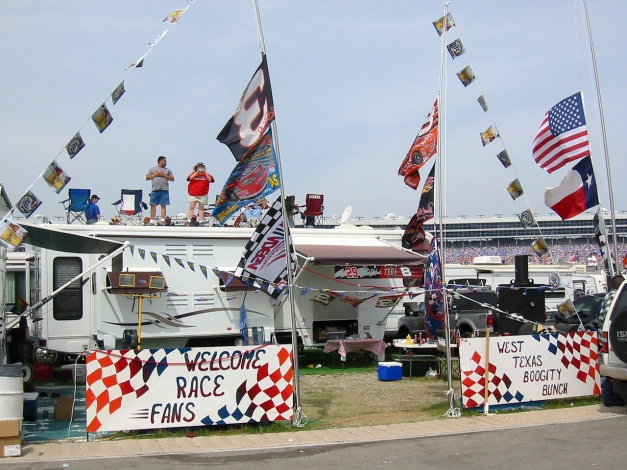 This was a nice set-up.  Two Motorhomes for sleeping and getting out of the heat and a great Partying area out front.  Considering this and the Flags, they get a high mark for this camp.

If you decide to camp out in the infield of any track across the country, be prepared to know your neighbor quite well.  The camps can be close at times.

But you can have a pool… until Ernie pees in it again, lol.

Some like the ‘Comforts of Home’.  Why not bring your living room to the track?  Great for chillin’.

But when you have gas, they make you sit over here.

Don’t come a knockin’ if the camper is rockin’.

You could meet Bo Derek in the Infield. 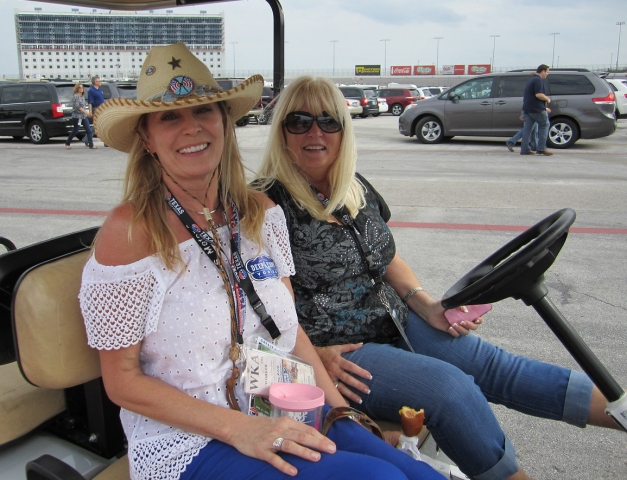 I got a nice shot of these gals with a great background of the Tower, the Flag and the crowded seats.

Then they asked for a ‘Close Up’.  I like their choice better. 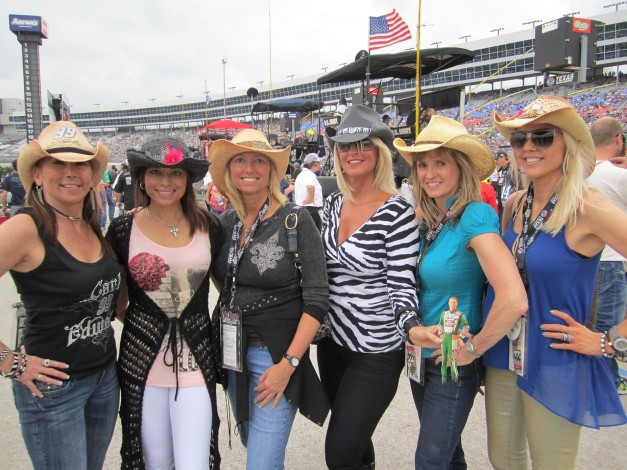 The reason NASCAR and the companies associated with it love Race Fans is because they spend money.  With their jackets, hats, shirts and whatever is in their bags, they are carrying close to $2,000 worth of Racing Gear.

I’m always happy to see servicemen and servicewomen enjoying some valuable time off from protecting this Great Nation.

I like that they bring guns for their presentation to the audience.

That truck has been autographed a couple of times.

It’s funny because Jeff Gordon never drove the truck in the Truck Series.

He was more than proud to turn his head to the side so I could get a good shot of the truck.

I count 8 people on this golf cart.  Tough number to beat.

Where else can you wear a Beer Hat and no one takes a second look.

Dale Earnhardt, Sr. was a great driver that is tied for all time championships with Richard Petty and Jimmie Johnson.  All three have 7 titles.

Dale was killed in a terrible crash at the Daytona 500.  Millions of Race Fans mourned that day.

To this day, fans pay tribute to Dale, ‘The Intimidator’ Earnhardt.  He drove a black car and was NASCAR’s ‘Man in Black’.

These next few photos are of some people’s tribute to #3, Dale Earnhardt.

Cooking in the front.

Wood in the back.

This is a Volkswagen ‘Thing’.  I shit you not.  And what’s worse is it came factory orange, not kidding.  This is absolutely the coolest Thing I’ve ever seen. 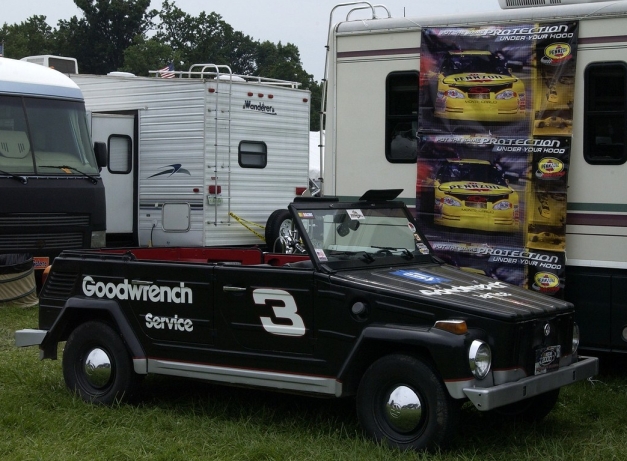 This is a very cool hood.

Here is the side of it. 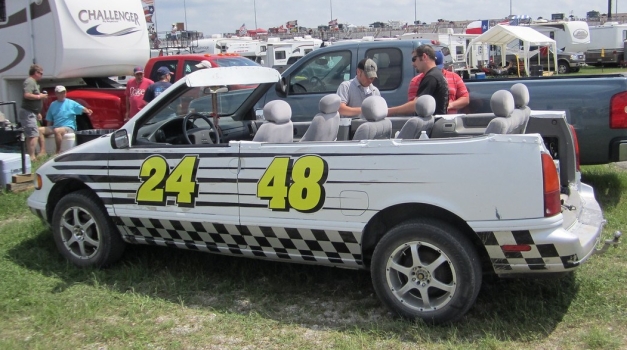 Notice the #3 on the rear Quarter Panel for Dale and the #8, for Dale Jr., on the back seat. 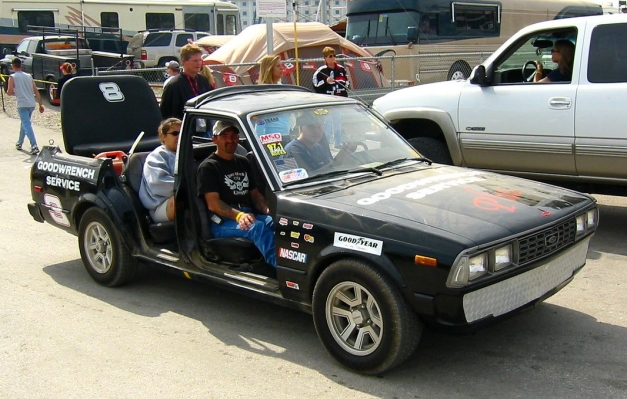 This Jeep is one of the best vehicles I’ve ever seen at a track.  What a cool way to get around.  This is my Fantasy Car. 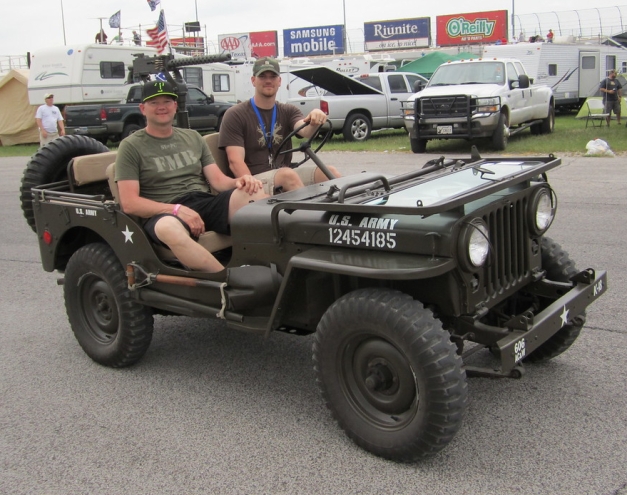 Here’s a pretty good way to Drink & Ride while in the Infield.  Plus, he’s wearing Mardi Gras beads and flashing me the ‘Rock n Roll’ sign. 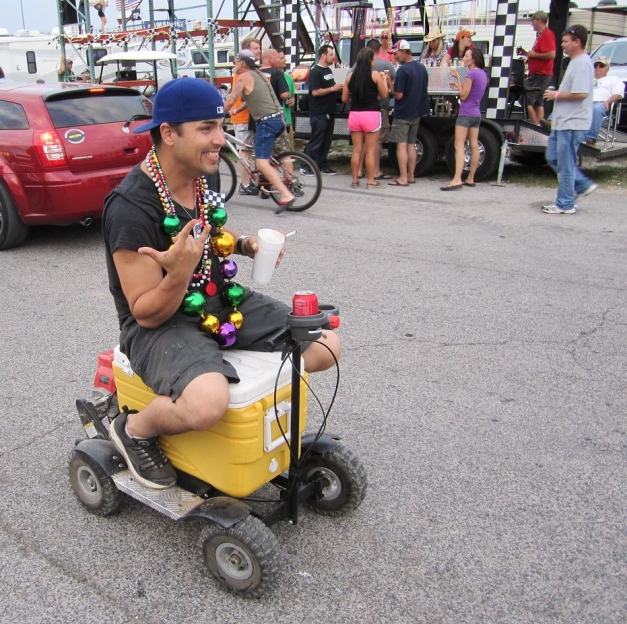 And no, those aren’t sodas in those cans.  It’s got to be a pretty laid back atmosphere in the Infield when you can go get ice while drinking your beers.

You didn’t think I was going to leave without a pic with the Thing, did you?- 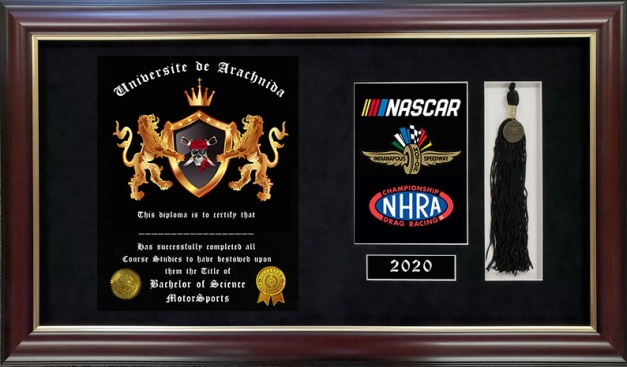