Every year, Pasadena, Texas hosts the Annual Strawberry Festival.  It’s a fun time and I try to go when I can.

One of the coolest things about the festival is that there are Helicopter rides offered.  They cost $25, but it’s well worth it if you like helicopters like I do.  Plus, I get some great video of the festival from the air.

You get a great view of the Mud Volleyball games. 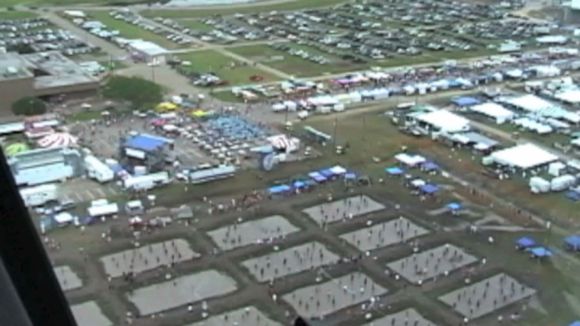 I’ve done this flight twice now and I love it. 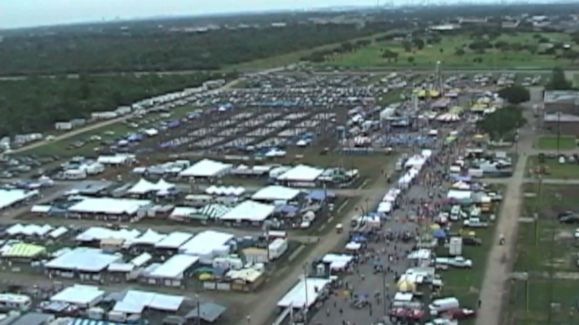 There’s always plenty of food booths that offer all kinds of things to eat.

This booth was serving fried alligator. 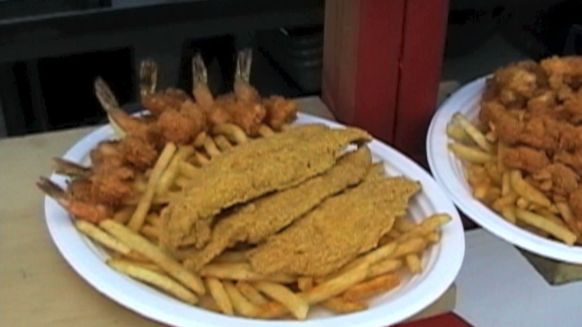 They also had fried shrimp.

I love event food and eat some every time I go somewhere.

This booth was selling strawberries and they looked really good. 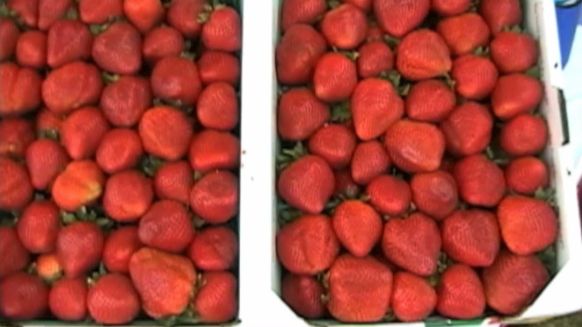 These were some really large tacos.

I didn’t try the Chocolate Dipped Cheesecake, but it sounded delicious.

The festival has a Midway with games and rides.

The kids enjoyed the Shooting Gallery.

You could test your strength by trying to ring the bell at the top with the large mallet.  I tried this once at the Texas Renaissance Festival and embarrassed myself, so I’ll never try that again, lol.

This is the game where you try to get a small loop on the top of a bottle.  It’s hard as hell. 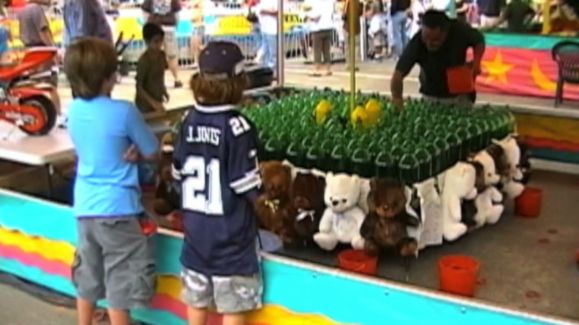 You could pop balloons with a dart for prizes.

The stuffed animals were nice, but I’d hate to win one and have to carry it around all day.

The carney’s were nice. 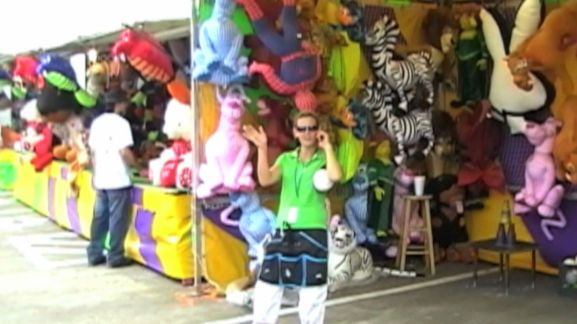 They would wave back to me when I waved to them. 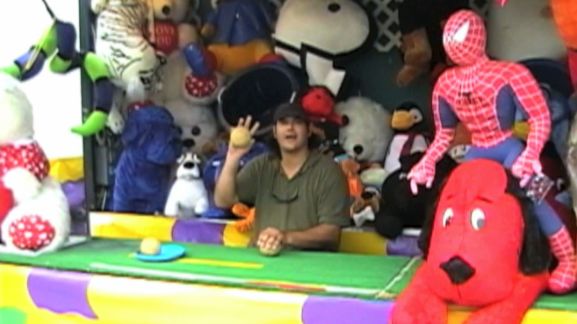 Except for this guy.  When he saw me videotaping, he immediately covered his face.  He’s wanted for something somewhere I bet, lol. 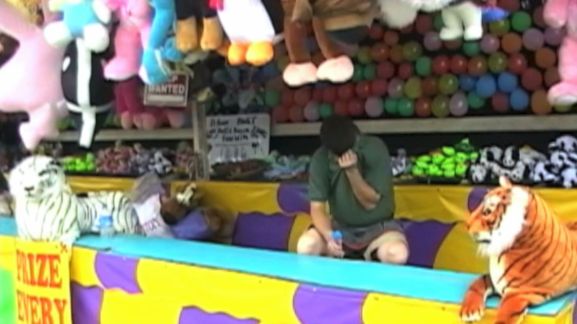 This guy let me throw a dart for free.  I threw it with my left hand because the camera was in my right hand and failed miserably.  I’m right handed.

It was nice to see young and old alike enjoying the activities on the Midway.

In Texas, they start ’em out young with tattoos.

When I was a kid, the Bumper Cars were one of my favorite rides.

This ride is called the Zipper.  Or it was called that when I was a kid.  I was always scared of it.  I finally got up the nerve to ride it one time and that was enough for me.  I never rode it again.

I might ride it once again and videotape the ride just to show you how much you flip and spin in it.  It’s a rough ride and scary as hell when you think about the door coming open because the carney’s didn’t put it together properly. 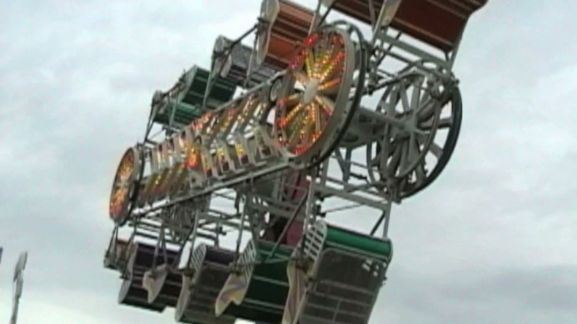 This guy was trying to knock over the three cans.  He left one standing.  It’s another game that is almost impossible to win. 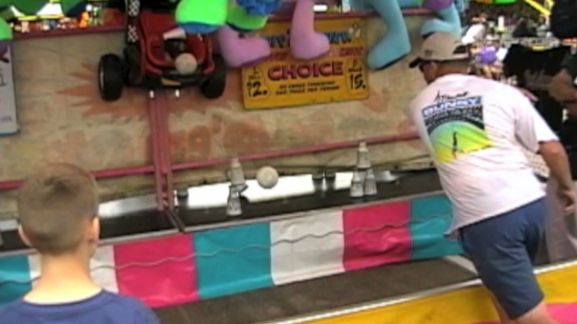 I was happy to see that the Boats are still a ride at the Carnivals.  I loved these rides as a small child.

The Cars were another favorite of mine when our Annual Fair came to town.

I enjoy walking around the Midway at the Pasadena Strawberry Festival.  It’s fun to watch the people playing games and riding rides.  It’s also great ‘People Watching’ as well. 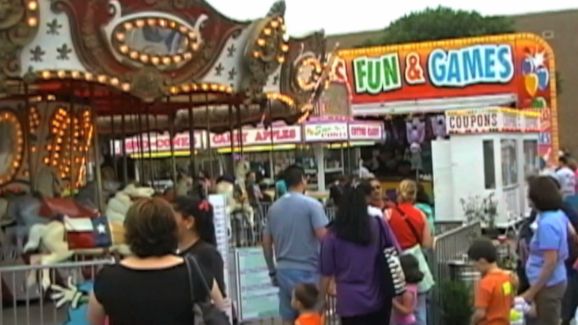 The Mud Volleyball tournament is held every year at the festival.

I had never seen Mud Volleyball before and I was thoroughly entertained by watching it.

There were 16 courts, or should I say mud holes.

The referees were always cute.

You would see families, companies and friends competing on teams and they were all enjoying the hell out of it. 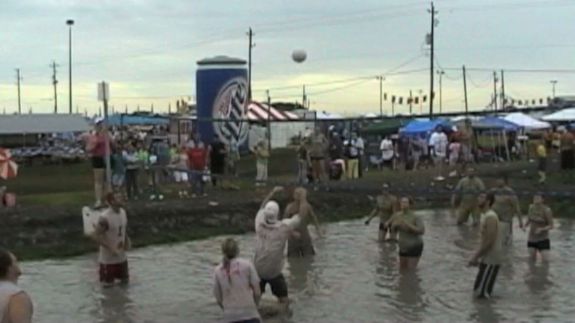 There was a shower nearby to wash off after your game. 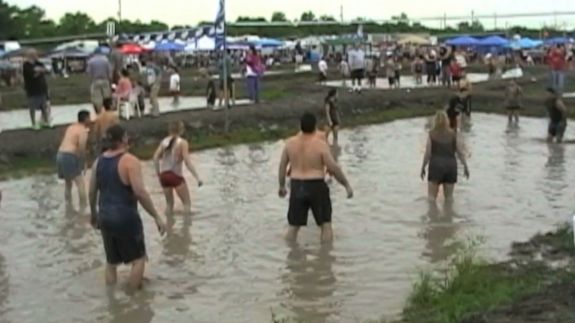 Here was another cute referee. 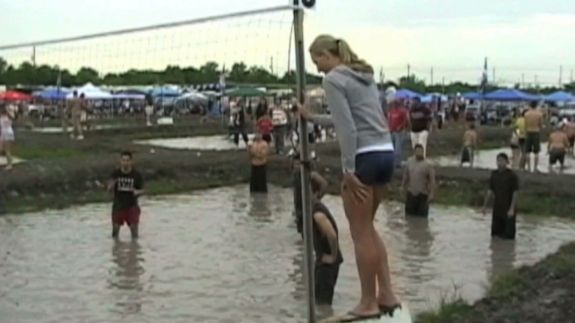 I don’t think I would play in this tournament at my age, but when I was younger I bet I would have loved it.

All in all, the Pasadena Strawberry Festival is a real fun time.  If you ever get the chance to go, I would suggest you do so.  You’ll enjoy the food, the games, the rides and watching the Mud Volleyball tournament.

I hope you’ve enjoyed my article about the Strawberry Festival of Pasadena, Texas.

You can see over 25,000 more photos from my travels and events on my website, as well as all of my videos.