The Eiffel Tower was built by an engineer named Gustave Eiffel.  The French call the tower “La Tour Eiffel”.  It is an iron lattice tower that was erected in 1889 as the entrance arch to the 1889 World’s Fair.  It was criticized by France’s leading artists and intellectuals because of its’ design and was supposed to be taken down after the fair.  It has since become a global cultural icon of France and one of the most recognized and visited structures in the world.  It’s the most visited paid monument in the world and about 7 million ascend it each year.  The tower received its’ 250 millionth visitor in 2010.

The tower became very useful during WW 2 with the antennae attached to the top of it for communication and so they were glad they didn’t take it down.  It is 1,063 feet tall.  That’s about as tall as an 81 story building.  The tower surpassed the Washington Monument during its’ construction as the tallest man-made structure in the world and held the title for 41 years until the Chrysler building in New York was built in 1930.  Because of a new aerial added to the top in 1957, the tower is now taller than the Chrysler building by 17 feet.  If you don’t include the broadcasting aerials, it’s the second tallest structure in France, after the Millau Viaduct.

The Eiffel Tower has three levels.  There are restaurants on the first two levels.  The top level for tourists is 906 feet above the ground and the highest accessible area to the public in the European Union.  You can take the stairs to the first and second levels or take the elevator.  If you take the steps, there are 300 from the ground to the first level and 300 more from the first to the second level.  I’ve been to Paris 3 or 4 times now and I always go visit the tower.  The first time I only made it to the second level because the line for the elevator to the very top level was so long.  I enjoyed the first and second levels because of the shops and restaurants.  The view is good and there is plenty of room to walk around without seeming to be too crowded.

I videotaped the ride up on the elevator and believe me, it’s a long ways up in the air.  Most people don’t know that Gustave Eiffel had a small apartment on the top level where he would bring guests.  He also did many experiments from the top area about weather conditions, etc.  The photo below is from the top of the tower where the French have placed a life-like mannequin to resemble Gustave Eiffel in his little office on the top of the Eiffel Tower.

The view from the top of the tower is spectacular.  You’re able to see for miles in every direction and take in the view of Paris.  I took several pictures of Paris from the top and you can see one below.

This picture below is looking straight down from the top of the tower. 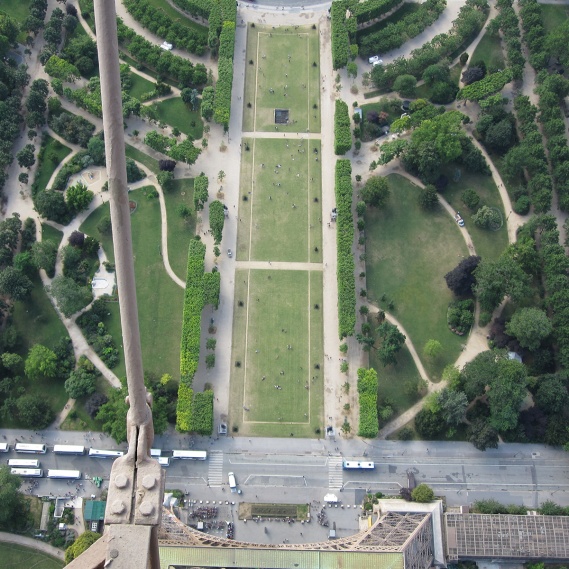 The Eiffel Tower had lights added to it so at night it lights up and also flashes every hour for about 5 minutes.  The picture below was taken on one of my trips during Christmas time.  Paris can get pretty cold in the winter months.

Out of all the places I’ve been and all the monuments I’ve seen and photographed, the Eiffel Tower is by far my favorite.  Many think Paris is a very romantic city and I’d say they’re right.  Although I’ve never had the chance, I’m quite sure that sitting on the grass near the tower during the summer with a bottle of wine, some bread and cheese and your favorite someone watching the lights of the tower twinkle above would be extremely romantic and often lead to a kiss or two.

On any given day, there are many people milling around the tower.  The picture below shows you how big the base of the tower is and shows a large amount of people near the bottom or on the street nearby.

It’s a great place to people watch and you hear people speaking languages from all over the world.  It’s a great mix of nationalities and cultures.  The spring and summer are the best times to visit because of the pleasant weather.  The trees are green and the flowers are in full bloom.

I have a great video of the Eiffel Tower on my YouTube Channel that also has narration.  I tried to put the YouTube link on my Blog Posts but WordPress won’t let me do it so you’ll have to go to my website to see more photos and video of the tower.  The video is well worth your time.

I definitely plan on returning to Paris and visiting the Eiffel Tower again. It is a monument that never seems to go out of style and with the lights added it just looks unbelievably beautiful at night.

As always, I hope you have enjoyed reading my article and maybe you found something out about the Eiffel Tower that you did not know before. 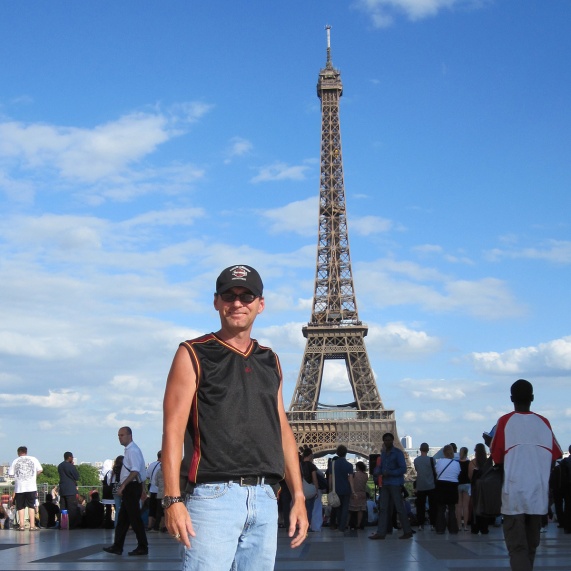